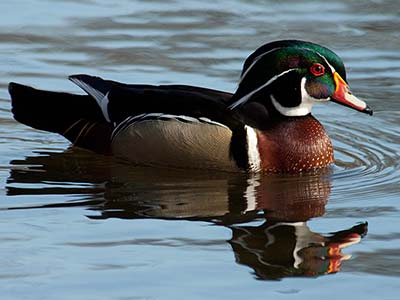 As the lakes thaw at the Garden in March and April, migratory ducks stop to feed and rest on their journeys to their northern breeding grounds. It's the perfect time for visitors to study the beautiful nuptial plumages of these water-loving species, as well as their interesting feeding and courtship behaviors.

The next time you see a duck at the Garden, notice how it is feeding: Is it sticking its rear end up into air? Does it dive into the deep part of the water? When it leaves, does it spring up easily into the air or does it seem to run on the water, pattering its feet until finally it's airborne? The answers to these questions separate the ducks into two categories—dabblers and divers.

Ducks that spring right from the water and that tip their bills into the water while feeding are called dabbling or puddle ducks. They prefer ponds, sloughs, and rivers with shallow water. They use their broad bills, which have fine, comblike fringes along the edges, as strainers to scoop up food without swallowing water. They will also put their bills down to reach for food from the lake, including aquatic vegetation and invertebrates as well as small mollusks, crustaceans, and fish. 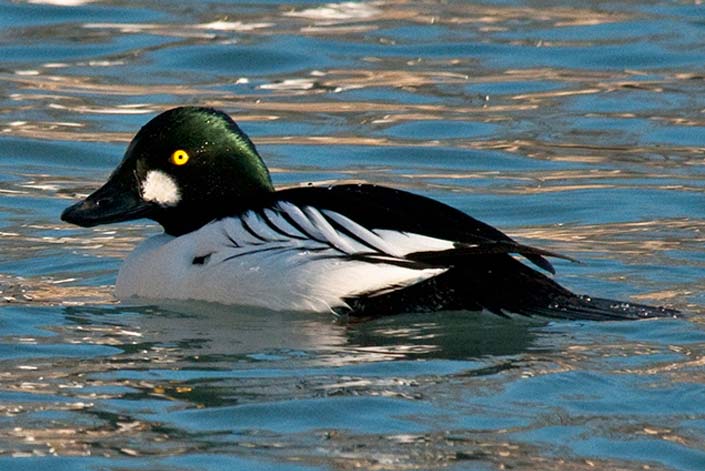 The divers prefer larger, deeper bodies of water, where they can propel themselves in the water to grab crabs, crustaceans, and other aquatic meals. Compared with the dabblers, diving ducks have short legs farther back on the body, which enhance their swimming and diving capabilities but make it difficult to walk. To take off from water, they have to patter on the surface, like a plane on a runway, before becoming airborne.

Since the lakes at the Garden are on the shallow side, more dabblers than divers stop here to rest and feed. But the bufflehead, a diver, is one of the more common spring migrant ducks on the lagoon. One of the smallest divers, it may fill the niche of feeding just beyond the shallows where the dabbling ducks feed. Other divers seen at the Garden during migration include ring-necked duck, ruddy duck, redhead, and canvasback. On occasion, you might see a common goldeneye, which can dive to depths of 150 or 200 feet and is more frequently seen on Lake Michigan in the winter and during migration.

Duck migration is dependent on the amount of frozen versus unfrozen water available. After a thaw, take a walk around the lakes and along the Skokie River to see if any dabbling or diving ducks have arrived. 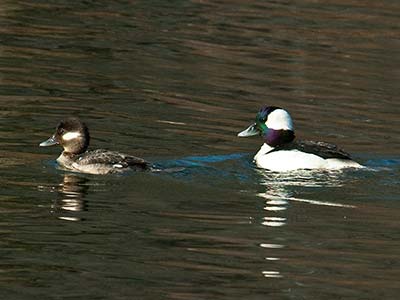 As with most bird species, the male is the more handsome of the duck pair. The males are already in their breeding plumages when they arrive at the Garden in spring, and some are quite colorful. The blue-winged teal, as its name applies, has lovely powdery blue wings, especially visible when it flies. The beautiful male wood duck has a glossy green crested head, purplish cheeks, black and white neck, and purple breast. The northern shoveler looks like a mallard but has a huge, shovel-like bill and a large brown patch on its sides. Visit npwrc.usgs.gov/resource/birds/duckdist/index.htm for more information on duck identification, or use the National Audubon Society Pocket Guide to Waterfowl.