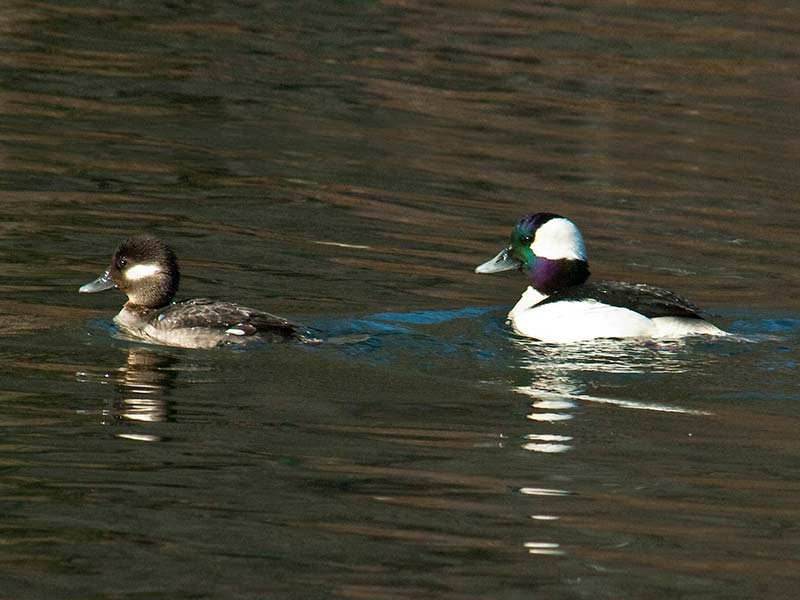 Found in the lakes, this small black-and-white diving duck is distinguished by a big white patch on its head.

The cold November winds signal the return of winter as well as the mass migration of waterfowl in northern Illinois. These birds are flying south, staying just ahead of freezing bodies of water. In late autumn and early winter, the lakes of the Chicago Botanic Garden, as well as the Skokie River, attract migratory waterfowl to feed and rest before they continue their journey. Mallards are plentiful, but careful observers might also discover one or more of a diminutive diving duck called the bufflehead, the smallest diving duck in North America.

You can identify the male fairly easily—look for a small black-and-white duck. The body is mostly white, the back is black, and the head looks half white and half black. Sometimes there is a greenish sheen to his head. The female is more difficult to identify. She has a mostly grayish body, dark head and back, and a small grayish-white oval on her cheek. This bird's oddly shaped head is said to resemble that of a buffalo, which is how this species got its name.

Don't expect these diving ducks to stay in view for long. Before you know it, the bufflehead is diving under water searching for food, then emerging like a submarine in another part of the water.

Buffleheads are considered among the fastest flying of all waterfowl. Their small size and anatomical structure make them look like flying torpedoes. A tiny duck beating its wings rapidly over a lake in November may very well be a bufflehead.

Occasionally, buffleheads will remain in northern Illinois for the winter, but most are gone by early December and won't be back until March, when the ice begins to melt and the aquatic critters below awaken from their winter snooze. The only place to find a bufflehead during extremely cold winters in northern Illinois is on Lake Michigan or other very large bodies of water that haven't completely frozen over.

When the buffleheads return in spring, they'll be flying to forests of the northern United States and Canada, where they choose abandoned holes of northern flickers and other animals in which to lay their eggs.

The bufflehead belongs to a group of ducks called divers; they have short tails and huge feet set well back on their bodies. These features enable them to dive and swim rapidly to catch their prey of mollusks, fish, and other aquatic animals—but they pay a price. Buffleheads, like most other divers, can hardly walk on land. To become airborne, they have to patter along the water on their feet, like a plane on a runway.