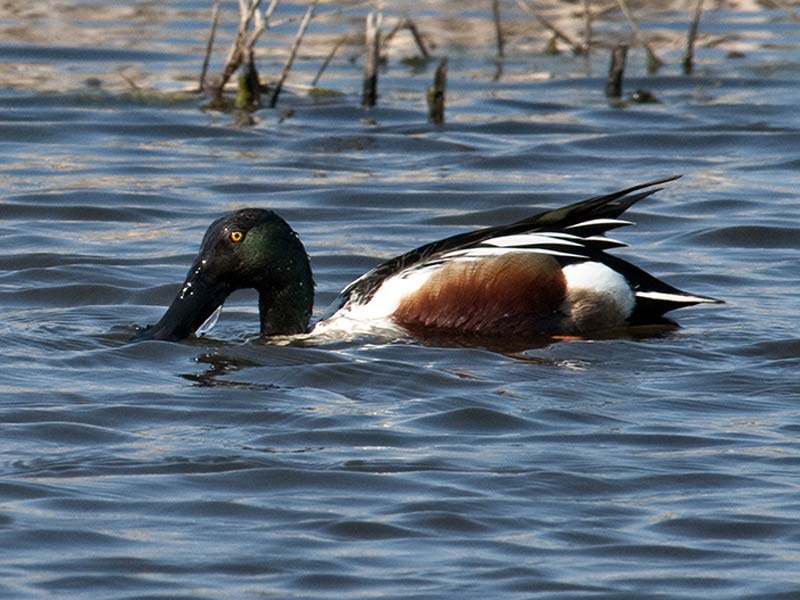 Description: This colorful duck is usually seen in small flocks on the lakes.  It uses its wide, serrated bill to sift food out of the water. It is not a diving duck.

If you see what looks like a mallard with a huge bill resembling a shovel, then you've found yourself a northern shoveler. This dabbling duck visits the lakes at the Garden in March, April, and early May, feeding and resting before flying farther north to breed. Shovelers can also be seen in late summer and fall at the Garden lakes on their way to their wintering grounds. An observant birder might even find a shoveler or two in winter where water remains open.

You can identify a male shoveler from a distance by its green head, large bill, and brown and white coloring on the sides. The female looks a lot like a female mallard, but the large bill is a great clue.

The shoveler takes water into its bill, then pumps it out through the sides with its tongue, filtering minute food particles with long, comblike hairs lining the bill's edge. Its diet consists of many aquatic plants as well as worms, nematodes, caddisflies, crustaceans, and other creatures living in shallow waters. An Illinois survey of foods eaten by the shovelers even includes young frogs, among at least 40 other organisms. Just think how murky the waters would be if the shoveler didn't help keep some of these critters in check!

Though most shovelers breed north of the Chicago region, a few remain here and even in central Illinois to build a nest with dry grasses and down in a shallow hollow on dry ground next to a marsh or slough.

In spring and fall, when you're walking around the waterways of the Garden, look for this handsome (some might say gaudy-looking) duck.

During the breeding season, the northern shoveler fiercely defends its feeding territory; but during migration this species is a lot friendlier to its kin. In fact, sometimes shovelers spin clockwise or counterclockwise in tight groups to create a whirlpool effect that brings food to the center of the flock.