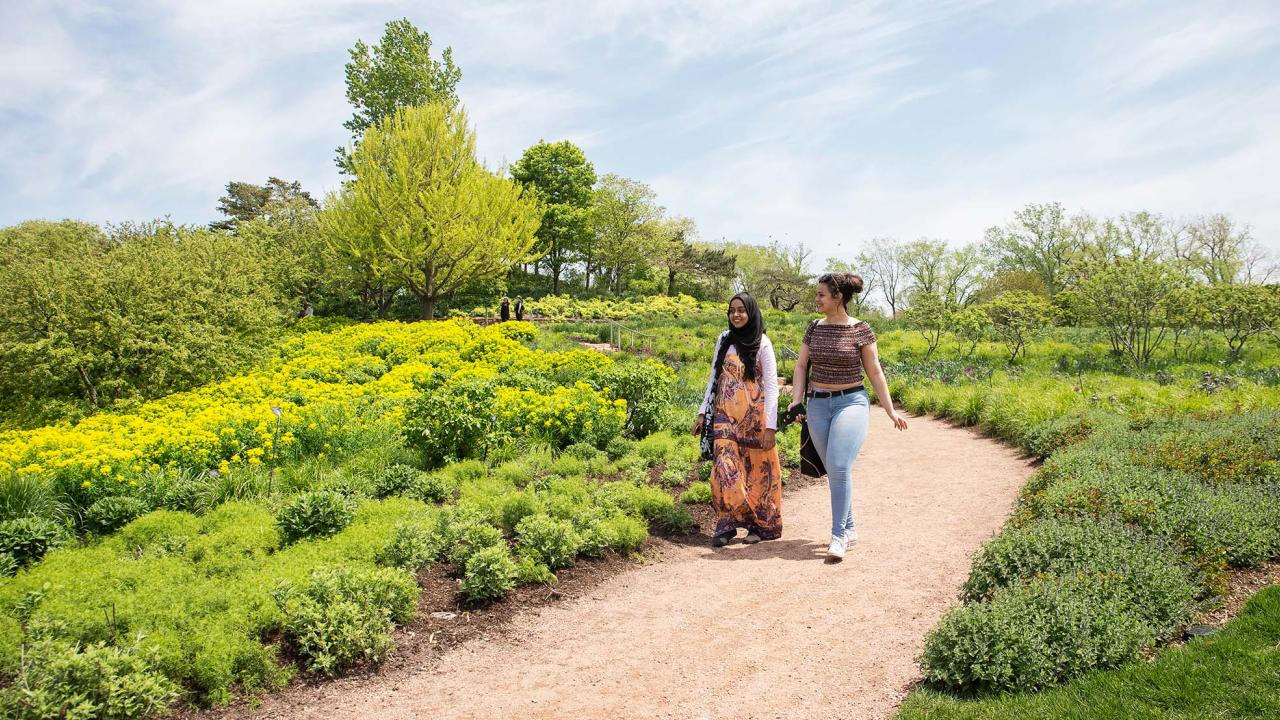 Inside the Blue Gate 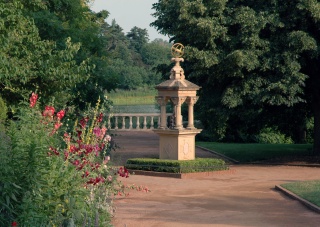 English gardens have history. That's what makes legendary landscape designer John Brookes's approach to the Helen and Richard Thomas English Walled Garden so interesting: by touring its six charming garden "rooms," visitors and gardeners learn about the differences among English garden styles and their historic roots.

At the garden's entrance, sculptor Simon Verity's garden folly—Guardian—represents the ancient elements of earth, air, fire, and water. The sculpture mixes classical elements (columns, an armillary) with semiprecious stones and minerals (limestone from Minnesota, jasper from Arizona, quartz from Arkansas, and copper from Portugal).

Mr. Verity's work is also in the private collections of the Prince of Wales and Sir Elton John. 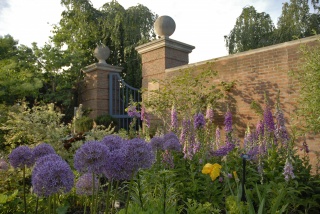 A walled garden is an ancient idea: the hanging gardens of Persia, the Imperial Garden of China, and castles in medieval England are great examples. The benefits are many: walls radiate heat for plants, block wind and cold, and keep out undesirable noise, views, animals, and neighbors. In England, walled gardens became popular in the 1800s.

Note that bricks on the outer wall here match those on buildings nearby; inside, the bricks have an older, more rugged appearance. 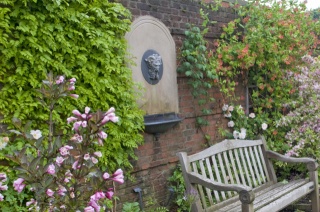 At the center of the Vista Garden is a sunken pool patterned after Christopher Lloyd's famous garden at Great Dixter in Sussex, England. Two 17th century lead satyrs (half-horse/goat, half-man), donated to the Garden by the Art Institute of Chicago, face each other across the pool.

Bubblers and fountains provide the soundtrack throughout this garden. Here the trickling fountains are calming—listen for other water sounds as you tour. 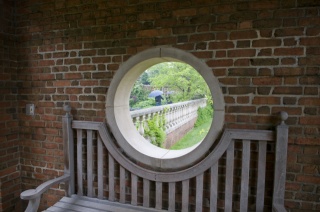 The pavilions are called pepper pots (they resemble English salt and pepper boxes). The pepper pot with a door is a tool shed for staff. Inside the open pepper pot, geometric windows frame views in different directions. The curved-cut bench is a popular photo spot. from both inside and outside the round window.

Between the pepper pots, low balustrades open onto a view of lawn, lakes, and distant trees, reminiscent of the famous landscapes that Capability Brown created in 18th century England. 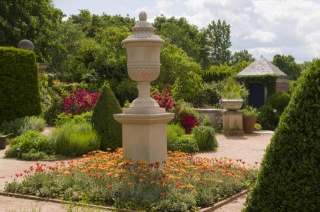 Clipped boxwood pyramids mark the corners of the beds, which are for daisies in all shapes and sizes, all members of the family Asteraceae. 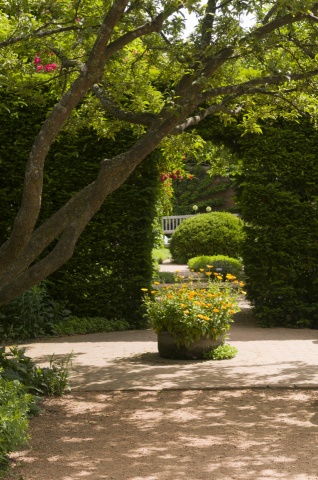 A window cut into the hedge is at once a wink at formality, a charming way to peek into the next garden, and a great frame for photos. As you step through the hedge's arched doorway toward the Checkerboard Garden, notice how you walk from sun to shade and back again into sunlight. 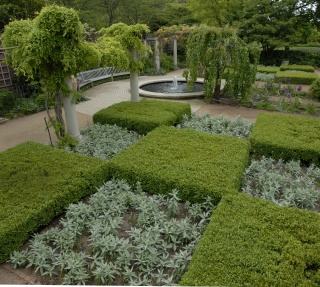 Take time to admire several different varieties of thyme planted in the walk leading to the checkerboard hedge.

The geometric regularity of a checkerboard garden is a style borrowed from the French, made popular in England in the early 20th century, when some gardens sported entire chess sets of topiaries. 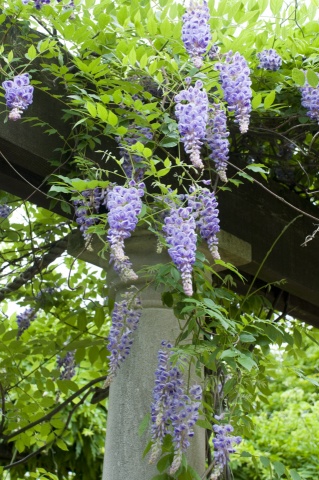 Have a seat at the Pergola Garden's curved bench for the view of the Roman-influenced columns. Notice the contrast between them and the rough timber crossbars and thick rope that top the pergolas; they're covered in clematis and wisteria in summer. In the circular pool, the water sounds refreshingly bubbly. Rounded cobblestones radiate from the pool for the walkway; random areas are cut out for plants. 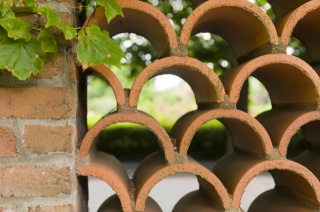 Above the north wall of the garden rise the tops of the linden trees in the Linden Allée. Terra cotta tiles set into the bricks in a basketweave pattern let you peek through, past the tree trunks, to the Krasberg Rose Garden beyond. 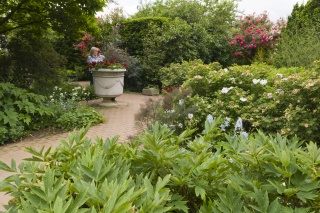 The cheerful jumble of flowers, herbs, fruits, and vegetables epitomizes a 19th century Cottage Garden. Overflowing with plants, it speaks to friendly intimacy, while using every square inch of gardening space. A cottage garden was a working garden, providing food, medicinal herbs, and aromatic flowers for the family who tended it.

Look for asparagus and peas in spring, fruit on trees and in containers in summer, and rose hips in the fall. 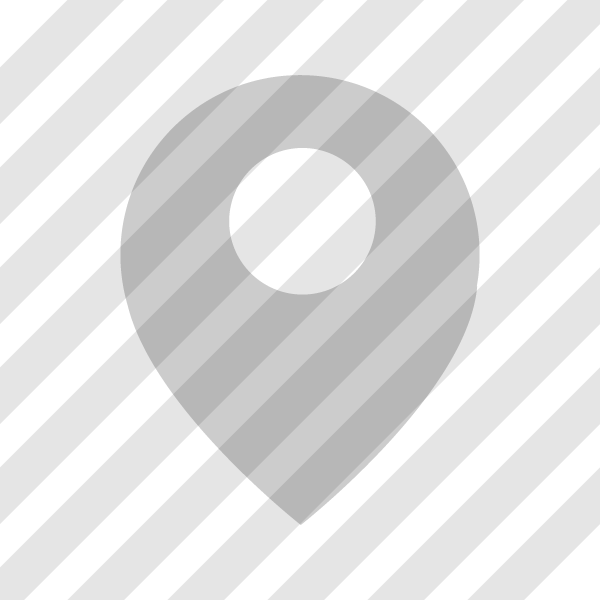 If the arbor isn't too heavily coated in climbing roses and other flowering vines (there are seven kinds used throughout the garden), you'll be able to see its utterly simple and practical construction: cedar posts with rope ties. 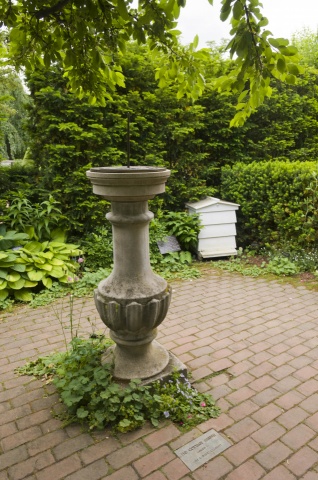 Yes, it's a working sundial. However, daylight savings time is a decidedly modern idea. Therefore, the sundial will be off by an hour every summer until standard time resumes.

A working beehive would be a necessity for a cottage garden, ensuring both pollinators for vegetables and flowers and fresh honey. This is a non-working beehive; to see real beehives in action, visit the Regenstein Fruit & Vegetable Garden. 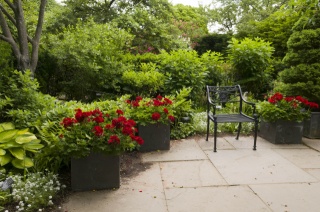 Said to be one of the most perfect of all gardens by Chicago Botanic Garden insiders, the Courtyard Garden is small and intimate in size, but with something of interest to admire every day of every season. A 'Golden Delicious' apple tree provides shade.

In this urban row house-style "yard," the 18th century lead cistern (from the Art Institute of Chicago) once graced the garden of an English estate, and the lead pot holding the corkscrew topiary is originally from England. 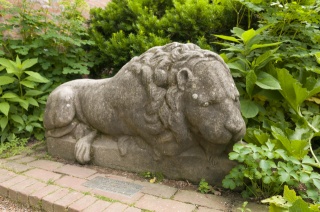 Give a nod to the sculpture Cuddly Lion, which was donated to the garden by its landscape designer, John Brookes. Mr. Brookes returns to the garden regularly to refine the plant materials and to tweak the color of the blue paint that trims gates and benches.

The English Wall Garden was dedicated in 1991, with HRH Princess Margaret in attendance.