In the classic, snow-filled landscape of deep winter, there are many images of great beauty — some of them overlooked by nature lovers and gardeners alike, simply because “it's just too cold to go outside.” Perhaps that's true when the windchill dips to threatening levels or the snow blows sideways; but when the air is clear and calm, and the sun gleams off the snow, it's time to take pleasure in the private world of plants in winter. What better place to seek out those winter-white showoffs than the Dwarf Conifer Garden? 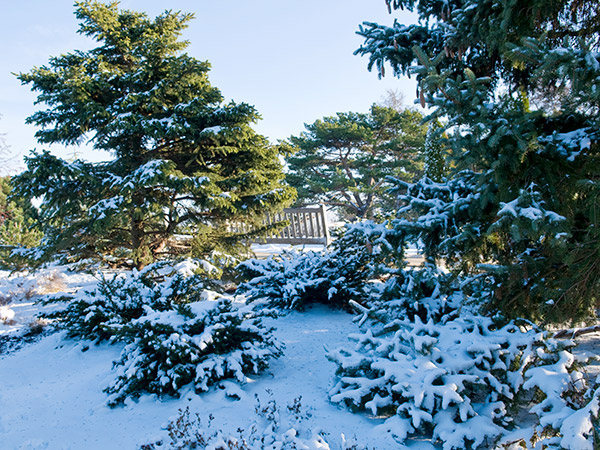 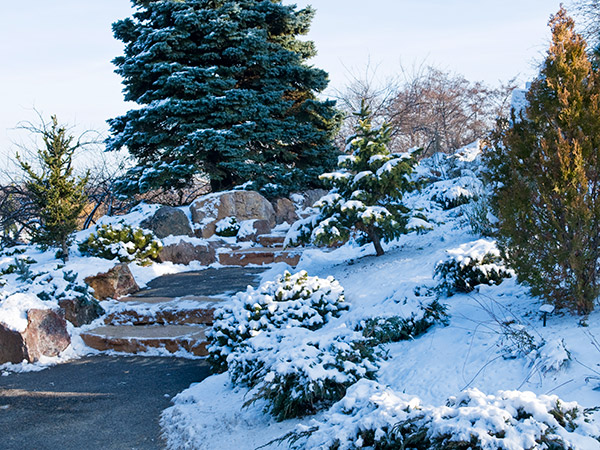 Against the snowy slopes, tall conifers loom large, with their sweeping, pendulous branch tips weighted down, sometimes to the ground, with puffs of snow. Their dwarf counterparts remain half-buried in mounds of white, some sporting snow caps or domes at rakish angles. Prostrate, ground-hugging conifers as well as the tall cascading evergreens make the most of the protective quality of snow, and create secret caves where birds and wildlife can weather the storms. What a delight to see how the garden's woody plants, ornamental grasses, and perennials all contribute to the fourth-season landscape! Proudly poking through snowdrifts that might have toppled other plants are the tawny stems and flowers of once-dark pink hydrangeas. Fuzzy, deep maroon sedums, darkened foliage of azaleas, and dried, caramel rose leaves peek through the snow, assuring us that spring beauty will return. Familiar yellow and red stems of dogwood puncture through the heavy white blanket, as do feather-light grasses that cast almost imperceptible shadows on the snow.

How glad we feel for the subtlety of this season, where small favors are so enjoyed. The threadlike wisps of Russian sage — how can they possibly stand so straight in this winter of heavy snow? Tips of some green, swordlike foliage slice through the white, urging us to return in summer and confirm the identity of this unknown plant.

The splendid views from the Dwarf Conifer Garden to the Malott Japanese Garden encompass a broad expanse of white land and white water, with no indication of where one form ends and the other begins. Framing it all, on the distant horizon, are the massive trees of McDonald Woods, brown, leafless, and silent when viewed from afar, with the three islands of Sansho-En appearing as soft meringue pillows floating in cream. Designed as a strolling garden with curving paths, the Malott Japanese Garden is considered by many to be most beautiful in winter. Its inherent design, with an emphasis on nature's forms — clouds, stones, hills — revisits this theme when plants are covered with snow. Tightly pruned magnolias, azaleas, forsythia, quince, as well as smooth lumps of yews and junipers, now resemble white boulders or fluffy clouds. Open-pruned pines, wired to maximize long and borrowed views, are natural snow catchers, offering up their own cushions of snow.

In Japan, families time their garden outings to catch the cherry blossoms at their finest, the fire of maples in fall, the peak of chrysanthemum blooms, or the delicacy of azalea displays. They also plan winter walks in snow specifically for snow viewing and shadow watching — a happening where trees and shrubs create a second shadow landscape on the snowy ground. Stripped of their leaves, the garden's classic maples reveal their inner beauty. The fernleaf maple, Acer japonicum 'Aconitifolium', boasts a smooth gray trunk with coralish red side branches. The peeling, burnished bronze bark of paperbark maple, Acer griseum, is a jewel in the sun. The deep furrows of the large sugar maple, Acer saccharum, are echoed in the strong trunk of the neighboring weeping maple, Acer saccharinum 'Beebe's Cutleaf Weeping'. For those with an eye to detail, look at the small, bluish white and yellow lichen patches pasted on the tree trunks (also visible in the growing season on rocks and boulders). Contrary to popular belief, they are not parasites leaching off the maple. They are quite unique organisms composed of fungi and algae living on the bark. 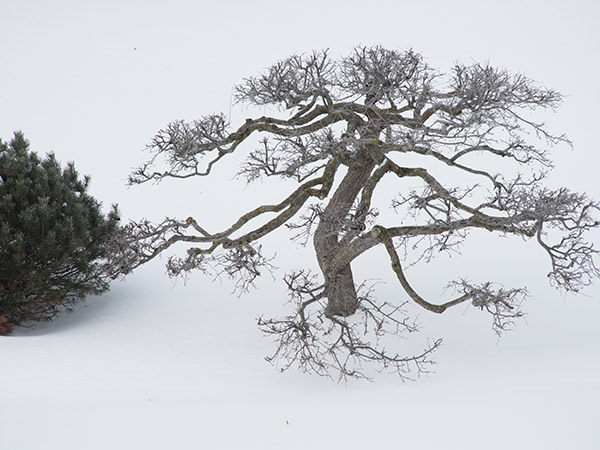 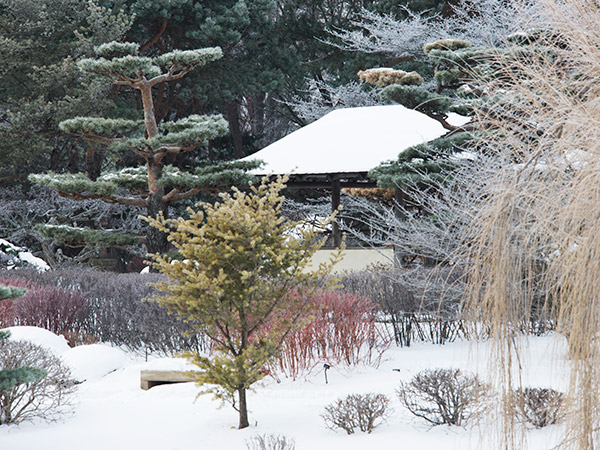 Walking in a white winter land muffles certain sounds while intensifying others. Senses are heightened. Visitors will hear a variety of winter birds calling as they flit and forage for seeds. Listen for the chickadees, juncos, goldfinches, woodpeckers, and nuthatches drawn to the garden for food and refuge. Hawks and owls can be seen circling high or gliding low as they seek their prey. Early afternoon lengthens the shadow play, stretching the snaking figures across the snow, moving them down the hill to the snow-covered valley where, perhaps feet below this snowy surface, land and water meet.