What is a weed? Essentially, it’s a plant that’s growing where you don’t want it to be. Weeds are opportunistic, springing up where there’s a void in the landscape, where the soil has been disturbed, or where birds and mammals have eliminated the seeds of the fruits they’ve eaten.

Weed ruthlessly in spring and early summer, rather than waiting for weeds to grow—they’ll be easier to remove, less likely to have spread, and won’t use up the precious nutrients and water from the soil that you want your other garden plants to have. Cultivate a love of weeding—smart gardeners know it’s worth it. 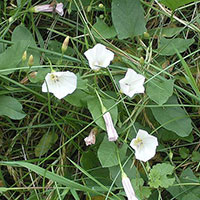 Every gardener knows the horror of bindweed: the perennial, twisting, vine-like weed that climbs up the stems of other plants, defying attempts to unwind or pull its counterclockwise cling. If neglected, bindweed forms a thick mat and an extensive root system that overwhelms any garden bed—or even farm field.

Get familiar with bindweed’s arrow-shaped leaf and search for the first tendrils at ground level while weeding. If the weed is already established, pull and clip the plant repeatedly to exhaust its roots. Our plant healthcare manager recommends this trick if you’ve spotted an established vine: set up wooden stakes for it to cling to (rather than other plants); then remove the plant stake. 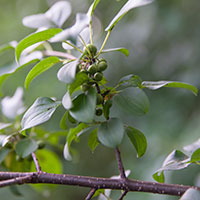 North Shore residents know buckthorn well. It is the shrubby tree that pops up in a hedge or wooded area, then chokes out every other plant, cutting off sunlight as it spreads. As its name warns, buckthorn has thorns, adding injury to insult for those who forget to wear gloves and goggles while removing it.

Like all weeds, buckthorn is best removed when small. Dig the plant up entirely. Not sure if that sapling is a buckthorn? Identify it in fall, as its leaves stay green on the branches much longer than most other trees’ branches. 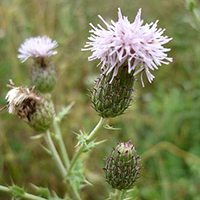 Canada thistle looks like a weed, with tufty seedheads and spiny, pointed leaves that stick out like a sore thumb (wear gloves while pulling it) in your garden bed.

One reason that Canada thistle is so common: its root system spreads by runners, allowing it to produce many new plants and return year after year. To eradicate it, pull all running roots. 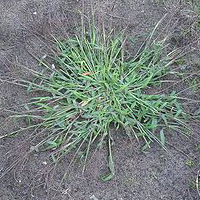 Some weeds are indicators of soil health and condition; crabgrass indicates compacted soil, which is one reason you’ll find it in lawns and at the edges of sidewalks.

Unlike lawn grass, crabgrass grows in a rosette of leaves, spreading by both seeds and creeping stems. Its seedheads name it, as they resemble crab claws.

Because crabgrass is an annual, the efficient way to prevent it from spreading is to prevent it from flowering. Cut the rosette off with a knife so it won’t self-sow. (Mowing doesn’t work, as the low-growing plant is below blade height.) 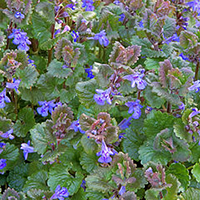 The name says it all: insidiously creeping stems allow this weed to spread like a ground cover. A perennial, creeping Charlie can thread its way through, above, below, and around other plants, making it difficult to remove.

Identify it by its scalloped leaves and those square, creeping stems. To remove: trace it back to its root nodes, then dig those up repeatedly throughout the season. 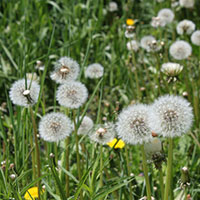 It’s the poster child of weeds, yet dandelion has undeniable value, too. Its young leaves are vitamin-rich edible greens, and its bright yellow flowers are one of the earliest and best sources of nectar for emerging insects, especially bees. And who among us hasn’t delighted in picking a posy of dandelions or blowing clouds of fluffy seedheads?

But it’s the dandelion’s taproot that’s the real issue for gardeners. To remove it, wait until after a rain, then dig the taproot out completely, or that same dandelion will return next year. An old-fashioned dandelion fork is a great tool for the job.

And if you don’t quite get all the roots this year, let the survivors bloom for the bees next year before you tackle that taproot again. 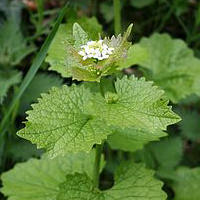 Garlic mustard is invasive that just one plant can spread by seed quickly, forming colonies that choke out native plants in woodlands and shady gardens.

Garlic mustard is a biennial that grows into a clumping rosette of toothy leaves in its first year, then flowers and sets seeds in its second year. The key is to pull it in its first year—a task that our ecologists and volunteers repeat each spring in the McDonald Woods. As its name declares, the plant smells strongly of garlic when crushed. 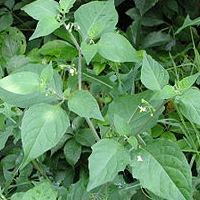 Nightshade can be crafty in a garden bed, vining and climbing and camouflaging its wavy-edged leaves through other plants. Most gardeners don’t notice it until it has already flowered and set its distinctive clusters of mostly black berries, which are both numerous and potentially poisonous.

Nightshade grows where the ground has been disturbed; keep your garden beds healthy and uncompacted to prevent this weed. Pull or dig it out completely at the root. 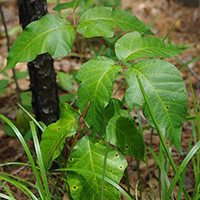 Even children learn the phrase “Leaves of three, let them be,” the apt descriptor of poison ivy.

The perennial plant can be a trickster, growing low and shrubby or high and vining. But it’s the allergic reaction that some humans have that’s the real risk—touching the shiny leaves or burning the plant can release the chemicals that cause rash and uncomfortable itching.

Always wear rubber gloves to pull or dig the plant, and dispose of immediately. 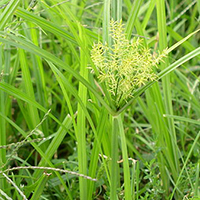 Indicative of wet conditions, and often found in lawns, yellow nutsedge can look like regular lawn grass until it grows taller, powering up to a potential 8- to 36-inch height. Check the leaves for identification—they feel stiffer than lawn grass, and the stem is triangular (it’s a sedge, not a grass).

Pull this weed as soon as you spot it—if left unchecked, it develops underground tubers and nutlets that make it difficult to control later. Feathery, golden flowers can produce seeds too.

Weeds don't just happen at random. Different conditions favor plants that evolved in different habitats. So the particular plants that pop up where you don't want them might tell you something you didn't know about your garden.

Compacted soil: If you see mats of prostrate knotweed, spotted spurge, or plantain, take a shovel and check whether your soil is so packed down that grass roots can't penetrate and air and water can't reach them. Weeds that tolerate compacted soil often occur in lawns that see lots of traffic, such as back yards with kids, parks and playing fields or along paths. Having the lawn core-aerated frequently to open it up to air and water should help.

Low fertility: Clover tends to turn up in lawns that aren't getting enough nitrogen to support healthy grass. In fact, that might be just Mother Nature trying to provide some fertility. That's because clover is a legume that can actually collect nitrogen from the air and deliver it to the soil where other plants such as grass can use it. For that reason, clover seed used to be included in grass seed mixes and clover was considered a normal and desirable part of a lawn.

High fertility: Places that have plenty of nutrients, especially nitrogen, invite different weeds. Purslane, for example, often turns up in the rich soil of perennial beds. Other indicators that the soil has ample nutrients include lambs' quarters and chickweed. So don't assume that more fertilizer is always better for a lawn or garden.

Wet soil and drainage problems: If you have a spot where any of these plants appear often, check it out after a rain to see if the soil is saturated. Consider installing a rain garden to make the most of a low, wet spot, or at least choose plants that like their feet wet. Maybe that low place in the lawn is a good site for a river birch. Weeds that can indicate poorly draining soil, such as clay, include common chickweed and crabgrass.

Dry soil: Many weeds do better in dry soil than turf grasses or most garden plants, which is why they often sprout in droughts. But black medick and red sorrel are particular indicators.

Shade: If you've got a lot of ground ivy (a.k.a. creeping Charlie) in the lawn, it's a sign that you really don't have enough sun for grass, especially Kentucky bluegrass, to be at its best. Violets, too, congregate in shade, especially in moist soil; they are native to American woodlands and might be welcome in the shade garden. Consider replacing grass in deep shade under trees with areas of mulch or shade-tolerant ground covers or perennials.

Issues with pH: Red sorrel and prostrate knotweed thrive in acid soil, but that is not widespread in the Chicago area. We're more likely to see lambs' quarters, which prefers the high pH of alkaline soils. It's a good reminder to get a soil test that will tell you what you're really dealing with.

Click below to view a larger image of these plants you might find in your midwestern yard. 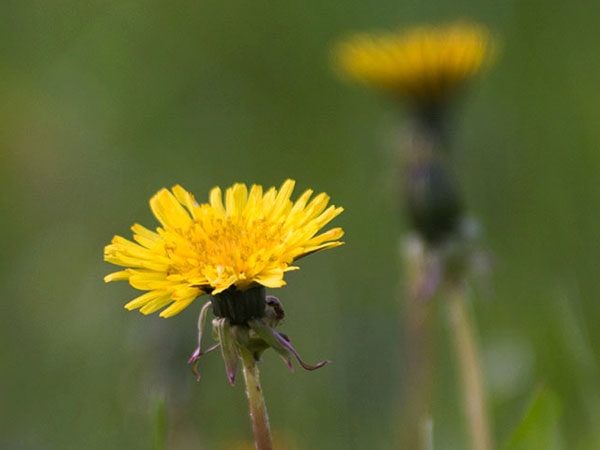 Eliminating Weeds in Your Lawn

Tips on how to deal with weeds: 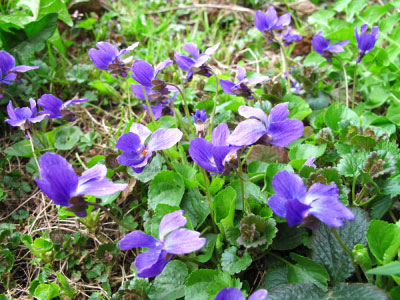 In the Victorian-era language of flowers, a bunch of violets meant faithfulness.

In the language of lawns, it means wet soil and shade.