Not the bad guys

Unfortunately, thistles have been given a bad reputation, mostly because of the preponderance of exotic thistles that generally thrive in abundance on the disturbance we create in the landscape. Two of the most widely known and encountered thistles are the Canada thistle (Cirsium arvense) and the bull thistle (Cirsium vulgare). The Canada thistle is a perennial plant commonly found in disturbed ground, like farm fields, roadsides, and gardens. It is a rhizomatous plant that spreads both by rhizomes and seed. It generally produces single, narrow prickly stems that expand underground to form colonies. The aggressive root systems of these plants can go down 6 to 7 feet into the soil and travel for many yards underground before surfacing in another spot. These extensive root systems make control very difficult. The small pink flowers eventually form clouds of silver-gray seed heads that release their seed to blow on the wind and start new colonies everywhere they land. Although they are most commonly found in disturbed soil, they can easily invade natural areas and are just one of the invaders that land managers need to tackle. 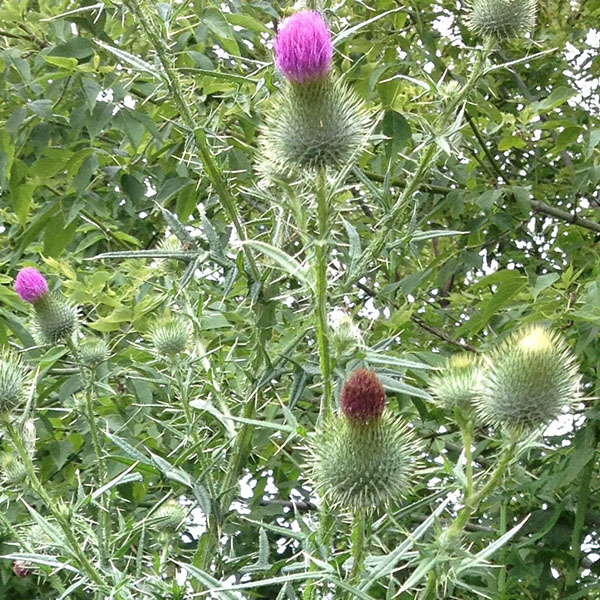 Bull thistle is a much larger plant. This biennial plant has thick, spiny stems that can often branch and reach heights of 6 to 8 feet or more. You will often see large, spiny basal rosettes of leaves on the first-year plants that will send up their large stalks and flowers the following year. Although these exotics are also fond of disturbed ground, they do not form the large colonies like Canada thistle, nor do they have extensive, traveling root systems. The spines on these plants are formidable. Anyone trying to remove the mature plants will need to wear heavy leather gloves to avoid being impaled by the spines. As you might imagine, the spines provide effective protection for the plants against herbivores. They tend to increase in pasture land, due to the fact that the grazing animals refuse to touch them.

Much less well-known to the average person is that there are a number of native thistle, many of which are quite rare today. One of the native thistles found at the Chicago Botanic Garden is the tall thistle (Cirsium altissimum). In outward appearance, you might confuse it for the exotic bull thistle. It is equally large with similar large pink flowers. However, unlike the bull thistle, the tall thistle has leaves that have very few indentations and have downy soft stems and leaves with an occasional stouter spine here and there. The underside of the leaves are also snowy white. The tall thistle derives its name from the fact that it does attain substantial stature in its woodland habitat. This thistle is an important plant for many species of bees, beetles, and moths. In addition to a variety of butterflies that nectar on the flowers, there are two butterflies known to utilize the plant as a food source for their caterpillars—the painted lady butterfly and the swamp metalmark. These plants are uncommon in our landscape today. It is a shame that more people can’t experience the sight of tiger swallowtails, monarch butterflies, goldfinches, and indigo buntings alighting on the swaying flower heads within the dappled shade of oak woodlands. 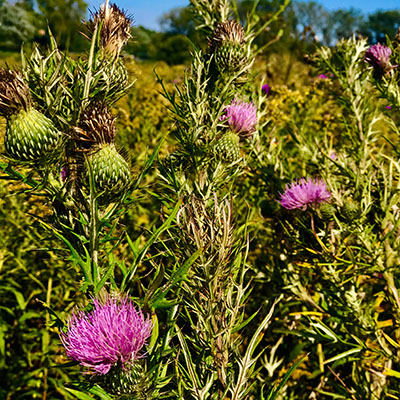 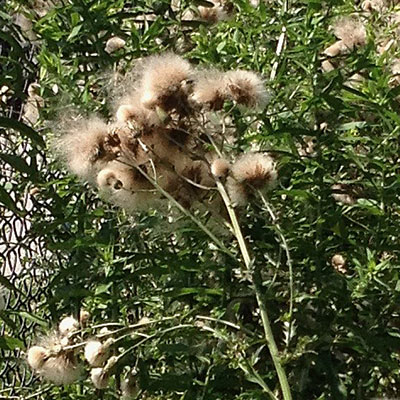 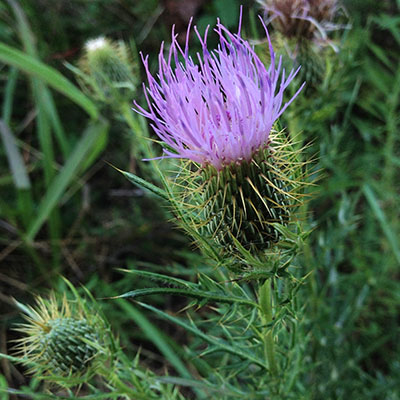 A second native thistle seen at the Chicago Botanic Garden is the pasture thistle (Cirsium discolor). This is another biennial plant. It is a species that is characteristic of prairie landscapes, where it can be found in high-quality prairies. Since it is a large species with stout spines and heavily dissected leaves, it can be confused with the bull thistle. One of the distinctive features that helps to identify this plant is the snow-white undersides of the leaves. Although this is a plant of native habitats, it sometimes can be quite aggressive in disturbed areas, like over-grazed pastures. Since this plant has stout spines, the grazing animals tend to leave it alone. Like the tall thistle, this plant is important for a wide range of pollinators. It is also visited by the thistle long-horned bee (Melissodes deponsa) that is a Cirsium species specialist pollinator.

There are a number of other native thistles in the state. Unfortunately, most are very rare now and are confined to specialist habitats. These include the Hill’s thistle (Cirsium hillii), a plant of gravel hill prairies and pitcher’s or dunes thistle (Cirsium pitcheri) a plant of sand habitats, particularly the sandy beaches along Lake Michigan. Both of these plants are subjects of research being conducted by the Negaunee Institute for Plant Conservation Science and Action at the Chicago Botanic Garden.

One of the serious threats to these rare thistles, and native thistle in general, is the use of biological control insects. Several species of weevils were introduced into North America years ago to try to help control exotic thistles. Unfortunately, several of these beetles have switched to feeding on the seeds of native thistles and the impact of this is being investigated.

To get a good look at some of our native thistles, travel to the Barbara Brown Nature Reserve at the south end of the Garden. Walking along the path in the reserve, you will be able to see both pasture thistle along the prairie berm and tall thistle, both on the berm and in the wooded area of the reserve.

Admittedly, invasive, exotic thistles can be a real pain, literally. Try to overcome the stigma associated with thistles and become aware that there are important native thistles that belong in our natural areas and that they contribute to the overall health of the environment.