Reflections on the Island Beyond Your Reach

If you’ve visited Lightscape, you probably noticed some striking transformations at the Chicago Botanic Garden. Following the illuminated trail, perhaps you stood to admire the distant and beautiful Elizabeth Hubert Malott Japanese Garden. You likely saw a lit-up island floating in the lake, and if you looked closely, you might have noticed that there’s actually no way to get to that island.

Did you wonder why that is?

Horaijima, or the Island of Everlasting Happiness, represents paradise—a place inaccessible to mortals, designed to be viewed and contemplated from a distance.

Ayse Pogue is a senior horticulturist at the Garden, and she oversees the Malott Japanese Garden, including the Island of Everlasting Happiness. For Lightscape, Pogue worked with the designers to ensure the lights on the island honored traditional Japanese garden principles. She provided circular patterns that resemble ripples of water, a symbol found in traditional Japanese dry gardens. The result is an ethereal effect that maintains the look and feel of a serene floating island and inspires a moment of contemplation and stillness.

As you look onto the island during the day, you can see pruned Scots pines, cherry shrubs, Jack pine, magnolias, and weeping crabapple trees. Pogue says the Scots pines are a perfect choice because they look so much like Japanese red pines with their form and resembling trunks. Japanese pines would not work with our midwestern alkaline soil, but she explains that any plant, even one not native to Japan, can be used in a Japanese garden as long as it is maintained according to Japanese gardening principles. According to Pogue, it is just as important to ensure that the garden fits the surrounding environment, as if it has been there forever.

One of Pogue’s favorite spots to view the island is from the Zigzag Bridge that links the islands of Keiunto (Island of the Auspicious Cloud) and Seifuto (Island of Clear, Pure Breezes). For the full effect, she recommends catching it on a foggy day—especially in the fall.

But this unreachable island has a deeper story and meaning—namely, a quest for immortality.

Through the ages, people have tried to discover the secret to everlasting life—from Ponce de León searching for the legendary Fountain of Youth to early philosophers contemplating the notion of an afterlife. This dilemma is aptly represented by the style of Sansho-En, which spans three islands, including the elusive Horaijima, the Island of Everlasting Happiness.

This island has deep roots, including in Chinese mythology. According to The Chinese Garden: Art, History, and Architecture by Maggie Keswick, many painters, scholars, poets, and philosophers associated it as the home of Immortals, enchanted beings who could dissolve in the air and fly on the backs of storks. It was believed that in reaching those peaks, humans seeking immortality would uncover the elixir of life. Chinese Emperor Han Wudi (141-86 B.C.E.) built luxurious replicas of the Immortals’ homes on islands near his palace to get the mystical beings to come near so he could persuade them to give up the secrets of longevity.

Legends of magical island dwellings of immortal beings spread across the east, finding their way to Japan. According to Japanese Gardens: Islands of Serenity by Kanto Shigemori, during the time of Empress Suiko from Japan (602 A.D.), a Korean priest visited her court and brought back written works on magic, astrology, geography, and legends of the immortal beings and their three island abodes: hojo, horai, and eishu in an imaginary sea.

In Japanese Gardens by Irmtraud Schaarschmidt-Richter, the author points to the Sakuteiki of the eleventh century, the earliest Japanese treatise on gardens, which explains that it was believed that these islands were originally a single mountainous island that was split into smaller islands, one of which is the unapproachable horai island. In these legends, Immortals’ homes were carried on the heads of turtles whose long life-spans symbolize longevity.

Japanese gardens continue to evolve in style and form, but remain driven by core principles. Plants are groomed to appear ideal or almost perfect. The representation of the islands and use of tranquil waters are also important staples.

According to Chicago and its Botanic Garden: The Chicago Horticultural Society at 125 by Cathy Jean Maloney, Americans have been fascinated by Japanese garden styles ever since their boom in popularity during the 1876 Centennial Exhibition in Philadelphia and the subsequent Chicago World’s Fair of 1893. The Garden is no exception and in 1975, UCLA Professor Koichi Kawana, Ph.D., designed the Japanese Garden, Sansho-En, known today as the Elizabeth Hubert Malott Japanese Garden

Pogue often reflects on the mythical legends behind the concept of the unreachable island she manages today. “These immortals who live out there are happy, they have every amenity they want—they’re in good spirits. We humans are more inclined to worry about things and be scared of things. We’re naturally inclined that way, so we need to work against that. That’s how I see this island. We’ll never reach that state where we’re always happy, joyful, or grateful, but we need to strive toward that.”

There’s still time to catch the island at its most luminous during Lightscape. 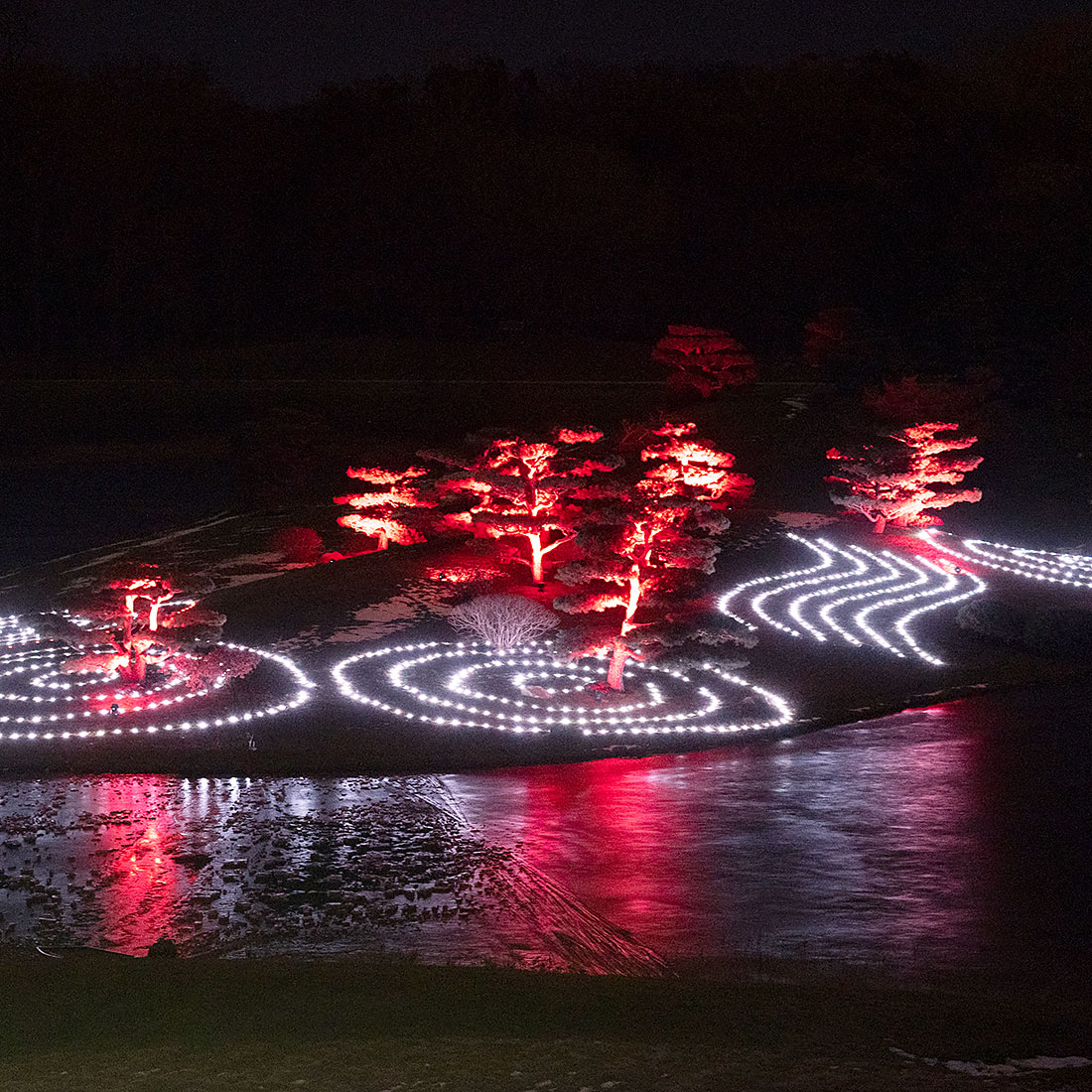 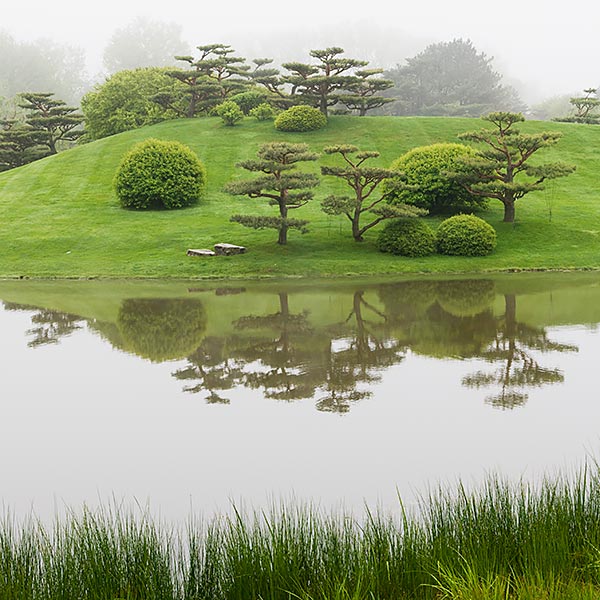 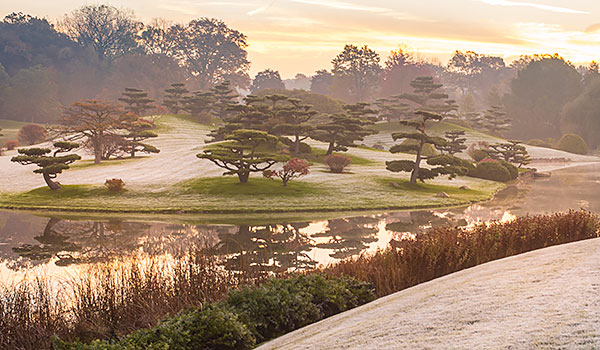