On the virtually treeless plains of Nebraska almost 150 years, ago a day was set aside to celebrate and appreciate trees—Arbor Day.

This year we have selected the genus Quercus, the oaks, as an exemplar of why trees are important to us and our environment. 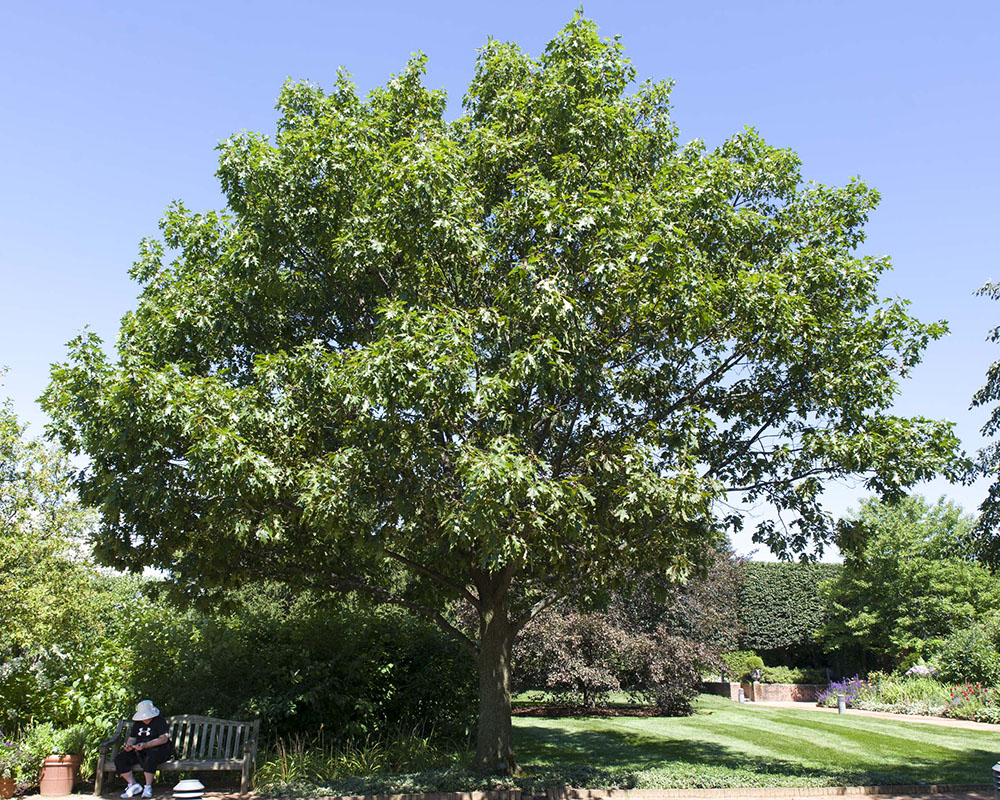 There are 461 species of oaks, according to the authoritative Plants of the World Online hosted by the Royal Botanic Gardens, Kew. Centers of diversity are located in Mexico, China, and the Mediterranean nations. DNA research found that the European oaks are all descended from a very old ancestor that migrated from North America to Europe. The oaks of China have diverged over very long time periods into several related genera.

Quercus is the largest tree genus in the flora of North America (north of Mexico) with more than 90 species recorded. They range in size from knee-high multi-suckering evergreen shrubs to the majestic live oaks of the South, the white and red oaks of the eastern temperate deciduous forests, the bur oak of the eastern prairies, and the iconic oaks of California and the Pacific Northwest.

Oaks can reach very old age. Trees in Europe have documented ages of well over 1,000 years; a southern live oak in South Carolina has reached 1,500 years in age and the clonally propagated, suckering oaks of the desert southwest are estimated to be well over 1,000 years old. They have been part of human culture for millennia wherever they are found. 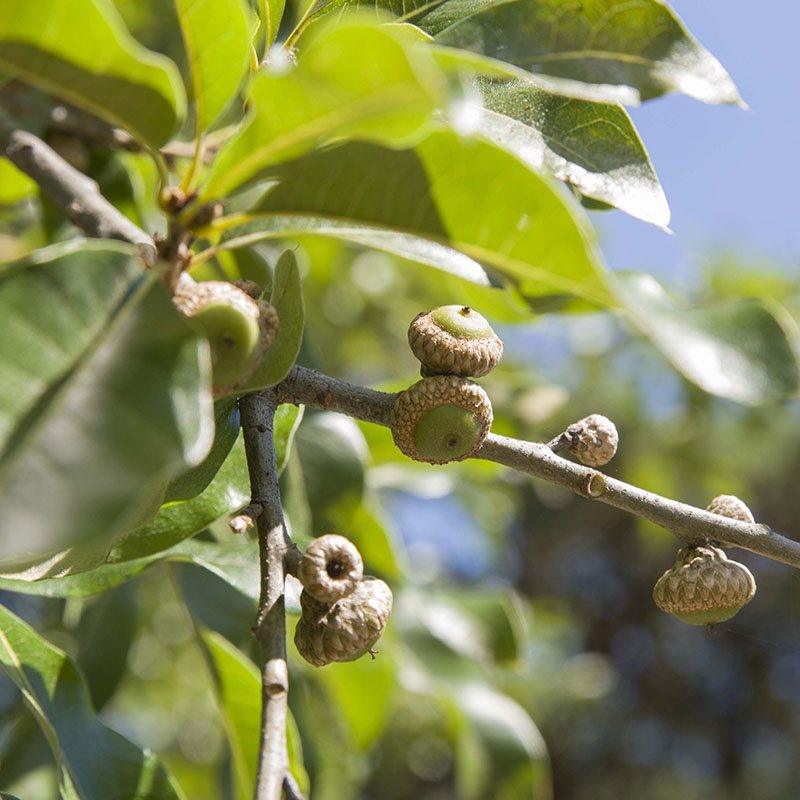 Young acorns on a Quercus imbricaria 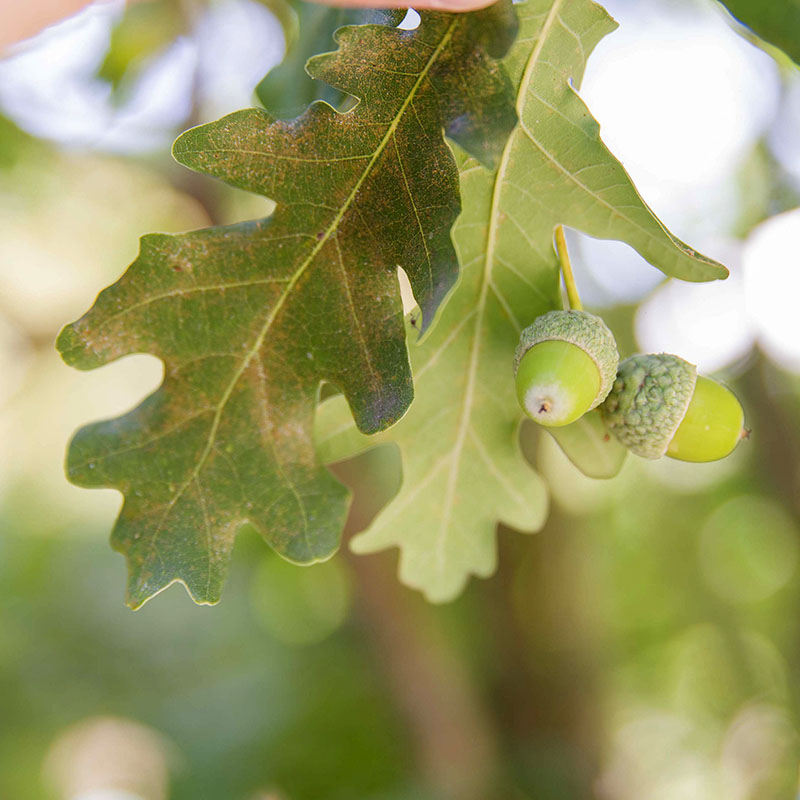 Acorns have been sources of food during starvation years for civilizations in the Middle East, Europe, Asia, and North America. Some species are noted for having lower levels of tannins in the acorns (Quercus kelloggii in California) and have been part of the diet of native peoples of the Pacific Northwest and Japan. The acorns, when dried, can be stored for years, ensuring nutrition even in famine years. Typically, the acorns are ground, soaked in water (ideally running water) for several days to remove the tannins and then baked into a bread like food.

In addition to their direct human food value, the fruit are famously used to fatten the pigs of Iberia creating jamón de Iberica ballota (ham from Iberica hogs fed on acorns) and packed with antioxidants—and also the most expensive ham in the world. Oak root systems support the growth of chanterelles, oyster, and truffle mushrooms. During the Civil War, roasted acorns were used as a coffee substitute; ditto in Germany during WWII.

Oak has been a favored material for buildings, furniture, and tools throughout history. Medieval and renaissance European monarchs, concerned that the supply of timber for their fleets would disappear, planted swaths of their kingdoms in oaks. Royal forests in France now feature trees that are more than 300 years old.

Oaks have fed us, sheltered us, clothed us, and provided spiritual and emotional support. Oaks are featured in the sacred groves of pre-Christian Europe, and in the Caucasus, a 300-year-old oak hosts a Georgian Orthodox chapel in its hollowed trunk. Carved oak decorations are featured in some Christian churches.

Not to be outdone, deer, squirrels, turkey, peccary, and many more of our native fauna also feast upon acorns. Among them are blue jays with specialist hooks on their beaks used to open the seeds.

Dried leaves and bark from oaks still cure many of the hides used for clothing, footwear, and horse saddles, bridles, and other tack. When left on the ground, they decompose slowly, providing a reliable, long-term food supply for a host of soil-living animals, bacteria, and fungi. 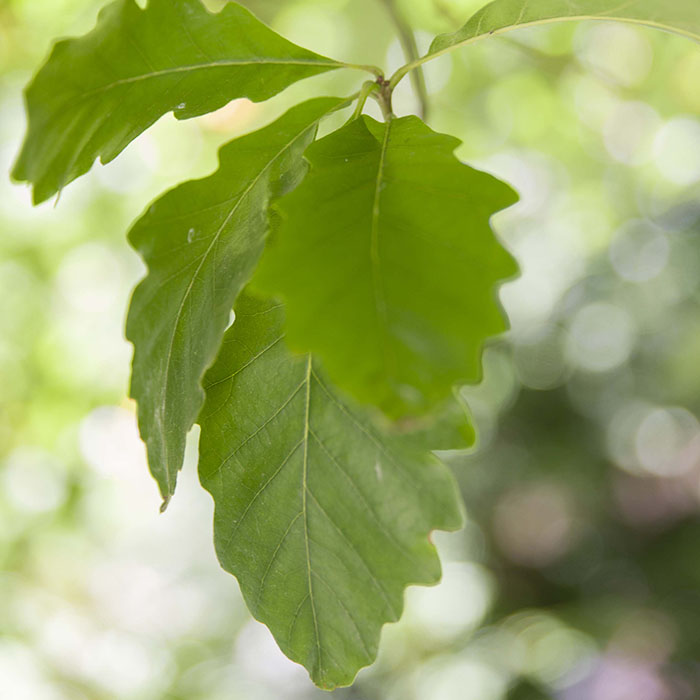 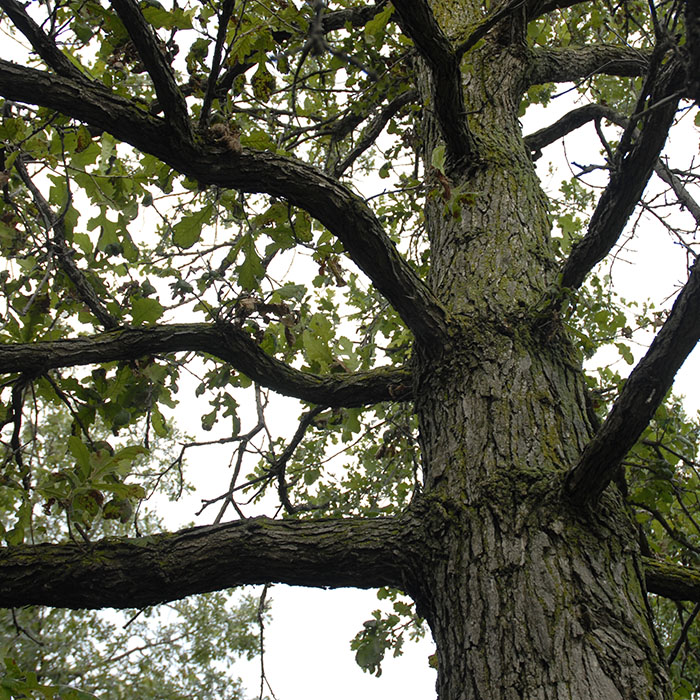 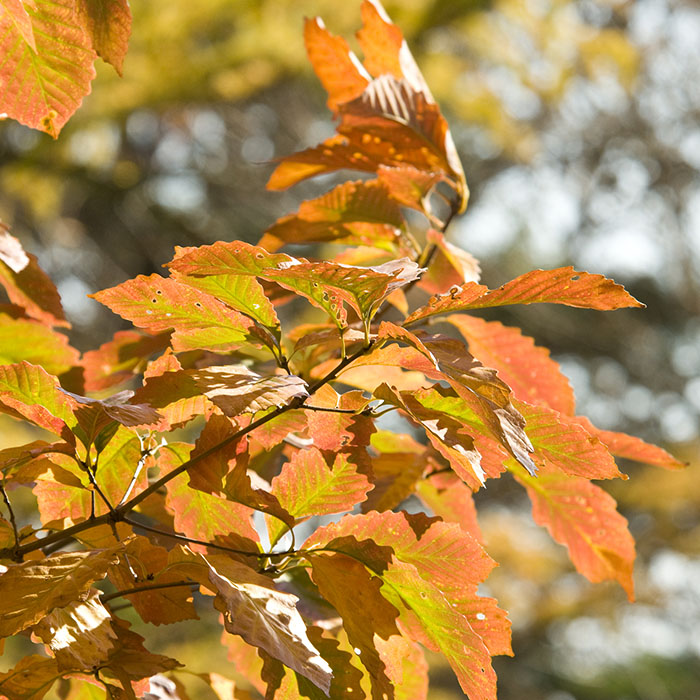 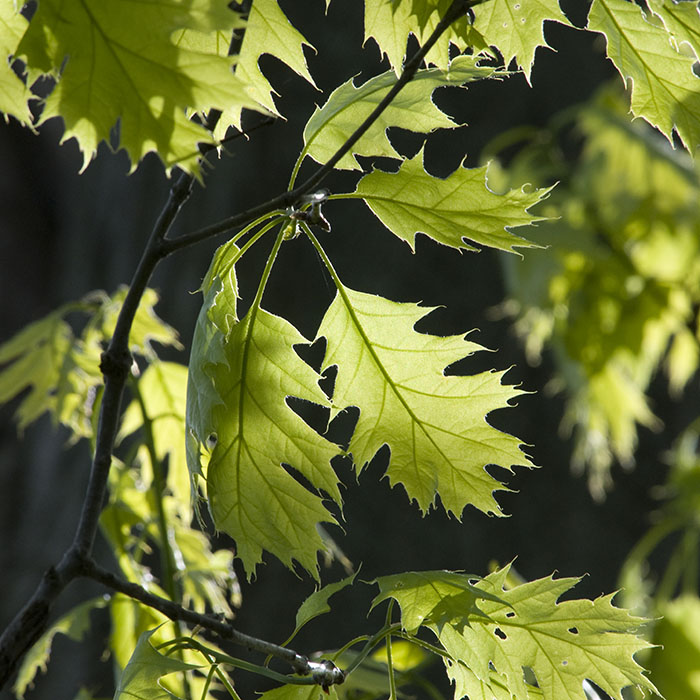 Oaks support more biodiversity than any other genus of tree in North America. One study found 897 species of caterpillars (insect larvae) fed on their leaves. The iconic galls on oak leaves are the result of specialist insects that lay their eggs inside the leaf tissue; their eggs secrete hormones that redirect the growing leaves to build a cocoon of woody tissue around their developing larva. Add in all of the animals drawn to oaks to feed on the insects and the web of life becomes very expansive.

Oaks—with their potential for long life spans—can be planted and nurtured to harvest and store large amounts of carbon, effectively sequestering it until their tissues decompose hundreds of years from now.

The Garden is a member of the North American Plant Collections Consortium of the American Public Gardens Association multiple site collection of Quercus in North America. Twenty botanic gardens, public gardens, and arboreta have committed to collecting and conserving the Quercus that can live outdoors in their climate.