What an amazing plant science moment occurred in the Semitropical Greenhouse this morning, as a fascinated crowd gathered to see what was happening with Spike, the titan arum.

On Saturday, it was determined that Spike had run out of the energy it needed to continue its bloom cycle. Spike is powered by energy from the sun, stored in its beach-ball-sized corm—a tuber-like underground structure. A tremendous amount of energy goes into producing the single, giant flower structure that a titan can send up in its first decade or so of life (Spike is about 12 years old).

OVERHEARD: “I WISH MY BIOLOGY TEACHER WAS HERE.”

As this week’s expected bloom time passed, our science and horticultural staff went into action. Spike wasn’t dying—but the flower structure had stopped maturing, and the spathe did not open. On Friday, Dr. Shannon Still, conservation scientist, and Tim Pollak, the floriculturist who had raised Spike from a seed, peeked inside the frilly spathe to check for pollen.

“If there had been pollen, it would have been all over my hand,” Still said. Pollen’s absence meant that the male and female flowers might not be fully developed. The possibility remained that pollen might still develop, even though the spathe would not open—and THAT led to the decision to remove the “frozen” spathe to see what was happening with the real flowers inside.

OVERHEARD: “WE WERE WATCHING IT EVERY DAY. EVERY 20 MINUTES OR SO.”

As Still began cutting just above the peduncle (stalk), the crowd grew quiet. Dr. Pat Herendeen, senior director, Systematics and Evolutionary Biology, narrated for the crowd. As the spathe started to come away from the towering spadix, the internal color started to be visible. 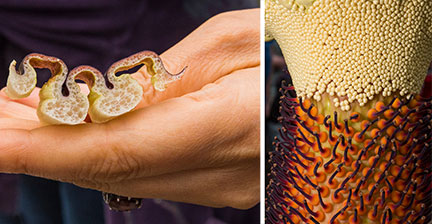 Left: A cross-section of the spathe reveals the cell structure inside. Right: A close-up of the hundreds of male (top) and female (bottom) flowers inside Spike’s spathe.

“The spathe feels a bit like cabbage leaves, with a rubbery texture,” Herendeen said. “The color inside varies from one plant to another in nature. It is dark maroon, the color of rotting meat, which is meant to attract the flies and beetles that are the plant’s natural pollinators.”

Pollak held the spathe steady as Still continued to free it from the stalk. With one last cut, it came free—and the crowd gasped as the inside of the spathe was unfurled and the true flowers at the base of the spadix were revealed—pale rows of bumpy-looking male flowers atop a strip of orange and brown female flowers.

Herendeen answered as questions flew: The male flowers do not appear to have produced pollen yet. Spike’s fabled scent is only detectable very close up to the spathe—much less apparent than it was earlier in the week.

Cameras focused in on the flower structure, as Still and Pollak carried the two large pieces of the cut-away spathe over to the crowd. Hands reached out for a touch; noses leaned in for a sniff. Spike’s spathe was set out on a gallery table so that everyone could touch and admire it before it begins to wilt.

OVERHEARD: “SPIKE WAS THE TOPIC OF DINNER CONVERSATION WITH OUR TWO SONS EVERY NIGHT FOR THE PAST WEEK.”

While television camera crews stepped in for close-ups on the plant’s flowers, interviewers questioned the scientists: Where does the scent come from? (It’s believed that the tall appendix helps produce the scent, though scientists are also investigating the female flowers themselves.) Would Spike bloom again? (Probably, but the corm would have to recover first, by sending up an annual leaf for a few years to gather more energy.)

Cross-legged on the floor opposite Spike sat Chicago artist Heeyoung Kim, who sketched intently during the entire process. Her intricate pencil markings captured Spike’s pleats and tightly clustered flowers—the beginnings of a botanical illustration that could inform future scientists studying the titan arum’s beautiful structure for years to come.

We have been so thrilled with the intensity of interest in Spike—it’s not every day that crowds gather to watch a plant grow! We’ll continue to keep you posted about possible pollen development, our scientists’ thoughts about Spike’s arrested development, and on the progress of the eight other titan arums now growing in our production greenhouses.