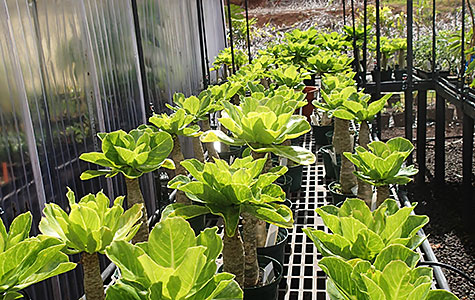 While zoos and botanic gardens around the world were closed to help flatten the pandemic curve, scientists at the Garden continued to work remotely to ensure the rare species they care for are not lost. This is important because plant species are being lost at an alarming rate, and botanic gardens play a central role in preventing their extinction. In a recent paper in the journal Conservation Biology, Garden scientists Havens, Fant, and Kramer joined colleagues at the Brookfield Zoo and institutions around the country to show that using a “studbook” approach to track all individuals held in botanic garden collections is essential to prevent the loss of genetic diversity. This approach follows a model developed by the zoo community and requires collaboration between gardens to determine the best plants to mate and produce offspring, maximizing diversity while minimizing inbreeding in global collections. Without this approach, collections of rare plant species conserved in botanic gardens are at risk of extinction themselves. Kayri Havens, Ph.D., who led the project, noted that “this paper provides a framework for global collaboration among botanic gardens that will be transformative for off-site, or ex situ, conservation of rare plants that can’t be seed-banked.” The Garden team received funding last year to work with scientists around the world to help implement this framework for some of the most challenging rare species in the world, and this work continued while scientists worked remotely. While tens of thousands of plants are in need of conservation, a majority can be seed banked to provide effective, long-term, ex situ plant conservation. However, for “exceptional species” (the roughly 20 percent of seed plants not suited to seed banking), a living plant collection is often the only ex situ conservation option available. The long-term survival of living collections, and their value for future conservation efforts, can easily be lost or limited without tracking of individuals and their genetic lineages. Because the zoo community has already established processes to do this for captive animal populations, we were able to test this approach to support conservation of four plant species at multiple botanic gardens around the world, which identified several actions needed to ensure that collections of rare plants held at botanic gardens are not lost and maintain their ability to support conservation over the long term.

Photo: Brighamia insignis, known as “Alula” in its native Hawaii, is likely extinct in the wild. Thanks to botanic gardens, this species has not been lost forever. However, its long-term survival prospects will be increased if zoo-style “studbooks” are used to track individuals and minimize genetic loss in collections.