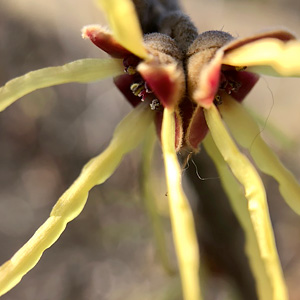 As gardeners develop an appreciation of native trees and shrubs, many become more willing to try these plants in their own landscapes. The unusual features of the witch hazel family make it an excellent choice for such adventurous gardeners. Witch hazel offers yellow and red fragrant flowers blooming at unconventional times; the ability to thrive in moist, claylike soil; good fall color, and tolerance of sunny or shady conditions.

Witch hazels can be seen growing in the wild in colonies along streams, in lowlands, and along riverbanks from Wisconsin and Quebec south to the Gulf Coast states. They have large, simple, toothed leaves on multiple, crooked branches that form a rounded outline in the landscape.

Witch hazels are quite effective as backdrops, hedges, and screens or as specimen plants in more open areas. Their upright-spreading shape encourages the underplanting of ground covers or early spring bulbs. Witch hazels tolerate city conditions better than most native shrubs.

While witch hazels can be showy in three seasons, certainly their fragrant flowers that bloom in fall and winter are of primary interest. Some can be the earliest shrubs to bloom, with their blossoms emerging while the brown seed capsules from the previous year are still attached to the branches, while some can be the latest, waiting until October. 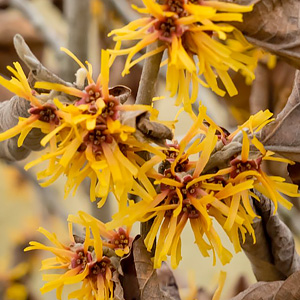 The Chinese witch hazel, Hamamelis mollis, is less hardy than the natives. Grown in the warmer parts of USDA zone 5 to 8, it is the most fragrant of them all. It is one of the earliest plants to flower in Illinois, with a profusion of slightly larger, yellow flowers appearing in late winter to very early spring. The downy, gray-green leaves turn yellow-orange in autumn. Specimens are located in the Farwell Home Landscape Garden and in the Japanese Garden.

'Superba' grows as a loosely-branched, upright, and up to 9' tall with a similar width. It will retain an attractive shape with little pruning needed, and from February to March it produces clusters of showy, fragrant blooms. 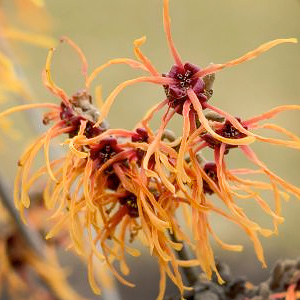 The vigorous hybrid witch hazels (Hamamelis x intermedia) are crosses between Japanese and Chinese species. Blooming from late February to March, their yellow-red petals unfurl on warm days but curl up tightly during chilly nights. The fall foliage is an attractive yellow-orange, a nice contrast to the bright green leaves of summer. Look for these selected cultivars at the Garden:

'Jelena' has flowers in an unusual blend of red, yellow, and orange. The fall color of its foliage repeats this color scheme. Look for 'Jelena' in the upper levels of the Dwarf Conifer Garden. 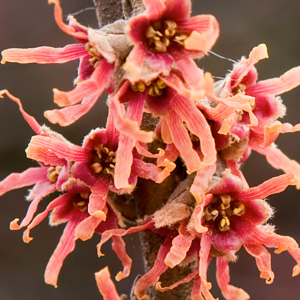 The vernal witch hazel, Hamamelis vernalis, is native to stream banks of the south-central portions of this country. It is the earliest shrub to flower in spring, and its small, yellow-red blooms can be prolonged in cold weather. At the Garden, it typically blooms from late February to early April, depending on the weather. It can form dense, multi-stemmed colonies along streams by sending out suckers. The medium green leaves turn a spectacular golden yellow in fall. It is more tolerant of higher pH soils than H. virginiana and grows well in poorly drained clay soils. The many plants situated in the Garden's parking lots are testament to this tolerance.

'Lombart's Weeping' is a spring-blooming witch hazel native to the Ozark Mountains areas of Missouri and Arkansas that is renowned for its intensely fragrant smaller-sized flowers. You can find them cascading down the Circle Garden retaining wall. 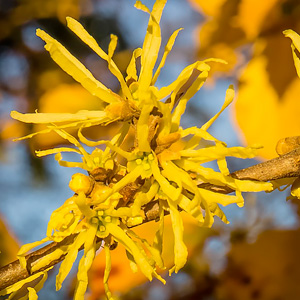 The common or Virginia witch hazel, Hamamelis virginiana, is a native of Illinois woodlands and can be found growing in shady sections of McDonald Woods as an understory tree. It is the last tree/shrub to bloom in the fall, usually in mid- to late October, with fragrant yellow, straplike petals. Gardeners can grow this witch hazel in their own gardens, where its oval to round form will reach up to 25 feet. Its clean, bright green leaves turn yellow in fall and often hide the spicy flowers blooming at the same time. The seed capsules discharge ripe seeds with an incredible, explosive, popping sound that can be heard more than 30 feet away.

'Harvest Moon' witch hazel flowers later in the fall than the species, around Thanksgiving and the harvest moon. Because the leaves have fallen, the abundant yellow flowers can be clearly seen, making this a beautiful plant when little else is flowering.

Witch Hazel at the Garden 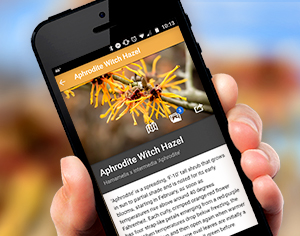 Download the GardenGuide App to search for witch hazel while you are here. See all of the species we have planted at the Garden, get plant information, and find plant locations relative to where you are within the Garden.

12 Plants for a More Fragrant Garden
Forcing Flowering Branches
Tree and Shrub Care Checklist
Which Witch Hazel Should be in Your Yard?
Winter Infographic: Plants in Winter 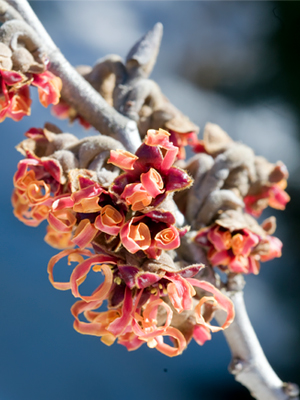 From ancient Native American tribes to early Puritan settlers to modern-day working mothers, for years many have found witch hazel to be a beneficial addition to their medicine cabinet.

Here are some of witch hazel's noted uses beyond the garden: 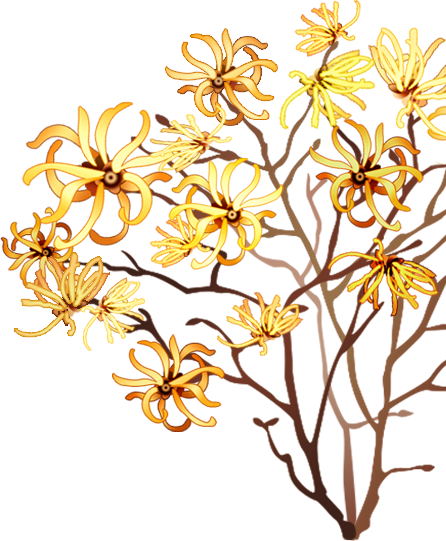