There are many definitions for the word “zen.” It’s been described as “a state of calm attentiveness in which one's actions are guided by intuition rather than by conscious effort.” It may be defined as having qualities such as meditative calmness often associated with practitioners of Zen Buddhism.

The term “Zen garden” was first coined by Loraine Kuck, in her 1935 book “100 Gardens of Kyoto.” By the 1950s, the term became popular as a way for Westerners and Europeans to describe the minimalistic rock-and-sand gardens found at Zen Buddhist temples in Japan. The correct term for this type of garden is karesansui, or dry garden.

A Zen Garden is the epitome of control, moderation and simplicity. Rocks are an essential part of the garden, believed to be the “bones” of the earth. Carefully placed stones and boulders symbolize mountains while white sand represents flowing water. The sand in a dry garden is raked in patterns to represent waves and ripples. Unlike flower-filled perennial borders, the zen garden is reduced to bare essentials—sand and rocks and a limited plant palette. These sparse elements help one avoid distractions while stimulating meditation. 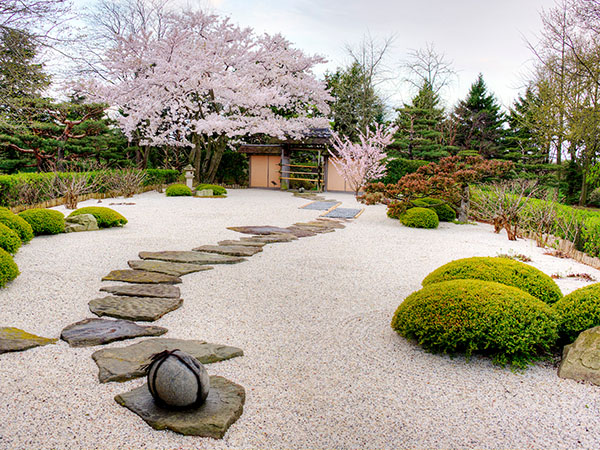 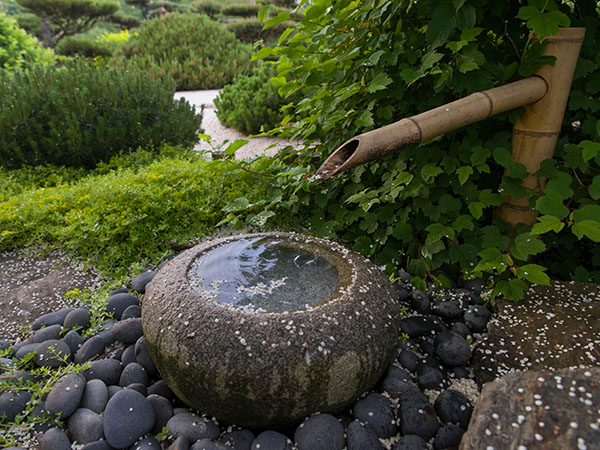 You can experience the zen or dry garden in the Elizabeth Hubert Malott Japanese Garden. It is one of 18 stops in this stunning setting. A tour of the garden can be a thought-provoking experience. It illustrates the Japanese respect for nature and timelessness.

Large rocks are partially buried, appearing as if they have been in place forever. The short bloom period of flowering shrubs, perennials and ornamental trees reflect the balance between the ephemeral existence of human life and nature’s timelessness. The weathered pine trees—representing longevity in Japanese culture—are pruned and trained to give the illusion of old age. And, the half-buried, moss-covered rocks all add to the illusion.

This 17-acre lakeside garden features three islands. Two—Seifuto (Island of Clear, Pure Breezes) and Keiunto (Island of the Auspicious Cloud)—are open to the public. The third, Horaijima (Island of Everlasting Happiness) is symbolic of paradise—in sight yet so elusive. Sansho-en is a garden of the kaiyu-shiki or promenade style, in which the visitor walks a path of discovery or journey. This 17th-century landscape style is composed so that views are first concealed and then revealed to the delight of visitors.

Water in the Zen Garden

A common garden theme in Asia is the perception and enjoyment of the moon. The Hirosawa Pond (Hirosawa-no-ike) and Osawa Pond (Osawa-no-ike) in Japan are remnants of Heian period gardens (794-1185 CE). The Hirosawa pond was constructed as part of a temple garden built by the grandson of Emperor Uta. The pond is featured in many Japanese poems and the landscape offers cherry trees, Japanese maples and willows—a popular spot for moon gazing. Visitors enjoy the moon rising over the Higashiyama mountains, which are reflected in the water. When the weather conditions are right, the moon appears as a giant glowing disk over the mountain range, quite a spectacular view.

Moonlight reflected in water has long been admired in Japan. The Osawa Pond is a manmade water feature in Kyoto next to Daikaku-ji Temple. This pond is the oldest known surviving part of any garden in Japan. Emperor Saga ordered its creation during his reign (809-823 CE) or shortly after, and it was part of the garden while he resided in the temple. Today, visitors experience the garden from the veranda, but also while sailing on the pond in early autumn to view the harvest moon. On clear nights, you can experience the summer moon in the Malott Japanese Garden. 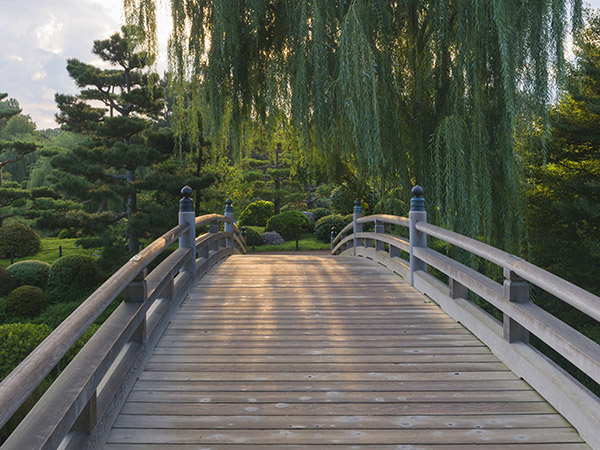 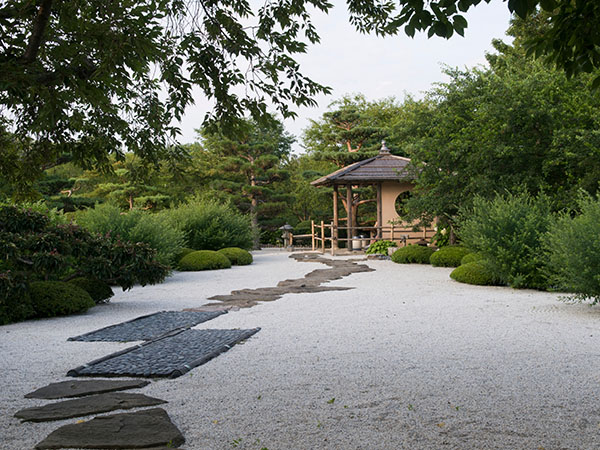 Elements of a Zen Garden

Zen gardens are intended for relaxation, meditation and contemplation. A special place is given to every plant, rock and the sand in an effort to create harmony, tranquility and balance. Nature is represented from a minimalistic point of view. Zen gardens can be large or small and because they are dry gardens, they typically don’t need an irrigation source. (Miniature zen garden kits are sold for use indoors.)

One key to creating a zen garden is avoiding excess—overloading the site with plants, too many rocks, lanterns or statues. The main characteristics of the zen garden are austerity and simplicity. Not every home landscape is suitable for a zen garden, but that doesn’t mean you can meditate in your own outdoor space, whether it’s a garden, balcony or deck. Or, visit the Garden and enjoy a little relaxation and meditation on a quiet bench. Pick a spot and relax your mind and body. Take a deep breath, close your eyes for a few minutes and tune in to the sounds of nature. 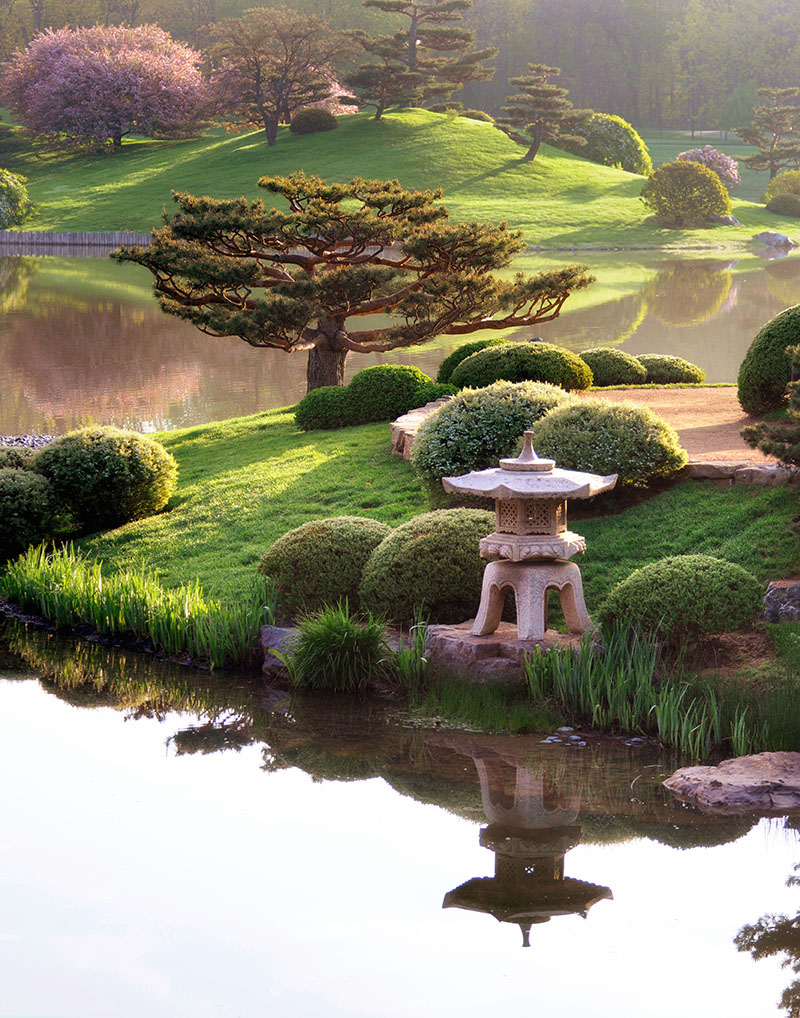