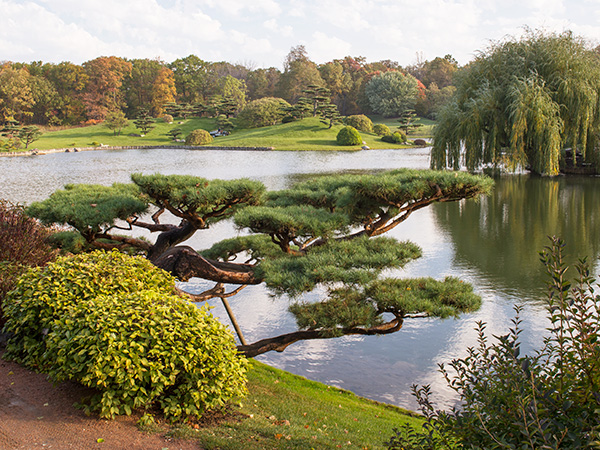 Visitors to Japanese gardens often have questions about the types of plants they see, the design of the garden and the objects that are positioned around the garden. The horticulturist for Sansho-En, the Japanese Garden at the Chicago Botanic Garden, has answered some of the most common questions:

WHAT IS THE SIGNIFICANCE OF THE ROCKS PLACED AROUND THE GARDEN?
Rocks are considered to be the "skeleton" of the earth and of a garden; they are the first element put into a garden during construction. Skilled rock setters can make rocks look as if they have been a part of that setting forever.

WHY ARE THE PLANTS SO HEAVILY PRUNED?
The goal behind Japanese garden design is to make a representation of nature. The plants are pruned and groomed to appear ideal or almost perfect. During the growing season, most shrubs are pruned every two weeks. Pines and large deciduous trees are pruned up to three times per year, as needed. The act of grooming and pruning makes the gardener become one with the plant and with the garden. In most homes in Japan, it is a daily ritual to groom a garden by removing dead leaves and insects, pruning plants, and finally, sweeping the garden clean.

WHAT ARE THE WATER BASINS FOR?
Water plays a very important role in Japanese gardens. Basins are placed throughout the garden in special locations to allow visitors to purify themselves, both physically (by washing their hands and drinking the water) and spiritually (by symbolically washing away their cares).

WHAT IS A ZEN GARDEN?
The term "Zen garden" was coined in the 1950s to refer to the abstract rock and sand gardens found at Zen Buddhist temples in Japan. The correct term for this type of garden is karesansui, or dry garden. Many of these gardens are made strictly of sand or gravel beds along with an arrangement of boulders. Others may include plants. The sand in a dry garden is raked in patterns representing waves, ripples or even rice paddies. Other patterns are simply abstract and follow the flow of the garden.

ARE ALL THE PLANTS IN JAPANESE GARDENS FROM JAPAN?
The plants in Sansho-En were chosen because they grow well in the Chicago area, not because they are native to Japan. Some Japanese plants require an acid soil instead of the Midwest's alkaline soil, while others cannot tolerate the region's cold winters. All gardeners must understand the growing conditions for their plants before placing them in a garden. Any plant may be used in a Japanese garden if it conforms to the design of the garden and is maintained according to Japanese gardening principles.

WHY AREN'T THERE MORE FLOWERS IN THE JAPANESE GARDEN?
There may not be many flowering perennials or annuals, but there are many flowering plants. They're chosen specifically for their short bloom time to reflect the fleeting quality of human life, which is in direct contrast to the infinite nature of the rocks. On Sansho-En, look for iris, rhododendron, plum, quince, and magnolia, among others.

WHAT IS THE SIGNIFICANCE OF THE STONE LANTERNS?
In Japan, lanterns were used to light paths outside Buddhist temples. When a new garden was added, old temples were raided for rocks, plants, and lanterns. When teahouses became popular, gardens were added to them, and the garden quickly became an important part of the tea ceremony itself. Since tea ceremonies were often performed at night, lanterns would light key areas of the garden. Whether used for lighting or ornamentation, lanterns should be located where a path turns or near a gate or doorway.

ARE THERE STATUES OF BUDDHA IN THE GARDEN?
Buddha statues, as well as other religious artifacts, are used mainly in temple gardens. Homeowners, however, might have one or two artifacts in their own gardens, either as good luck charms or for private worship.

WHAT IS THE IMPORTANCE OF PATHWAYS IN A JAPANESE GARDEN?
Paths are designed to guide visitors through the garden and allow visitors to see the garden from many angles. Designers can hide a view to create mystery or to open up a beautiful vista for a visitor turning a corner on a path. Paths keep visitors from damaging fragile ground covers such as moss and sedum. Paths in the dry gravel gardens also allow visitors to enjoy the garden without disturbing the carefully raked patterns and smooth surfaces.

WHEN IS THE BEST TIME OF YEAR TO VISIT THE JAPANESE GARDEN?
Sansho-en is designed as a public stroll garden. The plants were chosen because their ornamental characteristics appear at different times throughout the year. In spring, crabapples and azaleas are particularly beautiful. In early summer, irises bloom, cattails show off, and visitors can enjoy all the various textures and shades of green. In fall, bush clover blooms, cascading chrysanthemums line the walkways, and the leaves of many trees and shrubs begin to turn brilliant colors. Winter holds special interest because of the way snow piles on the pruned junipers, looking like blossoms about to burst, while the pine trees create fascinating shadows on the snow-covered ground. At all times of the year, the peaceful nature of the garden allows visitors to sit quietly, listen to the birds, and enjoy the beauty of the garden.