Greek mythology tells of the beautiful youth, Narcissus, who was so self-infatuated that he spent hours at the garden pool gazing at his reflection. Echo, a mountain nymph, fell madly in love with him, but her love was not returned by the vain Narcissus. Echo wasted away from loneliness until only her voice remained, which disappeared into the mountains to mock every sound it heard. The gods, angry at the cold and conceited Narcissus, changed him into a flower, destined to spend eternity at the water's edge nodding at his reflection. 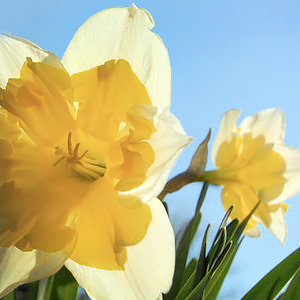 Who can possibly doubt that spring has arrived when the tiny nodding skirts of the first narcissus pop through the warming soil? Although tulips have their place in the spring theme, daffodils are truly the signature that the sun is warmer, robins are returning, and the dormant garden is springing back to life.

The genus Narcissus consists of many known species, ranging from the familiar large daffodil to the tiny poet’s narcissus and all manner of hybrids in between. The names daffodil, narcissus, and jonquil are all commonly used to describe various species and hybrids. Technically, the genus name, Narcissus, is correct for them all. Typically, the large-cupped yellow varieties are called daffodils and the tiny, multiple-flowered types are referred to as jonquils. They are all Narcissus.

The countless hybrids and species have been grouped into 13 divisions by floral parts, coloration, and species derivation. These divisions are used in naming and in categorizing daffodils for flower shows. Divisions include Trumpet, Double, Large-Cupped, Small-Cupped, Split-Corona, Triandrus, Cyclamineus, Jonquilla, Poeticus, Tazetta, species and wild forms, and miniature daffodils. These classifications are essential to know if you are breeding or showing narcissus. 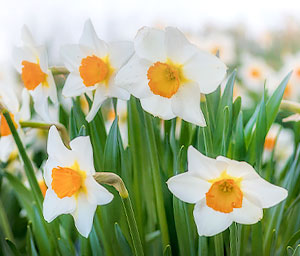 When choosing narcissus for your garden, think beyond the standard bright yellow 'King Alfred' or clear white 'Thalia' and consider some of the smaller, sweetly scented narcissus. For example, N. minor is only 6 inches high. N. poeticus has extremely fragrant flowers with wavy edges rimmed in red. N. bulbocodium, aptly named ‘Hoop Petticoat’, has a distinctly flared trumpet surrounded by very small petals. There exists such a wide array of sizes and shapes to choose from that with judicious selection, you can have them blooming from early April through early June.

Narcissus are planted in the fall in the Midwest so that they may establish roots before winter. Choose a well-drained spot that gets plenty of sun. For depth, plant the bulbs three to four times the height of the bulb itself. Space the bulbs 4 to 6 inches apart, depending on the species. Narcissus looks best when planted in masses, so plant six to ten together in a clump. A simple way to plant is to remove the soil from the hole at the correct depth for the clump of bulbs and mix the soil with compost. Then place the bulbs and cover with the soil mix. Narcissus rarely need fertilizing, although a mulch after planting will help them to establish. 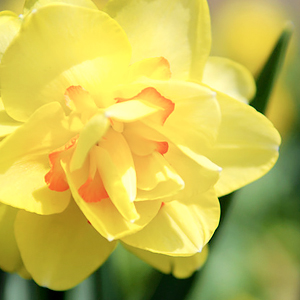 After the narcissus have bloomed and faded, remove the seedheads, but don’t remove the leaves until they begin to yellow. The leaves manufacture food for the bulb, so for consistent blooming, they should be left as long as possible.

If using narcissus to naturalize, toss the bulbs casually over the area you want to plant. Then plant each one where it falls. This will give you a look as if nature had planted them herself.

Narcissus are hardy bulbs that will spread over time, although they benefit from division about every four to five years. Dig the clump after the leaves have dried up (early to midsummer) and either replant immediately or store in a dry, airy place until autumn.

Another advantage of having narcissus in your yard is that deer and rabbits don’t eat them. While the wildlife is feasting on crocus and tulips, the narcissus spring to bloom without a nibble. 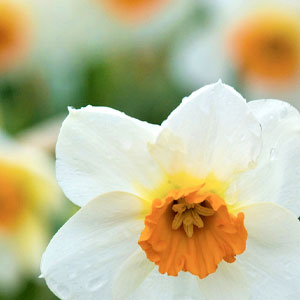 Daffodils at the Garden 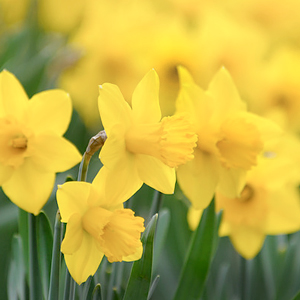 Daffodil Information
From the Experts

How to Plant Daffodil and Tulip Bulbs 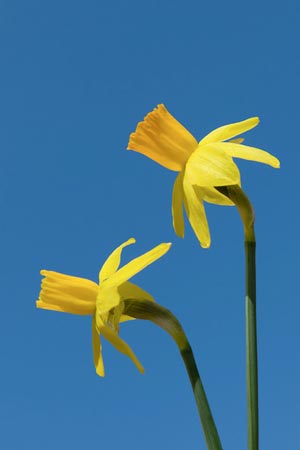 A Year in Bulbs: Part Two

A Year in Bulbs: Part Three