Under a canopy of native oaks, eastern bluebirds nest in hollow trees and rare butterflies hover over patches of lake sedge—all hopeful signs in this fragile ecosystem, a treasured piece of a larger oak woodland that flourished in the Midwest over a century ago.

In an ongoing effort to protect and restore the McDonald Woods, Chicago Botanic Garden ecologists and volunteers fight off invasive species such as buckthorn and garlic mustard. They also collect and scatter the seeds of native grasses, sedges, and wildflowers; the intent is to keep the 100-acre Woods as natural as possible, reminiscent of the days when early settlers described the land as a place of open oak groves with a carpet of grasses and wildflowers beneath spreading tree branches. The Woods is home to at least seven state-listed threatened or endangered plant species—northern cranesbill, forked aster, dwarf raspberry, bent-seeded hop sedge, brome hummock sedge, small sundrops, and dog violet—and is a site of critical scientific research on endangered species and habitat restoration. 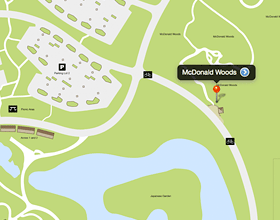