It's the perfect place for children to engage with nature, with raised garden beds at just the right level for little arms to reach toward the soil.

Budding gardeners and future scientists learn by doing in the Grunsfeld Children's Growing Garden as they water, weed, and harvest plants, guided by expert instructors in the sort of hands-on learning that makes a lasting impression. On weekends during the summer, families can enjoy drop-in activities here, growing closer together as they get closer to nature.

A rain-barrel-based watering system helps keep the plants growing, and solar panels on the roof of the Tool & Potting Shed offset electrical needs. The garden is surrounded by an open-weave fence covered with different varieties of climbing plants, creating a safe, enclosed space for space for children. Leading into the garden on either side of the stone walkway are two welcoming living walls covered in different species of sedum.

The Children's Growing Garden is divided into two outdoor garden classrooms, with a combined total of six raised beds, six in-ground demonstration beds, and five display beds. Wheelchair-accessible trays in the raised beds enable students of all abilities to join in the activities. While the growing plants in the raised beds are watered and weeded, the demonstration beds (maintained by horticulturists) show young participants what their plants will look like when they are grown.

The Grunsfeld Children's Growing Garden is made possible through the generosity of Esther Grunsfeld Klatz and Ernest A. Grunsfeld III; the Robert R. McCormick Foundation; the Guild of the Chicago Botanic Garden; and the support of the Public Museum Capital Grants Program, Illinois Department of Natural Resources, Illinois State Museum; Lorraine Ipsen-Stotler; Barbara and Richard Metzler; and the Colonel Stanley R. McNeil Foundation. 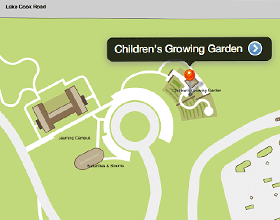