The ABCs of Our Native Bees 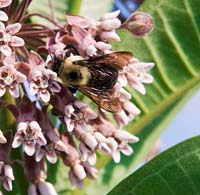 Did you know there are more than 20,000 species of bees worldwide? That’s more than all the mammals, amphibians, and reptiles combined! You may be familiar with bumblebees and honeybees, but Illinois boasts 500 species of native bees—metallic green and blue bees that look nothing like the fuzzy yellow and black icon.

Bees are critically important in pollinating native plants, and the relationship can be complex. For instance, some flowers require “buzz pollination,” whereby a bee grabs onto a flower’s anthers and must vibrate at a particular frequency for the flower to release pollen.

To evaluate the best habitats for native bees, the Chicago Botanic Garden has collected bees from all around the Chicago region—green roofs, city parks, and restored prairies. The work of the Garden’s Rebecca Tonietto, Plant Biology and Conservation Ph.D. student, has revealed that bees can thrive in urban environments if we humans help instead of harm their habitats.

Attracting Bees to Your Backyard

Human beings play an important role in protecting one of nature’s premier pollinators. Here's what you can do to help: