Persistence can be a good trait for prairie plants. Take this tale of the return of the Hill’s thistle (Cirsium hillii) to the Dixon Prairie at the Chicago Botanic Garden.

I’m the assistant ecologist for the natural areas at the Garden. While managing some tall vegetation on the gravel hill of the Dixon Prairie in summer 2016, I noticed something I have not seen in a while. It was a thistle! 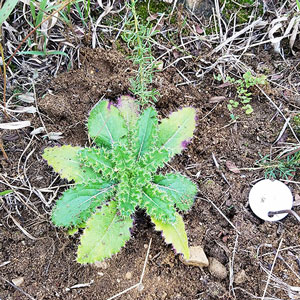 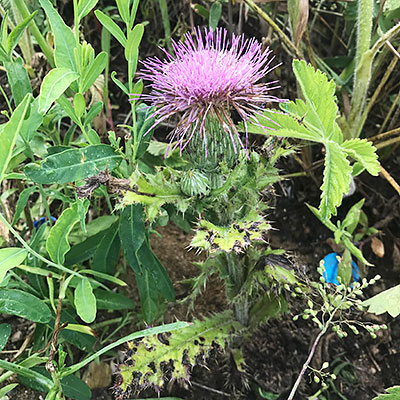 This thistle was not the Canada thistle (Cirsium canadensis), which is a non-native weed that is commonly seen along the roadsides and in your garden. What I stumbled on was Hill’s thistle (Cirsium hillii), considered rare in the Chicago region. Hill’s thistle was originally found throughout the Great Lakes region. It prefers drier prairies with less competition from taller plants. A number of species of bees visit and pollinate this plant. The plant is believed to be monocarpic, which means the plant dies after flowering and producing seed. I had to know more about this plant and where it came from.

While doing additional restoration management, I noticed a dirty blue tag next to the thistle, and I knew the appearance of the plant was not an accident. The thistle was planted in 2007 by Jeremie Fant, Ph.D., a molecular biologist at the Chicago Botanic Garden, as part of his research on the low flowering and percentage of seed set of populations in the Chicago region.

Through his research, Dr. Fant had determined that the percentage of seed set (amount of viable seed) for Hill’s thistle was low. He began collecting seeds at multiple locations in the Chicago area in order to establish a population of thistle so we can better learn the ecology of this plant and how we can save this plant from being extirpated from our area. The seed collection process is not easy: Mesh bags are placed over the flower heads after pollination so the seeds don’t blow away.

In 2007, the plant production team at the Chicago Botanic Garden used the collected seeds to propagate plants. Of the viable seed that had been collected, only 16 plants were produced. Those Hill’s thistles were planted in various locations on the Dixon Prairie gravel hill in 2008.

Most of the plants died the following year due to drought. Without any signs of thistles, monitoring was stopped and all the plants were presumed dead.

Fast forward to 2016, when I found a lonely basal rosette of Hill’s thistle underneath a lot of tall vegetation. Fant was pleasantly surprised—and his team sprang to action.

With this being the only Hill’s thistle in bloom, pollen needed to be collected from a different location. Bringing in pollen also allows for more genetic diversity and better seed production. The pollination process graduate student Nora Gavin Smyth used fascinated me. It involved using a pinned bee to collect the pollen, which then pollinated the thistle at the Garden. “The bees do a better job of collecting the pollen and holding onto it,” Gavin Smith told me.

Next, data was collected and new plants were produced with the help of another graduate student, Jacob Zeldin. He was able to propagate another 16 Hill’s thistle, and this new population of Hill’s thistle was planted in two locations in October 2017. From that sole plant, we finally were able to see Hill’s thistle bloom in the Dixon Prairie for the first time in 2018. 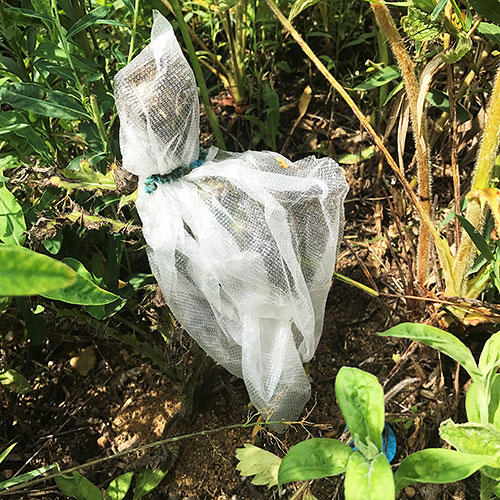 Mesh bags are placed over the flower heads after pollination.

Planting and tagging the new population of Hill’s thistles.

It is remarkable that it took almost ten years for the thistle to bloom for the first time, and the 16 new thistles were planted about ten years after the original planting. As we know from the titan arums (Amorphophallus titanum), also known as corpse flowers, at the Garden, the bloom cycles of plants can be long—and unpredictable.

All the thistles are doing well, and we look forward to seeing them again next spring. It only took about ten years for Hill’s thistle (Cirsium hillii) to return to the Garden, but who's counting? The Hill’s thistle is back where it belongs.

Jim Jabcon is an assistant ecologist at the Chicago Botanic Garden who tends the natural areas, including the Dixon Prairie, McDonald Woods, and the Skokie River Corridor. His efforts include removal of invasive species and seed collection and sowing in order to promote more diversity in our natural areas.