Leaf Miners: the Inside Story

Leaves are intriguing—with all their shapes, colors, textures, and their incredible ability to harness the energy of the sun. But when you come to realize that there is a whole world living within them, you can’t help but be amazed.

Imagine driving into a parking garage. At first, we might get the impression that the floor and ceiling are too close together, and we might have the feeling that the roof of the car is going to collide with something. Now imagine this same scenario, only this time, imagine it happening between the upper and lower surface of a leaf. There is a huge diversity of insects that live at least part of their life cycle inside of leaves. This group of insects is generally known as leaf miners.

Most of us have seen a caterpillar munching away on the edges of a leaf, like a monarch caterpillar on a milkweed, cutting away pieces until the leaf is mostly gone. There are tiny caterpillars or grubs (the larval stage of those insects) that live inside leaves, and that only eat the tissue between the upper and lower surface of the leaf, leaving the edges and surfaces intact.

In order to occupy the incredibly thin space within a leaf, most of these larvae are flat and move their heads back and forth from side to side as they excavate the material in front of them. Usually, the adult insect lays an egg on the leaf of a host plant and when it hatches, the very small larva burrows into either the upper or lower surface of the leaf to begin its life inside. Like most of our native insects, these leaf miners usually have very specific requirements as to which plant species they can survive on. Think of these plant-eating insects as mobile chemical plants. They have evolved the ability to process the chemicals produced by certain species of plants that can then be used to sustain their lives. This relationship is so specific that some insects cannot be identified unless we know which species of plant they eat. Two essentially identical species of insect are sometimes identified by the fact that they each can only survive on one species or genus of plant. This is also important when it comes to nonnative plants. Since these insects did not evolve with nonnative plants, they cannot eat those plants.

Many of these species of insect can be identified by the patterns they make in the leaf. The patterns may start out as very tiny trails in the leaf that continually get larger as the larva grows. Some larva only produce narrow, snake-like trails in the leaf, while others consume the tissue of the leaf in broad patches that create blotch-like shapes. Some only produce a trail, while others only produce a blotch, and others begin as a trail and become a blotch toward the end of their larval development. Another interesting aspect of their leaf-mining behavior is that they need to get rid of the plant material once it passes through their body. This excreted material is known as frass. Different species of insects deal with frass in different ways. Some excrete the material only at one end of their mine, or they may leave it all in a trail down the center of their mine, or they may push it to the sides of the mine, or may make particular patterns of it as they move along. The way they deal with this material is often helpful in identifying what species or family of insect is doing the mining.

These leaf-mining insects have a four-stage development, from egg to larva to pupa, and then to the adult stage. Some leaf miners pupate inside the leaf and eventually emerge from the surface of the leaf, while others exit the leaf to pupate on the surface of the leaf or drop to the ground and pupate in the litter or soil. Some may even cut a small disc out of the leaf and drop to the ground inside the disc. As a land manager interested in conserving the most native diversity possible in the Chicago Botanic Garden’s McDonald Woods, I am aware of these different life histories. Since some species pupate inside the leaves and stems of dormant plants, it is important to leave some dormant plant material standing over winter so the adults have the opportunity to emerge and propagate the species in spring. This might also be of interest to homeowners with native plants in your yards. Leaving some dead stems standing through winter can help conserve these native insects.

Although there is a huge diversity of leaf-mining insects, a large number of them are either in the fly family (Diptera) or in the moth and butterfly family (Lepidoptera). In my work in the McDonald Woods, I have discovered a great variety of species that mine the leaves of our native woodland plants. In the Lepidoptera family, all of the miners are moths. As you might imagine, even as adults, these leaf-mining moths are very small, sometimes only measuring 3 – 4 millimeters. Many of the species of moths that mine leaves in the woodland are mining the leaves of trees, so you might be less likely to encounter them up in the canopy. However, some of the moths mine the leaves of grasses and sedges, and if you know what to look for, they are fairly common. In the fly family, many of the miners can be found in herbaceous plants on the woodland floor, so they are more likely to be encountered by us as we walk along the nature trail.

Because these insects are small and their mines often go unnoticed, there is still a lot to learn about them. In fact, I discovered a species of fly in the McDonald Woods that is new to science. That means that it still has to be described and assigned a scientific name. I first found the mine on one of our less common woodland plants called American gromwell (Lithospermum latifolium). I then had to hold onto the leaf until the adult fly emerged and then I had to send the fly to an expert in Canada on this particular genus of flies (Calycomyza). He determined that it is a new species and will help to write the description and assign a name.

For those of you more interested in the life history of these incredible insects and how to identify their mines, I would suggest looking at Charley Eiseman’s Leafminers of North America. The details of the publication can be found at Charlie’s website charleyeiseman.com/leafminers. 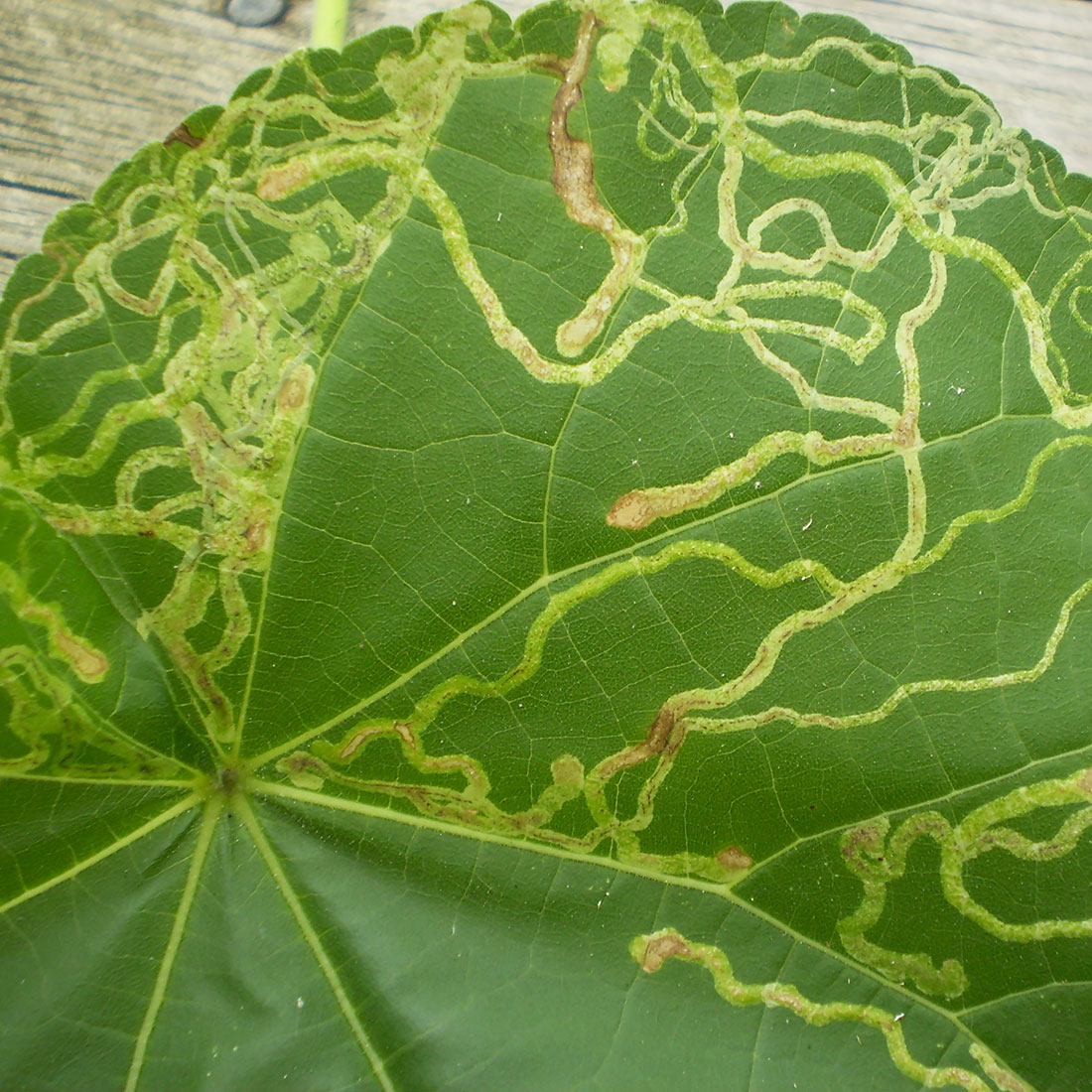 Although this fly (Calycomyza malvae) mines several species of native mallow and a few legumes, it also mines this exotic velvet leaf (Abutilon theophrasti), which is also in the mallow family. Native insects sometimes use exotic species if they are in the same family or genus. It is hard to know if the fly gets the same food value from them. 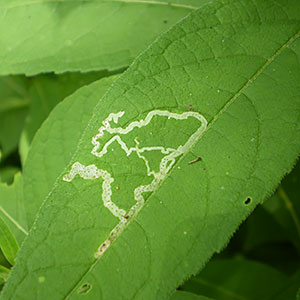 The leaves of woodland sunflower (Helianthus strumosus) are mined by a Liriomyza fly. 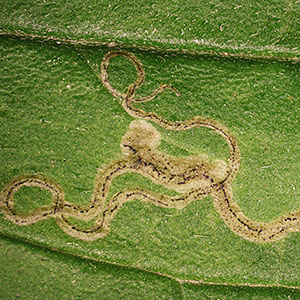 An undescribed fly species in the genus Calycomyza was found in a leaf of American gromwell (Lithospermum latifolium). 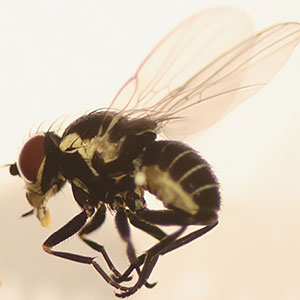 This new species of fly, Calycomyza sp., will probably be given a scientific name associated with its larval host plant, Lithospermum. 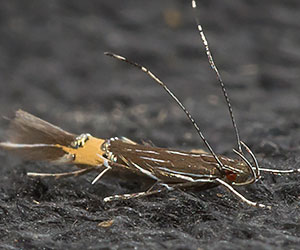 The caterpillar of this tiny moth (Cosmopterix clemensella) spends the entire winter inside the leaves of dormant sedges.