Got milkweed? Let’s apply some science

If you have heard about milkweed, you no doubt know about the plant’s unique relationship with the Monarch butterfly (Danaus plexippus). Milkweeds are the only plants on which monarchs lay their eggs, and its caterpillars, also called larvae, eat milkweed leaves to grow. But these plants have other interesting characteristics, including blooms that are amazingly complex.

Milkweeds are found mostly in open prairies and savannas and are known to most by their fruits, which are pod-like structures (follicles) that split open to release many seeds that catch the wind with their long silky hairs (coma).

Most people are familiar with common milkweed (Asclepias syriaca), which occurs commonly along roadsides, the edges of farm fields and degraded prairies. Two other fairly common species are whorled milkweed (A. verticillata), which often can be found at the very edge of highways where there is little competition or dry pastures and degraded prairies, and swamp milkweed (A. incarnata), which is the only species we have that grows in marshes. You are not likely to see the other 11 species that occur in the Chicago area because some are so rare that they have been designated as endangered species and others inhabit native habitats that have become uncommon in the Midwest.

The unique flowers of the milkweed rival orchid blooms in their complexity. If you look closely at a milkweed flower and try to deconstruct it into the parts of a flower, you may recognize the petals but that is about all. Milkweed flowers do not appear to have either sexes, but both the female part of a flower (pistil) and the male part (stamen) are present. In fact, the stamens and pistil are fused together in a structure called a gynostegium.

The pollination of milkweeds is also unusual. A great variety of insects visits the flowers. Bees, butterflies, and wasps are the primary pollinators. Nectar is produced in the hoods of the flowers, which attracts pollinators. Instead of individual pollens grains, milkweeds produce a structure called a pollinarium comprised of two sacs (pollinia) full of pollen. The entire pollinarium is extracted from the flower by a visiting insect and deposited on another flower.

Cross pollination occurs when an insect lands on the center of the gynostegium to forage on nectar in the hoods. The surface is slippery, causing the insect to slip and hook on to the pollinarium. Those pollen sacs have a dark, sticky structure, which aids in the transfer of the pollen sacs to the insect. But not all insects are successful; some are not large enough to escape the pollinarium’s grasp on its leg — an unfortunate situation for the insect! 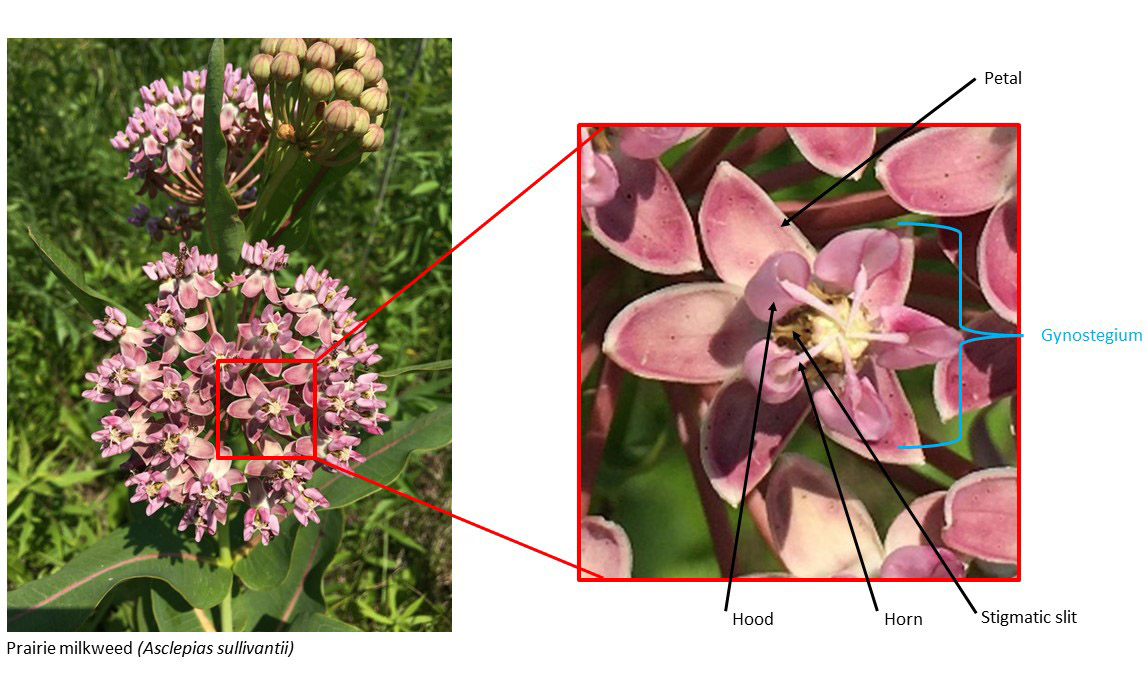 There are so many flowers in close proximity on a milkweed plant that it seems likely that a pollinator that has successfully extracted a pollinarium would just move it to an adjacent flower on the same plant and cross pollination would be thwarted. However, pollinariums must twist ninety degrees to be successfully inserted into a stigmatic slit, and this doesn’t happen right away. That means there is a good chance the insect carrying the pollinarium will have moved to another plant before the ninety-degree twist occurs. This improves the chance of cross pollination.

Milkweeds also employ a strategy to ensure seed production after pollination. There are a lot more flowers on a milkweed plant than the number of fruits produced, but only one or two pollinated flowers develop into mature follicles. The energy it takes for a plant to produce a healthy follicle is considerable, so the other pollinated flowers are sacrificed (aborted) to allow the plant enough resources to bear healthy seeds to improve its chances to successfully reproduce. 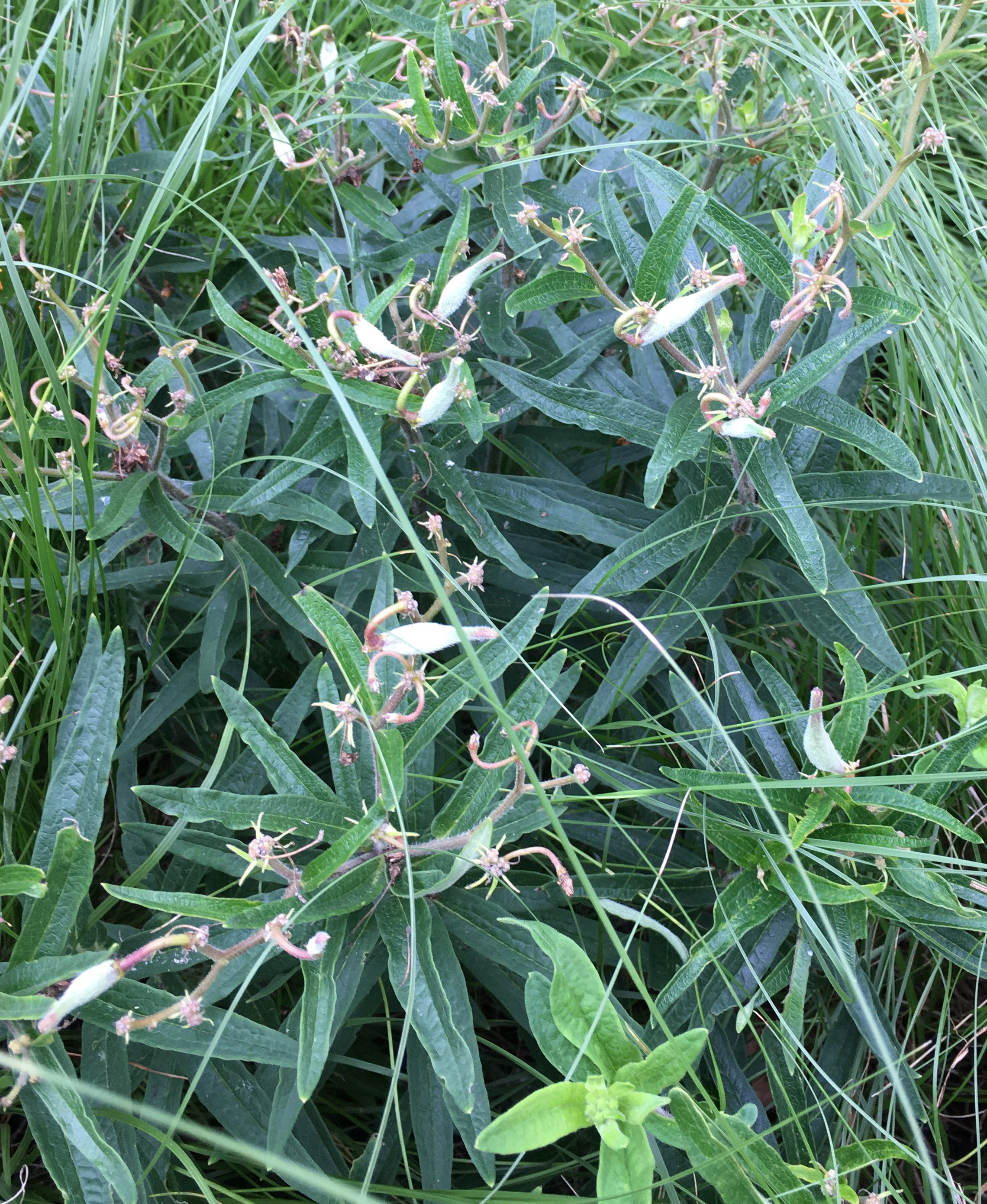 Next time you see a milkweed in bloom, take a closer look at its flowers. They are good examples of what millions of years of plant evolution can create. 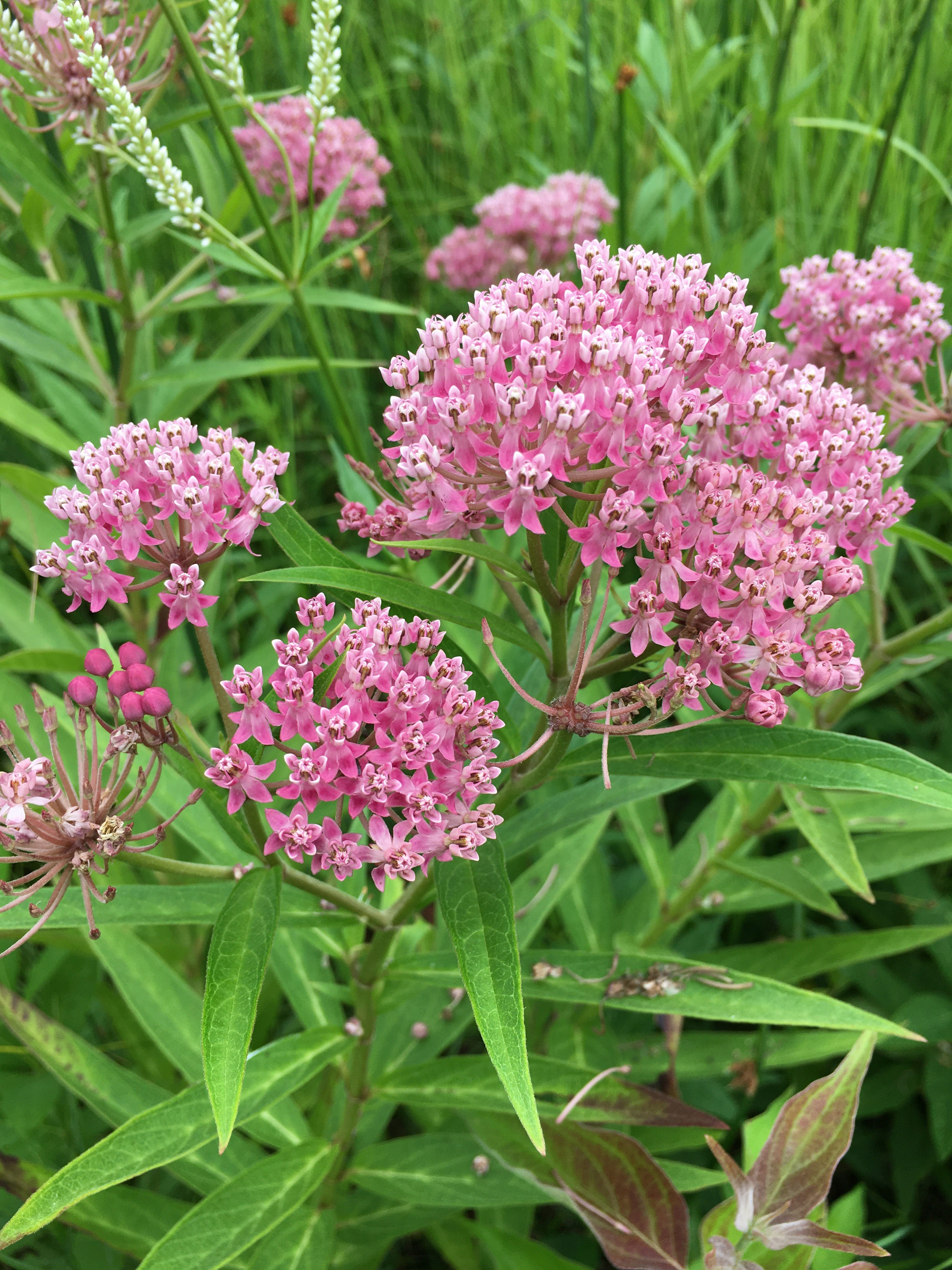