Graminoid is a term created to encompass all of those grass-like plants with narrow leaves and barely noticeable flowers. Yes, grasses and grass look-alikes do have flowers! All plants need to reproduce and they do so primarily by producing flowers. Unfortunately, the graminoid has a small and much reduced flower, often without showy petals. The function of most flower petals is to attract insects. Flowers with petals generally have sticky pollen that attach to the legs or body of an insect to be carried to another flower on a different plant so that cross pollination can happen and (voila!) the offspring of two parent plants is represented by a seed. Petal-less gramioid flowers produce dry pollen that is carried by the wind, not an insect, to another flower of the same species with the same effect—seed production. All that graminoid pollen, mixed with that of other wind-pollinated plants, is the bane of those who suffer from hay fever. 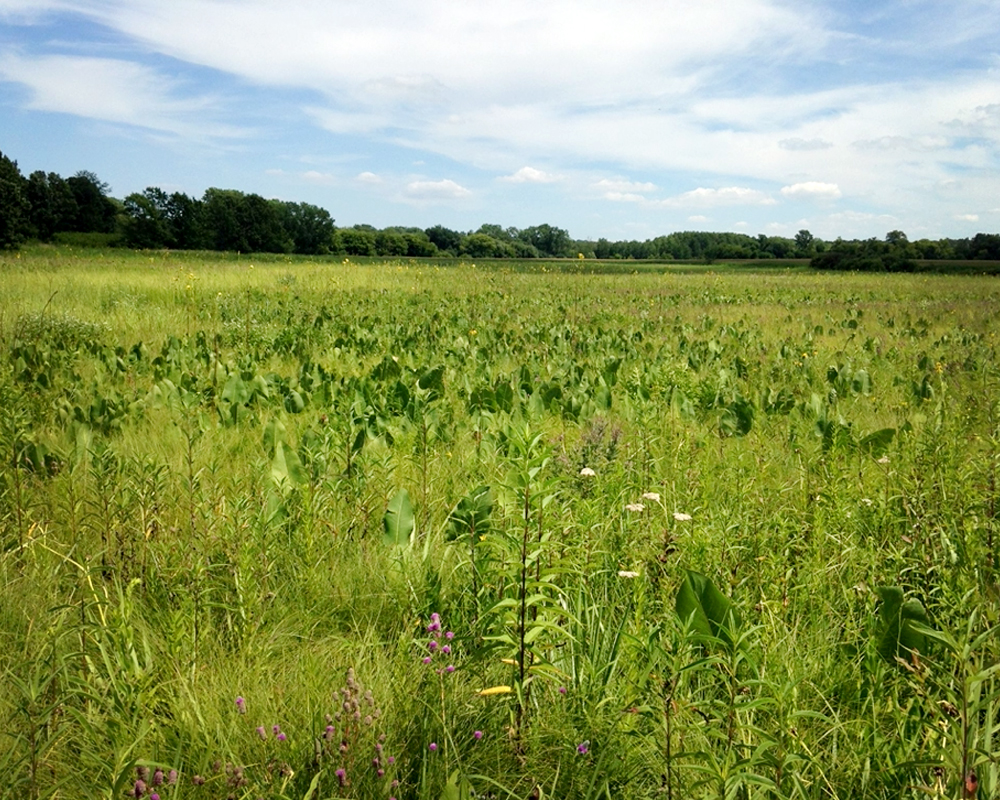 Graminoids such as grasses, sedges, and rushes are well represented in prairies. Grasses—the most dominant graminoid in prairies— have evolved to thrive with grazing animals. In most plants, the growth of the plant occurs at its branch tips. When the tip is removed by a grazing or browsing animal, it can no longer grow (although lateral branches can continue growth). Grasses, however, have their growing tissue at the base of the leaf and are, therefore, well suited for landscapes dominated by grazing animals (or lawn mowers). They can tolerate repeated clipping of the leaf tip and continue growing. 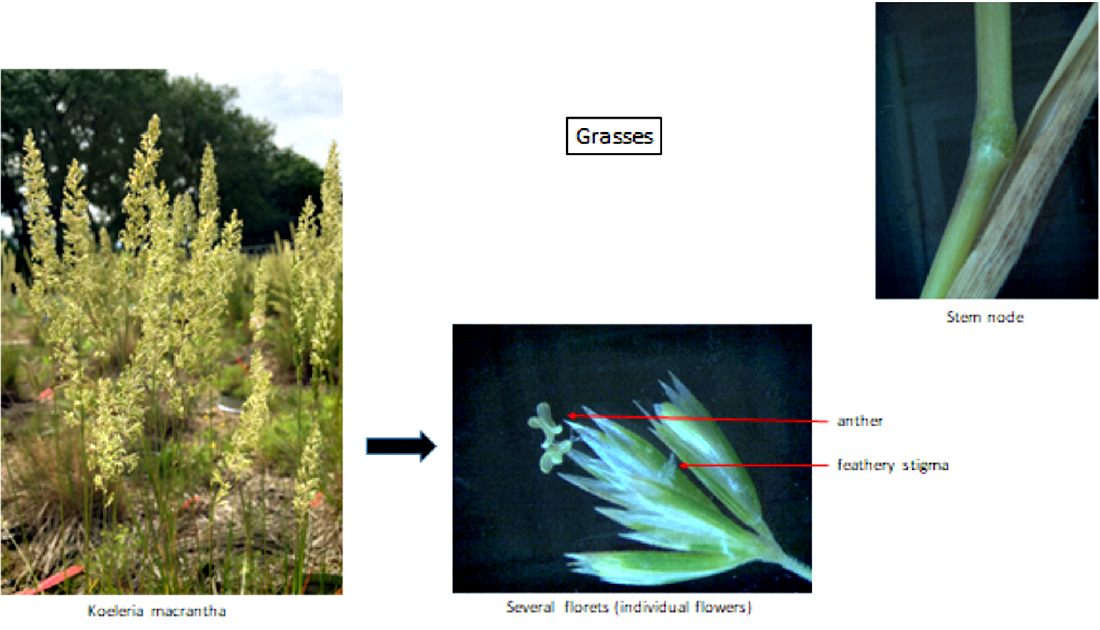 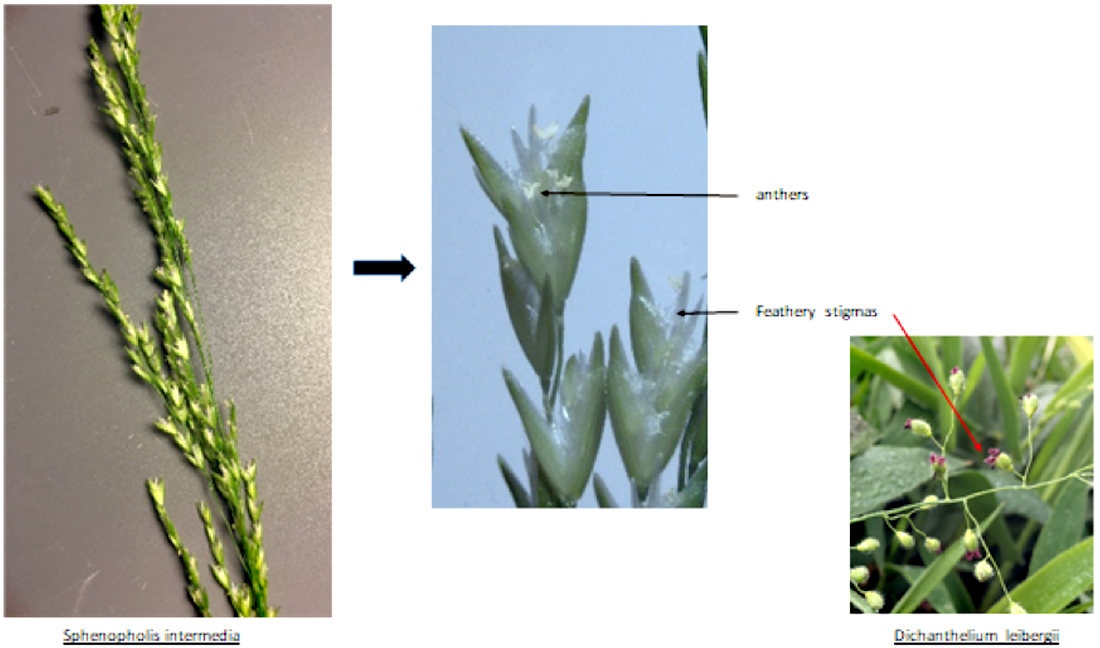 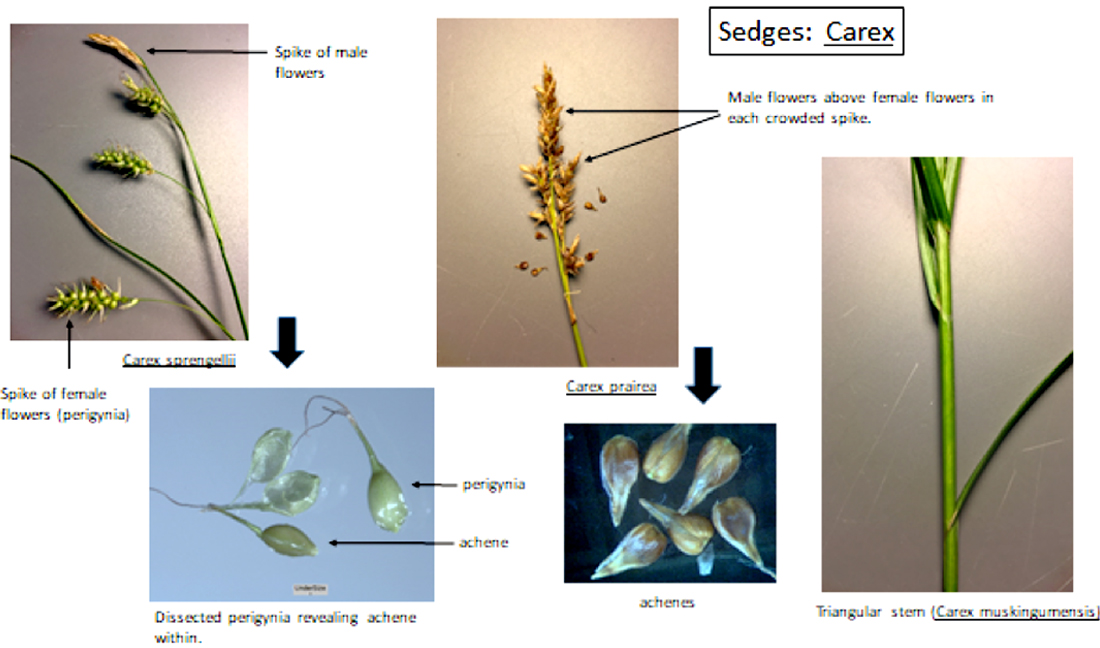 In addition to grasses, there are other grass-like plants that fall into the category of graminoids. The Cyperaceae or Sedge family have grass-like members. The largest group in this family are in the genus Carex. Although not as abundant in prairies as they are in woodlands and wetlands, they are the second most dominant graminoid behind grasses. From a distance, it is difficult to distinguish the Carices (plural of the genus Carex) from the grasses, but up close there are quite a few differences. The stems of grasses are usually hollow and either round or flattened in x-section. Those of the Carices are usually solid and triangular in x-section. Also, grass stems are jointed where Carex stems have no joints or nodes.

The flowers and fruits are also different. In grasses, the flowers are usually sandwiched between two specialized bracts called the palea (inside bract) and lemma (outside bract). The fruit of a grass is a grain or caryopsis where the ovary (female part of the flower) wall is fused to the seed within. For the Carices, male and female flowers are separate and the female flower is enclosed in a sac called a perigynium. The seeds that develop within the perigynia are achenes where the seed is not fused with the ovary wall.

Occasionally, you may come across another graminoid called a rush in the prairie. They have round stems like grasses but are not jointed. Their tiny flowers appear to have petals (actually called tepals) but they are not colorful and do not attract insects. Their fruits are not a caryopsis or achene but a capsule that contains hundreds of very tiny seeds.

Despite their lack of showy flowers, the graminoids play an important role in the prairie. Grasses, in particular, support a very thick mass of intertwining roots that help prevent wind and water erosion of the soil. Their abundant roots also incorporate lots of carbon into the soil. It is not just burning fossil fuels that has elevated the temperature of the earth; the destruction of the prairies for agriculture is also a contributing factor. 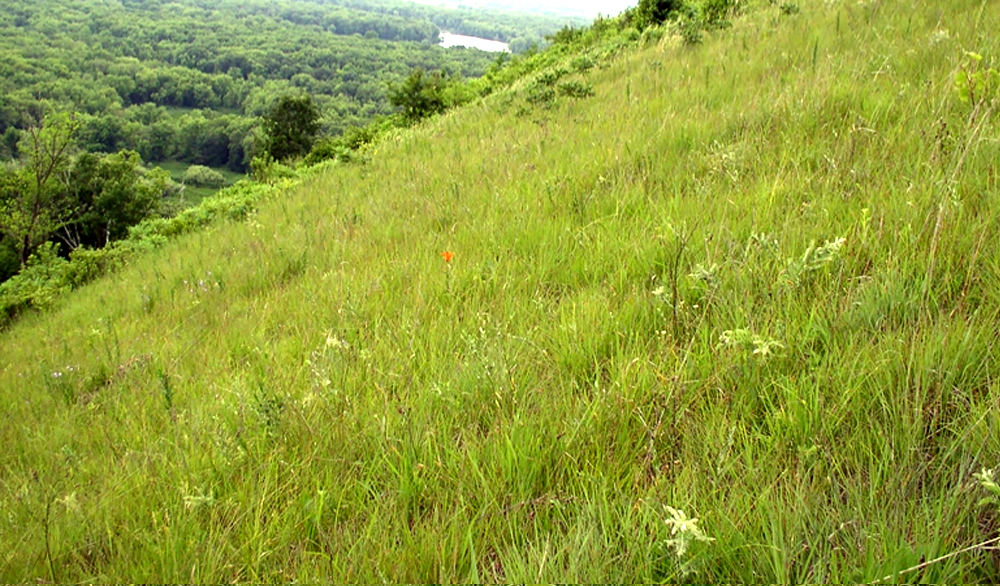 Get to know these often overlooked yet incredibly important members of the prairie. Graminoids deserve a second look—just make sure it is a close look.