The Moss Tree of Life 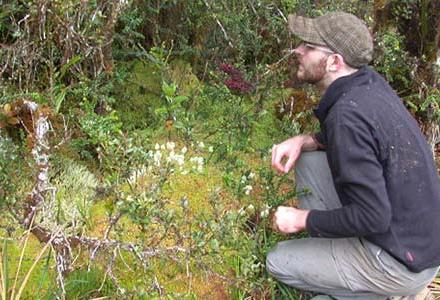 Pleurocarpous mosses are traditionally defined as having short, lateral reproductive branches. Pleurocarps (Hypnanae) compose the most speciose lineage of mosses, a result of an explosive radiation during the Jurassic period, at a time when flowering plants began to dominate many terrestrial environments. Repeated multidirectional habitat transitions occurred as this group evolved, leading to the loss of morphological characters that may be used to describe groups. Furthermore, phylogenetic analyses based on targeted gene sequencing have been unable to resolve many relationships, including those along the backbone, within the pleurocarps. In 2013, we began work on a National Science Foundation-funded project, "Assembling the Pleurocarpous Moss Tree of Life." We are using cutting-edge techniques in DNA sequencing to better understand the evolution of this diverse group of plants. We have recently discovered that there may be genes restricted to these mosses that are not found in any other plant group, and we will be validating and following up on these results in 2014 (Wickett, Johnson, and outside collaborators).