As the light of summer fades, a delicate charmer beams from the Garden's shadows.

Small, orchidlike flowers, speckled with white and shades of purple, sparkle above tall stems of glossy green foliage. Most other perennials have finished blooming. Trees are going dormant and preparing to drop their leaves. But this beauty is just getting started.

The only thing that isn't lovely about this plant is its name: the toad lily.

You can see why the mottled coloration of the flowers might remind some unpoetic soul of a toad. And like toads, these plants prefer shady, moist places. But they have far more charisma.

Toad lilies (members of the genus Tricyrtis) are hardy perennials native to ravines and woodland edges in India, China, Japan, and other parts of Asia. In nature they grow amid tall grass, but in the garden they form well-behaved clumps, largely untroubled by disease or pests.

They can be found beginning to bloom in about mid-September in the English Walled Garden.

In 2001, Richard Hawke, manager of Plant Evaluation at the Garden, reported on a ten-year study of 24 kinds of Tricyrtis, writing that "uncommon beauty, late-season blooms and adaptability to shade give the toad lilies exceptional garden merit."

The top performer in that study was Tricyrtis formosana, which has abundant purple-and-white blooms held high on 36- to 40-inch stalks. Another good species was the shorter Tricyrtis hirta.

At the time, toad lilies were not well known among gardeners. But in recent years they have become easier to find in garden centers and a number of cultivars are available. Most begin blooming in September or October, depending on the cultivar and the weather, and keep it up for three or four weeks or until they are wilted by frost.

Toad lilies need soil that is rich in organic matter, part- to full shade and consistent moisture, according to Boyce Tankersley, director of Living Plant Documentation. "Those soils can't be saturated like a bog, but they have to be kept moist," he says.

The plants need no staking or deadheading. In good, light, organically rich soil, they need no fertilizing. A layer of mulch will help keep the soil steadily moist, although it should not be piled against the stems. Toad lilies are easy to multiply by division: A clump can be split in spring and be ready to bloom by late summer.

These plants do have one flaw, at least from a gardener's point of view: deer and rabbits find them tasty, according to Tankersley. "I plant mine in amongst the hostas so the deer eat the hostas before they get to the tricyrtis," he says.

All the shade standards are good companions for toad lilies: hostas, ferns, Solomon's seal, sedges, brunnera, and lungwort. Or plant them among spring bulbs and ephemeral wildflowers such as Virginia bluebells. As the spring bloomers' foliage goes dormant, the toad lilies' stately stems will take over.

Color is all around in the Garden in September: crocuslike pink colchicum, New England asters in pinks and blues, golden waving grasses, purple callicarpa berries, the first tree foliage tinted with yellow and red. But toad lilies are the stars of the shade.

They are particularly engaging by a path or sidewalk where you pass them every day. As the days grow short and the shade deepens, their undaunted bloom keeps spirits bright.

All the shade standards are good companions for toad lilies. 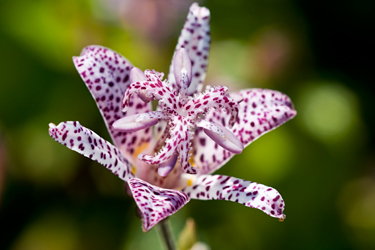 The blooms of Tricyrtis formosana grace the top of the stalk, unlike other cultivars, whose blooms extend down the stem.