Advice from our horticulturist when the Rose Garden turned 30

"Be brave."
Tom Soulsby says it's the best advice he has for rose gardeners.

As the senior horticulturist at the Rose Garden—which celebrated its 30th anniversary in 2015—Tom knows how to deal with roses at every stage of their lives: young and old, tended and in need of pruning, healthy and not. For this month's Smart Gardener, we asked him to address a common issue that every gardener eventually faces—tending to overgrown roses. 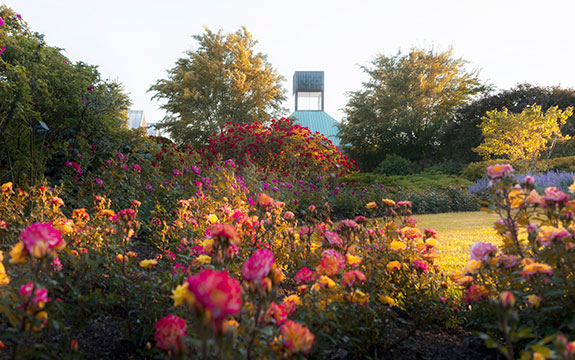 Dedicated in 1985, the Krasberg Rose Garden's 5,000 roses have filled in the beds, trellises, and arbor nicely over the years. Some of the original selections are still represented in the garden: 'Golden Wings' and 'John S. Armstrong' are as beloved now as then. 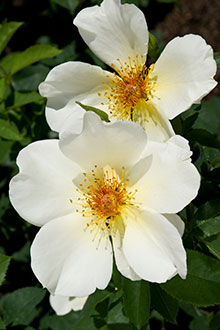 Before you grab the loppers, give your plant a long, hard look from the bottom up. All roses, young and old, want to be open at ground level—the better to get a good dose of sunshine. An overgrown rose is thick and congested at ground level, which results in lots of fuzzy tip growth instead of full, lush canes covered in buds.

Check for dead or damaged canes (you'll prune those out first) and for signs of disease or pests. Next, look for the old and thick canes that will be second on your "prune list." While it may seem counterintuitive to prune the thickest growth, think of it from the plant's point of view: it takes a lot of energy to support an old cane, which therefore won't produce as many flowers. The canes with the potential to produce the most roses will be young, new shoots.

Our most frequently asked rose question ("My rose only bloomed once. How do I get it to bloom again?") has its origin in the fact that there are two basic kinds of roses: one-time bloomers and repeat bloomers, called remontant. While many modern hybrids bloom at least twice a year (and some nearly constantly from May through September), some of the most beautiful, "old garden," heirloom roses bloom just once, usually in late spring/early summer.

Don't be shy about pruning overgrown roses—they can take it! 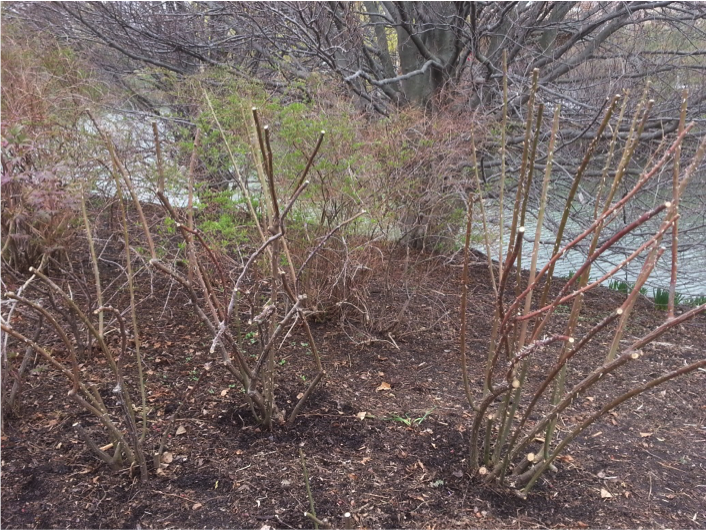 This pruning may seem aggressive, but these roses will be healthier and produce more blooms.

Do you have a one-time bloomer? Consider it a positive, since you can't change the plant's DNA. Once-flowering roses can be the first to flower, in early summer. Often large shrub varieties, some are now hard-to-find heirlooms—you may have the only rose of its type in your neighborhood. If so, show it off to best advantage in the garden, surrounded with remontant varieties that will finish out the summer.

At our Rose Garden, heirloom roses line the back path behind the arbor. This "old garden" section is stunning in May and June, as the air is heavy with the scent of 'Robin Hood' and 'Comte de Chambord'.

Now assemble your tools: bypass pruners and loppers, plus a garden saw. Make sure tools are sharp—clean cuts are important to the health of your rosebushes, as torn tissues can be vectors for disease or insects.

Pruning grandma's old roses or the climber that's covered the arbor for years is a scary proposition. This is where "be brave" comes in. "An otherwise healthy rose won't die because you pruned it," Tom reassures. "A lot of old roses tolerate aggressive pruning well."

After pruning out dead wood and the thickest canes, assess the overall remaining shape. You're looking for an open center with canes that arch out. Prune out canes that cross through the center. Finally, cut back the remaining canes to one to two feet from the ground. While the first year will be a recovery year for growth, a "hard" pruning typically stimulates plenty of flowers in successive years.

"Brave" doesn't have to mean all at once. Tom suggests that a strategy of "ongoing maintenance—a little at a time" works wonders for roses. "Ultimately, pruning is about controlling growth while keeping plants productive," he counsels.

The Rose Garden has already started to power up for the season. It's a smart time to stop by and investigate the pruning work that Tom and his crew have done, and to stop and smell the earliest-blooming roses!

Karen Zaworski was a writer, photographer, and passionate gardener in Oak Park, Illinois. 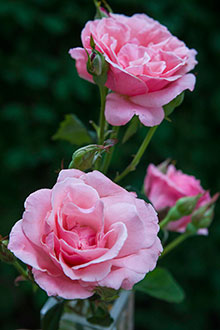 It may bloom just once each year, but Rosa 'Queen Elizabeth' is well worth the wait. "Don't deadhead once-flowering roses," horticulturist Tom Soulsby says, "since they often have the best rose hips, gorgeous in fall." 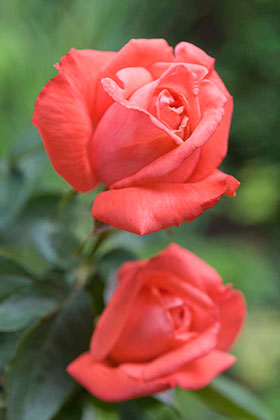 A favorite "original" variety from 1985, Tropicana™ (Rosa 'Tanorstar') has the lush shape and vibrant color that continues to attract new fans 30 years later.

Tom Soulsby not only tends the Rose Garden, but also teaches classes like The Thorny Side of Roses: Pests and Diseases.