Wildlife in the Garden: Protecting your Plants

Along with all the joys that come with spring—daffodils, magnolia blossoms, blue skies, and warm sunshine—are the four-legged critters that irk gardeners. Take your pick: squirrels, chipmunks, rabbits, woodchucks, meadow voles, and deer. You may not have all of them in your garden, but even one or two in search of a meal may eye your plants throughout the year.

“We’re finding a lot of what we call ‘spring surprises,’” says Tom Tiddens, the Garden’s supervisor of plant health care. “We’re seeing meadow vole and rabbit damage to woody plants. In the winter, when they can’t find sources of food, they’ll chew the outer bark completely off.”

When the animals remove a strip of bark around an entire small tree trunk or a branch (called girdling), it can kill the plant—at least above the girdled area. Although rabbits tend to prefer certain plants like cotoneaster, fruit trees, and roses, Tiddens discovered that they stripped the bark off young lilacs in a new planting bed over the winter. Now, it’s “wait and see” to determine whether the plants can recover.

“There’s not a lot you can do at this point but make a note for fall to protect the plants. For now, it’s scout and monitor your garden once or twice a week.”

Tiddens is taking preventive measures before critters can damage the Garden’s new spring plantings. “We use a lot of different repellents. The key is to apply them before you get the first hit.”

Spray and granular repellent products for homeowners generally include capsaicin (an ingredient found in hot peppers), along with putrified eggs and garlic. Other products feature dried blood meal as a deterrent. Some products contain wax to help the ingredients stick to leaves, flowers, and stems. Others must be reapplied after a rain and when new growth appears.

Timing is critical when using animal repellents. Pansies are among the annuals that deer will demolish. “I like to get the plants sprayed right away and not even let them go one night. If deer find a plant they like, they sometimes won’t be bothered once its sprayed and they’ll come back for more.” Spray the plants as soon as they’re in the ground and the deer will be less likely to bother them. 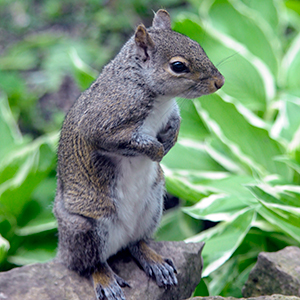 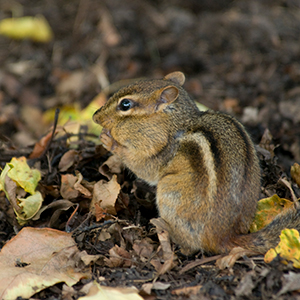 The cute but destructive dynamic duo—squirrels and chipmunks wreak havoc in the garden.

Diggers in the Garden

Chipmunks may amuse us with their antics, but they can do considerable structural damage to house foundations, paths, and driveways. They dig tunnels under shrubs and trees, flower beds, rocks and woodpiles, stone walls, sidewalks, porches and decks. They generally have one central entrance to their burrow, but their tunnels can be 20 to 30 feet long. “They’re tough,” Tiddens says. “I like to fill in the holes leading to their tunnels with small gravel.”

You can encourage chipmunks to relocate by placing a little piece of ammonia-soaked rag at a tunnel entrance. The irritating ammonia smell lasts about a week before the rag must be soaked again.

Like squirrels and mice, chipmunks are attracted to bird seed. Clean up spilled seed below the feeders. Avoid using poisons to control pesky chipmunks. Fox, coyotes, and hawks are their natural predators and they can be harmed by eating a chipmunk that has ingested poison bait.

Fencing is a great deterrent to deer, rabbits, and woodchucks. “I don’t think any gardener in our area should have a vegetable garden without a fence,” Tiddens says. He learned that in his vegetable garden at home. “Between the woodchucks and the rabbits, I had very little left. I put up the fence quickly.” 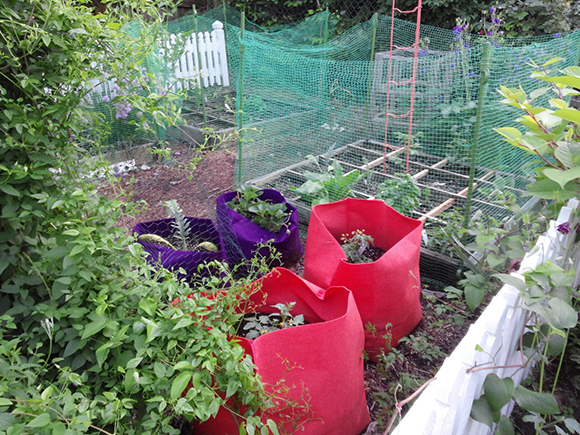 Choose a fencing material with small holes, and bury fencing 6 to 8 inches below the soil to deter digging under the border.

“It is a good idea to protect small plants with fences early on just to get them established,” Tiddens says. Deer are especially fond of yews and hostas, and the bucks will browse new growth on crabapples and fruit trees.

To deter deer during the growing season, vials of coyote urine were hung around the perimeter of the Garden. But even a few strands of suspended wire, twine or fishing line may deter a wandering deer. “By the shoreline, around the perimeter, we put in a few metal, T-shaped posts and ran three rows of black string between them. When deer bump into the string, the hope is that they will turn around.”

The Garden also raised the fence height from 6 to 8 feet tall.  “We had a lot of deer jumping the 6-foot fence, but deer can jump that pretty easily. They’re suburban deer and they’re not afraid of anybody.”

Preparing for winter plant protection begins in late August when barriers are put in place. “We wrap snow fencing around the trunk of young, smooth-barked trees to protect them from deer rubbing against the bark,” Tiddens said. Male deer typically begin rubbing their antlers in September to remove the velvety growth. In November and December, they rub their antlers on young tree trunks to mark their territory. By March, the winter plant barriers are removed.

Two technicians scout and monitor the plantings every morning and report back to Tiddens. “If there are any problems, I want to be ready to take action right away.”  That happened earlier this spring when they noticed that some emerging tulips were damaged.

“It can be frustrating,” Tiddens says. “Normally, we get a nice ground freeze in winter, but with the mild weather we had beds of tulips that were devoured by squirrels.”  When planting bulbs this fall, he recommends setting them at the proper depth—not too shallow, removing any bulb remnants left on the soil, and mulching the bed after planting. “You have to work with Mother Nature.”

Check out these resources for information on deer-resistant plants, voles, and preventing animal damage.