A smart gardener's secret ingredient at the holidays 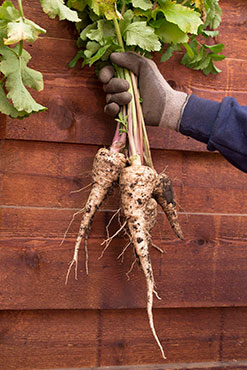 Vegetables fall in and out of favor over time. Fifty years ago, iceberg was often the only lettuce found at grocery stores, along with two "kinds" of peppers—red and green. Rediscovered today, heirloom lettuce varieties are avidly discussed by chefs and shoppers alike, and the world's thousands of pepper varieties are making their way into everything from cocktails to chocolates.

It's been awhile since parsnips have enjoyed that kind of popularity.

In this month's Smart Gardener, we shine the spotlight on this old-fashioned but tasty vegetable that deserves more space in Chicago-area gardens.

History records the common parsnip, Pastinaca sativa, as popular in ancient Roman times, as an important food and medicine in Europe during the Middle Ages, and as being grown by settlers in early Jamestown, Virginia, here in the young colonies. Thomas Jefferson planted parsnips at Monticello. Weedy and wild, the common parsnip was probably improved upon in Germany or Italy, but it wasn't until the 1800s that predictably long, smooth, hefty versions were bred and popularized.

Parsnips from the past

'Hollow Crown' is a venerable variety, known before 1825, that's still available today. (Heirloom seed companies like Baker Creek may offer it.) Like most parsnips, it has a long, carrot-like shape (parsnips and carrots belong to the same family, Apiaceae); its name refers to the variety's characteristic dip at the shoulders, an indented crown.

'The Student' debuted in England in 1859, meeting with wild popularity. If the loose, loamy soil that parsnips prefer is exceptionally deep, this parsnip can reach 36 inches in length! Notably sweet—some say the sweetest of all—'The Student' is also said to be redolent of lavender. British seed company Thompson & Morgan is one source for its seed.

'Tender and True' dates back to 1897 and sports wide shoulders and strong flavor. Also available through Thompson & Morgan, this parsnip is an award winner at Britain's Royal Horticultural Society.

With such a good start, why didn't parsnips continue on the road to popularity? One word:potato.

Quicker to harvest and endlessly versatile, the Irish potato became the starch-du-jour in the nineteenth century…and parsnips declined in popularity.

Sweet! What we'll be harvesting soon: 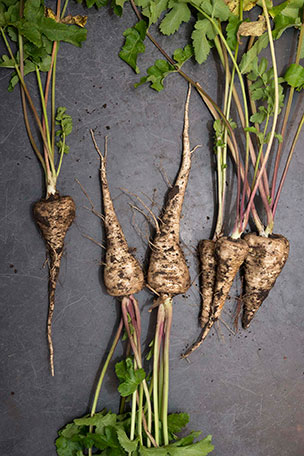 At the Regenstein Fruit & Vegetable Garden, we experimented with parsnips in 2013 and had such a fine crop of 'Albion' (see here for our blog post about it) that we added two more varieties this year.

'Albion', like most parsnips, is disease- and pest-free, and also resistant to the cankers that can affect some other varieties.

'Lancer' has the uniformity that other parsnips aspire to, plus a reputation for an exceptional nutty-sweet taste.

'Half-long Guernsey' looks more like a wedge than a carrot, and, for heirloom buffs, was the most popular variety of the 1800s. Sow the seeds thickly—in our beds, germination was spotty for this variety.

Why talk about parsnips now? Because November/December is harvest time in our area, so parsnips will be showing up in groceries and late farmers' markets now. Winter is a great time to experiment with parsnips in the kitchen and, if you fall for them, to order seeds for early planting next spring.

That's how one writer describes the long wait for parsnips after sowing. Germination can be slow—for some varieties, up to three weeks! Parsnips want warm soil to get started, yet their 120-day growing period (before cold sets in) demands that gardeners in our area get seeds into the ground early.

Parsnips and your holiday menu

Ready to experiment with parsnips in the kitchen? Their sweet, nutty, spicy flavor is a revelation to the uninitiated. A few ideas on preparation:

How to sweeten a parsnip

Parsnips need cold weather in order for the starches they contain to turn to sugars.

That's accomplished simply by leaving them in the ground for a few frosts…or even overwintering them and harvesting the following spring. (Yes, they can survive the freeze-and-thaw cycle, whereas their cousin, the carrot, cannot.) How much sweeter do they get? Overwintered, they're three times sweeter than those harvested in fall.

That means that you can harvest parsnips in November…December…and even later if the ground thaws. It also means that parsnips can spend nearly a year in the ground—and thus need a row or patch dedicated just for them. 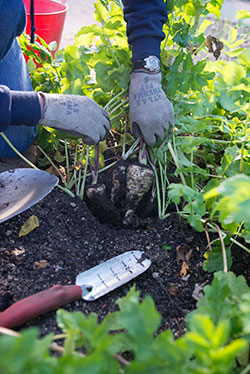 Harvest parsnips when you want—the soil is your outdoor refrigerator.