Insect Pests: Is something bugging your garden?

As summer rolls along, we often have periods of hot weather and little rain. Without adequate water, plants can suffer from drought stress and stressed plants are an invitation to insects. Spider mites, flea beetles, Japanese beetles, squash borers, aphids, several types of caterpillars, and other flying and crawling critters can chew leaves until they look like lacy Swiss cheese.

But not all insects are harmful. Lady beetles, also called ladybugs and ladybird beetles, lacewings, ground beetles, praying mantis, predatory flies and tiny wasps, and many others are beneficial—they prey on harmful insects. Alongside the Regenstein Fruit & Vegetable Garden you’ll find a special strip of plants—a pollinator strip. The plants attract bees and other “beneficials” that help control insect pests that can damage edibles. Planting native perennials will also attract beneficial insects.

Although it may be tempting to eliminate bugs with an insecticidal soap spray or other products, you could be wiping out lady beetle larvae if you don’t recognize the insects. You might spot a few caterpillars munching on dill, fennel, or parsley. They will eventually become swallowtail butterflies. Head over to the Lenhardt Library or the Garden’s Gift Shop and check out some of the many insect identification books. A good bug I.D. book is a great tool for the gardener.

Each morning, two of the Garden’s plant healthcare technicians scout for insect damage and disease and report back to Tom Tiddens, plant healthcare supervisor. Before you reach for a pesticide, “Give Mother Nature a chance to clean things up,” he says. That’s important because the population of insect predators tends to increase along with the “bad” bug population—predation is an important (and free) control for your garden, too.

Spider mites are a common pest this time of year. The tiny, wingless creatures can be found on many annuals, perennials, shrubs, and trees where they suck the fluids from leaves. Mites are extremely small and difficult to see without a hand lens or magnifying class. You’ll know they’re present if you see pale, flecked leaves that are stippled (with numerous small dots or specks) or have a bronzy sheen. Another telltale sign is a fine network of webs that covers stems and leaves.

Mites have many natural enemies such as lady beetles, lacewings, and predatory mites. Keep plants well watered and they can withstand a mite feast. A summer downpour or a forceful spray from a hose will knock them off the plants. Chemical controls should be used only as a last resort because they will kill predators as well as the spider mites. 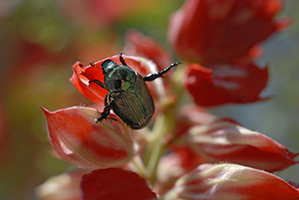 These metallic green insects emerge from the ground in July and for the next four to six weeks will feed on more than 300 types of plants. Clusters of beetles with voracious appetites can do extensive damage, causing the chewed leaves and petals to eventually fall from the plant. The simplest and cheapest way to control the beetles is to knock them into a bucket of soapy water. A good time to do this is in the early morning when the beetles are slow to move. 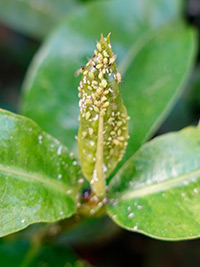 Another common garden pest, the aphid is a small, soft-bodied insects that feeds on plant sap. Aphids can appear at any time during the growing season and reproduce quickly and often. They are easy to spot when they cluster in large numbers. They prefer new succulent shoots, buds, and leaves.

Aphid-infested leaves and stems often become yellow, distorted, or curled. Heavy aphid infestations slowly weaken a plant and can cause stunted and distorted growth. Some aphids excrete "honeydew," a sugary substance that coats the leaves, attracts ants, and causes the growth of sooty mold, an unsightly but harmless black fungus.

Knock aphids off the plant with a spray from the hose. They also can be controlled with insecticidal soap, which must be sprayed directly on the insects to be effective. As with all products, carefully follow the label information for safety and use. Even “organic” or “natural” products can be misused. 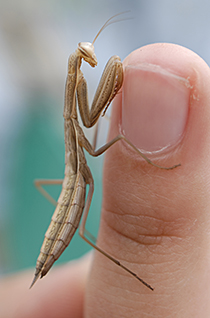 Mantids (sometimes called praying mantis) are beneficial insects that prey on a wide variety of pests. They blend in well with their surroundings and often look like leaves or sticks. They get their name from the way they hold their front legs together as if in prayer. In the fall, the females deposit their eggs in a mass of foam that hardens into an egg case and looks like a tiny beehive. The egg case overwinters on the stems of ornamental grasses and woody plants. Each case holds up to 400 mantids that emerge in June. They are among the most effective bug-eating machines for the garden.

If you wish to submit insects for identification to Plant Information, complete this inquiry form.

Note where the insect was collected, the plant on which it was found, and whether it was indoors, outdoors, etc. Submit your specimen in a crush-proof container, preferably one that’s clear and can be sealed.