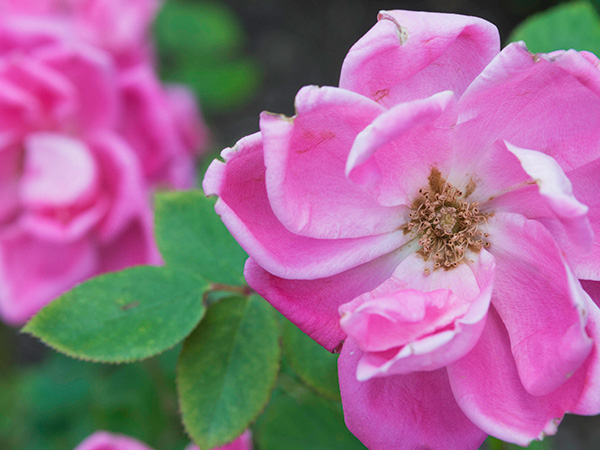 When the rosarian William Radler was a teenager, he resolved to breed a hardy rose that was beautiful, bloomed all season, was disease resistant, and maintained an attractive shrublike habit. He remains committed to breeding the "high-maintenance" issues out of his roses.

He succeeded with his first introduction, Knock Out™, the award-winning shrub rose that mail-order catalogs call "perhaps the best-ever landscape rose for four-season interest." Mr. Radler germinated the first Knock Out seed in his basement during the winter of 1988–89, and that spring he planted the small shrub outside in his garden. The following 11 years were spent overseeing bud grafting, testing, and production of more stock. The rose was offered to the All America Rose Selections committee and declared a winner in 1997. Knock Out became available to the public with 250,000 plants in production. And a star was born.

Knock Out is a four-season winner that will endear itself to gardeners eager for the beauty and versatility of rosebushes but unwilling to spend extra hours nurturing "marginal" plants. This compact, 3-foot by 3-foot shrub rose blooms constantly until hard frost with multiple bright cherry red flowers that require no deadheading. The large, shapely leaves are a burgundy-tinged deep green that darkens with cool weather. Orange rose hips arrive later, providing a final display. This plant is tough, crown-hardy to minus 20 degrees Fahrenheit, and resistant to black spot, the foliar scourge of roses.

Radler offers a few basic tips for gardeners anxious to grow Knock Out or other landscape roses. When planting bare root in April, or from a container later on, make sure the graft union is planted 1 to 2 inches below soil level. This helps preserve its cold hardiness. Broadcast a slow-release granular fertilizer, high in nitrogen but with little, if any, phosphorus and potassium (there are sufficient amounts of those elements in the region’s soils). Knock Out is quite drought tolerant but should be watered amply its first year. Mulch the planting area with several inches of shredded hardwood. This is visually appealing, conserves soil moisture, deters weeds, and provides insulation against cold. Additional winter protection is not required.

When forsythia blooms the following April, prune any dead wood and fertilize again. In future years, if necessary, prune the shrub hard to the ground to maintain its compact form. Look for the stunning Knock Out roses blooming this June in the Rose Garden.