From Prairie to Garden 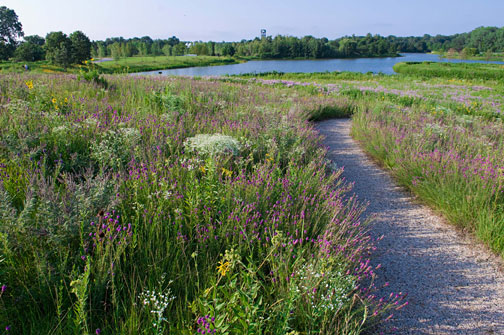 Take a late-summer stroll through the Dixon Prairie and see golden grasses sparkling like jewels with touches of color, and the lake rippling marvelously in the wind.

The black-eyed Susan and coneflower plants you spot here may seem sparse, lanky, and scattered unlike the neat clumps or broad sweeps that can be seen on Evening Island and, perhaps, in your garden.

Over the last few decades, plants once native to midwestern prairies have been welcomed into gardens. But in our front yards, they often don't look much like they did in the prairie.

When we grow prairie species in the garden, even in the same extreme and unpredictable climate, they are living in altered conditions from the ones in which they evolved. Prairie plants behave differently in our gardens for a number of reasons, according to Joan O'Shaughnessy, the Garden's prairie and river ecologist.

The Dixon Prairie, which wraps around the south and west sides of the Garden, has been reconstructed to include six types of native northeastern Illinois habitat, with plants that fit in those niches, growing the way they naturally do.

When you see black-eyed Susan (Rudbeckia hirta) here, for example, it appears as a stray sunny face, but rarely as the kind of bright bushy clump we are accustomed to seeing in manicured gardens.

In the prairie, black-eyed Susan has much more competition from other plants for water and nutrients, O'Shaughnessy says. It grows in much leaner soil that doesn't push it to create leaves and flowers. In the prairie, densely surrounded by grasses, it must grow tall and slender to reach up to the sun — and it gets all the support it needs from surrounding plants.

Today, many gardeners try to fix the altered soil by fertilizing and digging in manure, compost, and other organic matter that makes it far more nutrient-rich than the original prairie. We water the lawn and spray the bugs. We grow plants in isolated clumps, not mixed in with companions and competitors.

We tend to like our plants compact and well-behaved and we like to see a big punch of color. So plant growers often select shorter, bushier examples of species such as Showy black-eyed Susan (Rudbeckia fulgida var. sullivantii) and propagate them as cultivars to appeal to gardeners. They also create hybrids from several native species that have qualities that work in gardens, though not in prairies.

Black-eyed Susan is a good candidate for gardens, O'Shaughnessy says, because it is a "pioneer plant" — short-lived, but opportunistic and able to grow in a wide variety of habitats and take hold in disturbed soil. No soil is disturbed as much as that of the average perennial garden.

It's crucial when choosing native plants for our gardens to select those that will thrive in our gardens as they are today. "Right plant, right place" applies as much to native plants as it does to imported perennials. Just because a plant may have grown in a particular spot in 1830 does not mean it will thrive in a garden at that location now if the conditions have been drastically altered.

At the same time, it's important to choose natives that will support native insects, birds and microorganisms. That's one reason ecologists stress buying plants that are locally grown from seed that evolved in the vicinity. Strains of the same species from elsewhere have not co-evolved in the same relationship with local animals, which may depend more and more on our gardens for food and breeding places as their native habitat is degraded by development and climate change.

Does that mean you shouldn't use cultivars of native species, such as the array of Echinacea hybrids developed at the Garden by Jim Ault? Not at all. If you can make a native bee or butterfly happy with the nectar from a hybrid, it's worth planting. But if you have a suitable spot for it, consider using the straight, wild species of a native plant, such as soft and golden prairie dropseed grass (Sporobolus heterolepis) or vivid-orange butterfly weed (Asclepias tuberosa). Many living things will be grateful for that little scrap of the vanished Chicago-area world.

Black-eyed Susan is a good candidate for gardens, O'Shaughnessy says, because it is a "pioneer plant". 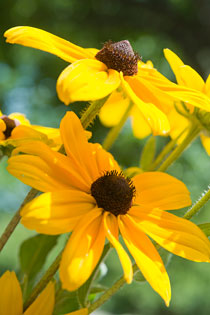 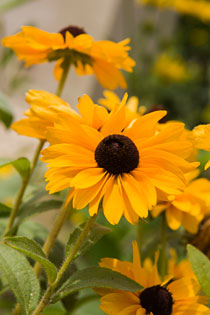 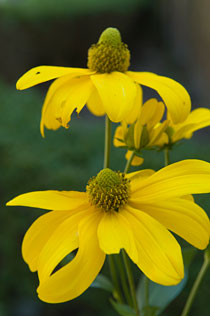