In Greek mythology, Iris is the Goddess of the Rainbow. She’s a messenger from the gods to mortals—a golden-winged goddess who travels to earth on a rainbow. When she arrives, colorful flowering plants—irises—sprout where her feet touch the ground. The genus Iris is a fitting name for a group of fabulous plants whose flowers represent a rainbow of hues.

There are about 300 iris species and thousands of cultivars. Their native habitat ranges from North America, Europe, Africa, and Asia where some grow on mountain tops, in meadows, deserts, alongside streams, and on hillsides. Depending on the species, they range in height from a few inches tall to several feet. 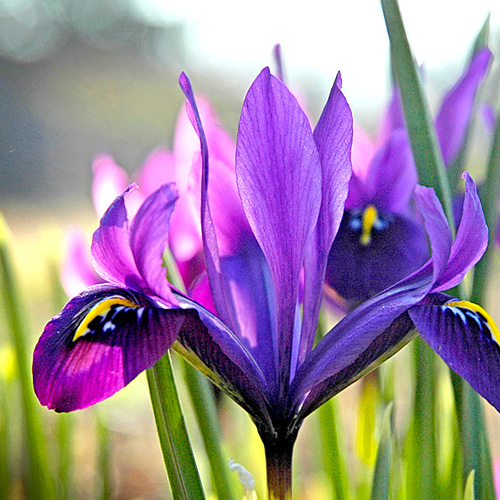 Iris blossoms are represented in emblems, such as the ‘fleur de lis’ of French kings, and on many flags. Irises appear in paintings by Vincent van Gogh, Claude Monet, and countless other modern artists. One of the oldest depictions of the plants are at the Palace of Minos at Knossos on Crete, painted nearly 4,000 years ago.

The flowers are easy to recognize. They have three upright petals called “standards” and three downward-facing sepals called “falls.” Flowers may be less than an inch wide to more than 7 inches across. Bloom time depends on the variety with some plants flowering in March and April and others blooming from May through mid-June. 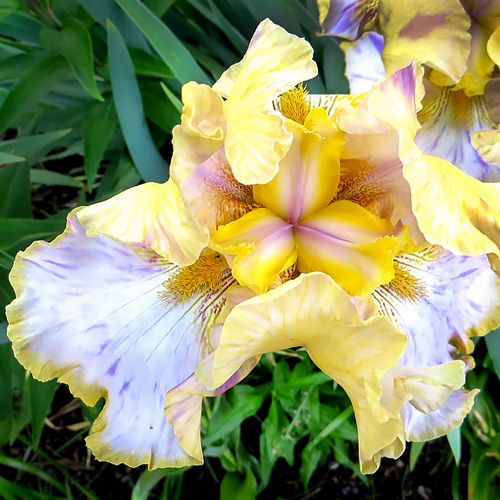 Bearded Iris (I. germanica)
Few perennials offer the wide range of colors found in bearded irises. The common name is a nod to the thick “beards”—a fuzzy-looking midsection that appears on the falls of each flower. Breeders have created tens of thousands of bearded iris cultivars with a stunning range of flower colors and flowers that span from 4 to 7 inches wide. Plants range in size from miniature (8 inches tall) to more than 3 feet tall. The miniatures tend to bloom at the same time as late daffodils. Taller plants may need staking when the buds have formed. 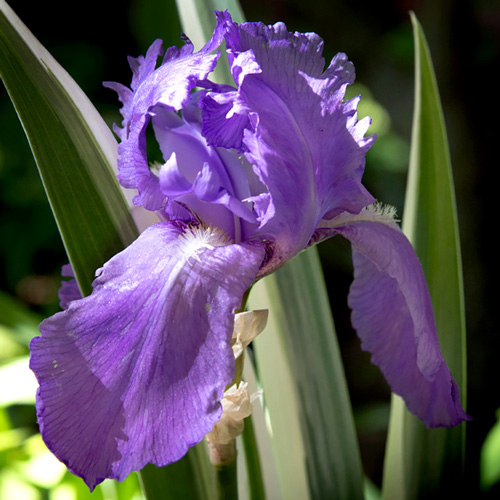 Sweet Iris (I. pallida)
This old-fashioned iris has gray-green leaves that reach 24 inches long. The flowers are fragrant and blue-purple. The variegated cultivars offer leaves with creamy yellow and blue-green stripes. Classic lavender-blue flowers top the plants in late spring. 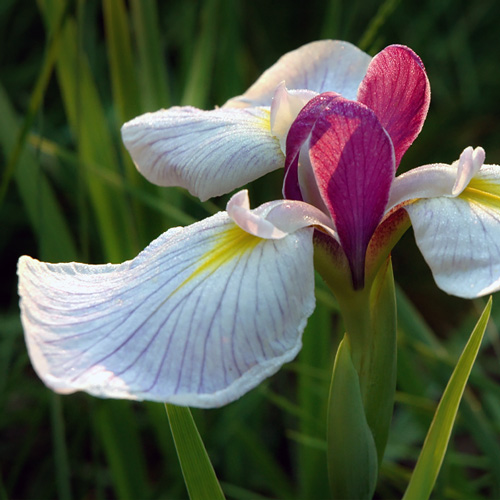 Siberian Iris (I. sibirica)
These moisture-loving irises produce slender, spiky leaves and they are among the easiest of all perennials to grow. Delicate small flowers grace the tops of the plants and once they’re finished blooming, they produce attractive seed heads that can be left on the plant or cut for use in arrangements. Depending on the cultivar, plants range in height from 24 to 42 inches. Siberian iris typically blooms after the bearded iris. Flower colors may be white, yellow, lavender, purple, or multi-colored. 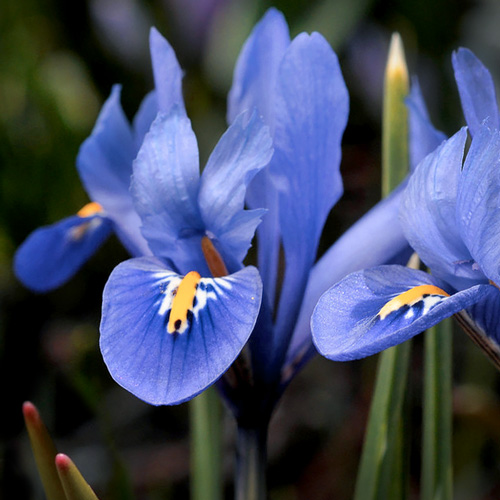 Reticulata Iris (I. reticulata)
One of the first signs of spring are the charming flowers on 6-inch-tall plants. They are best massed in sunny areas of rock gardens, along the front of a border with dwarf daffodils, next to paths or alongside streams or ponds. 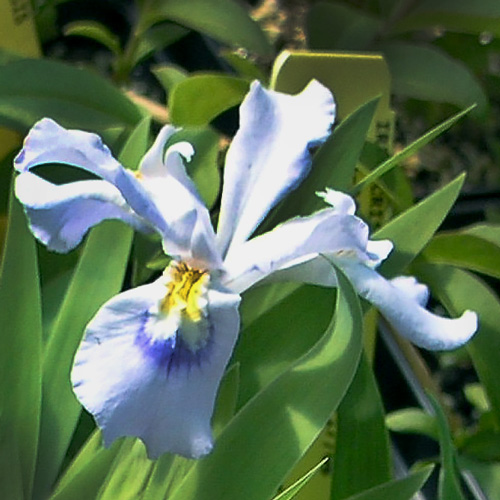 Crested Iris (I. cristata)
This native iris is a low-growing, rapidly spreading plant that works as a ground cover. It grows 3 to 6 inches tall and produces underground stems that spread horizontally and shallowly. Crested iris grows best in part shade, but it can adapt to full sun as long as the water supply is adequate. It features pale blue, lilac, or lavender flowers with gold crests on the falls. Iris cristata ‘Alba’ is a white-flowered variation that occurs in wild populations. 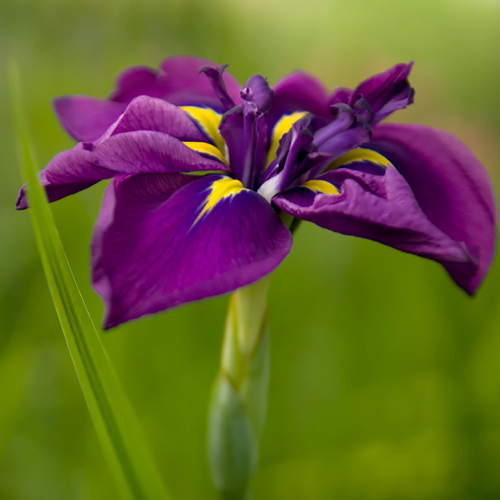 Japanese Iris (I. ensata)
In their native habitat, Japanese irises grow in very moist settings or in shallow water. However, they can be grown in consistently moist, humus-rich garden soil, especially if it is slightly acidic. The trick is not allowing the soil to dry out. Wet in the spring and moist in the summer is a good rule for this species, which blooms about a month after bearded iris. The flowers may be at least 6 inches wide in colors that range from white to blue, purple, red-purple and lavender-pink. 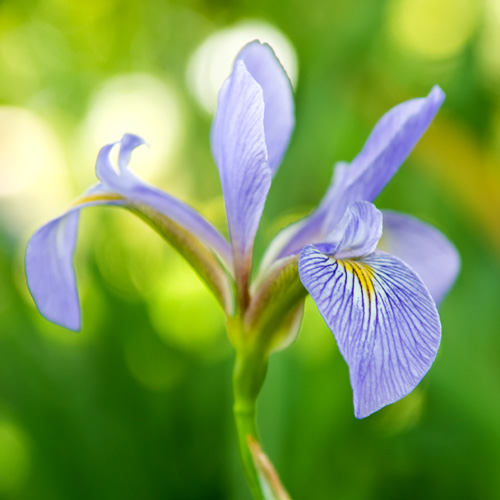 Irises bring a glorious punch of color and vertical accents to the spring garden. They make great partners with peonies, perennial geraniums, columbines, forget-me-nots and poppies. Moisture-loving Japanese irises pair well with ferns and astilbe. Crested iris is an excellent plant for early spring bloom in a shaded area of the rock garden, perennial border, or woodland garden. The foliage forms a nice ground cover for woodland areas. The big, beefy blooms of bearded irises rise above poppies and ornamental onions and provide contrasting foliage to Baptisia cultivars.

Irises benefit from fertilizing twice during the growing season. For existing plants, the first application of all-purpose fertilizer is about six to eight weeks prior to flowering, which for much of Illinois is between mid-March and mid-April. The second application is after transplanting or, for any existing clumps not being dug, in mid-summer.

Like many other perennials, irises benefit from dividing every three to five years. Otherwise, clumps become crowded and flowering diminishes. Clumps of Siberian iris may produce a “doughnut hole”—the inside of the clump is bare soil and the leaves form a circle around it.

All rhizomatous iris species, such as the common bearded, beardless Siberian and Japanese iris, can be divided when they’re finished blooming up to late August. The rhizome is modified stem tissue that grows best at or just below the soil surface. Before dividing, cut the leaves to one-third of the plant's height. Use pruning shears, a saw or an old bread knife to cut away individual new rhizomes from the mother rhizome, which should be discarded.

Dig up the plant and replant young rhizomes that grow off older stems, leaving the foliage intact. Healthy rhizomes should be 5 to 7 inches long, with at least one good fan of leaves and two or more buds. Dig a hole 5 inches deep and place the rhizome on a small mound of soil with the roots pointing down. Cover with soil, allowing the rhizome to be slightly exposed so it does not rot.

When the plants have finished blooming, iris foliage—with its slender, spiky leaves—adds great texture to the garden. Siberian irises form graceful fountains of grass-like foliage that remain green and healthy until autumn.

Irises are susceptible to some pests, such as iris borer, and yellow flag iris (Iris pseudacorus) should not be planted as it is an invasive. Learn more about perennial gardening. Discover where to see the Garden’s many Iris cultivars. 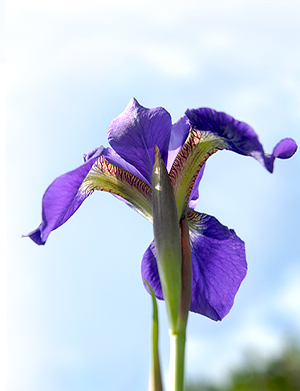