In a world awash with crocuses, daffodils, and early tulips, we can easily forget there are other bulbs in the world. But you'll always remember the first time you encounter a crown imperial (Fritillaria imperialis). On a stalk up to 3 feet tall, a flashy cluster of orange bells is surmounted by an odd-looking topknot of green leaves. As if Dr. Seuss had drawn it, the fritillary may be quirky, but it is certainly spectacular.

It's hard to grasp that this headline-grabber is related to the shy, charming checkered fritillary (Fritillaria meleagris), with its gingham-patterned nodding bells hugging the ground in moist, shady places.

Both are members of an often overlooked genus of bulbous plants that spans the globe. Stroll the Graham Bulb Garden in April or May, and you'll find both these oddly assorted cousins. You'll also spot clusters of bells on lemon-yellow Fritillaria pallidiflora and lime-green Fritillaria raddeana, which looks "like a mini-crown imperial," says Shannon Treonis, senior horticulturist.

The genus name Fritillaria comes from the Latin fritillus, meaning dice-box, apparently because the flowers of some species have geometric patterns of spots reminiscent of the dots on dice. The same reasoning gave us "fritillary" as the common name for some spotted butterflies.

The pattern is most obvious on the flowers of the checkered fritillary, a species widespread in Europe. Its wide bells, nodding just a few inches from the ground, have burgundy and pink checks, almost like the tablecloth in an Italian restaurant. You can also imagine a pattern of scales, which may be whyFritillaria meleagris is known to some as the snake's-head fritillary.

Fritillaria meleagris is the starter fritillary, according to Jill Selinger, manager of continuing education, who teaches the seven-week hardy bulb class every spring. Unlike many spring bulbs, the checkered fritillary is a little bit shade-tolerant and prefers well-amended, moist soils. Selinger likes it in a mixed planting, even a casual meadow. She has hers at the edge of a rain garden, fronting the taller prairie plants, mingling with the edge of the grass and thriving in the overflow from a sump pump.

These flowers are subtle and don't do well in masses, so you might consider planting them by a path where visitors can notice them and be charmed. If your path has a pitch to help water run off, plant them on the low side so they get the soaking after rain.

The crown imperial is as opposite to the checkered fritillary in its needs as it is in its looks. It requires full sun and "impeccable drainage," Selinger says, even more than most of our spring bulbs, which tend to come from gravelly, high places in the Mediterranean, the Middle East, and central Asia. Fritillaria imperialis has an odd bulb, with a sort of divot on the top from which the stem will grow and a spongy texture that makes it very susceptible to rotting if it sits in damp soil. Selinger suggests planting the bulb canted to its side so water doesn't collect in the divot.

One way to handle the demands of the crown imperial is to grow it in a container with an especially well-draining potting mix – maybe a combination of potting mix and sand or cactus mix. Imagine the hauteur of crown imperials in a tall pot.

Even with special care, though, Selinger says crown imperials are unlikely to bloom as well the second year. To get a good display she suggests adding a few bulbs to the clump every fall, or just considering the plant an annual for splashy display, like the more finicky hybrid tulips.

Some other Fritillaria species are more tolerant, given sun and good  drainage, like most other fall-planted spring-blooming bulbs. Fritillaria pallidiflora is quite hardy and robust, though it has an odor that takes getting used to. Fritillaria raddeana is only considered hardy to Zone 6, but it's reliable at the Chicago Botanic Garden in Glencoe. It might be one of those species that Chicago-area gardeners can experiment with, now that the new USDA map of hardiness zones shows us a half-zone warmer.

For those who like bright yellows and reds, the color scheme of some fritillarias is less accessible. Fritillaria persica has a stately presence, with 2- to 3-foot stalks lined with brownish-purple flowers, rather like an enormous but sedate grape hyacinth. Marginally hardy here, it needs well-drained soil in lots of sun.

Among Selinger's favorites are Fritillaria pudica, a western North American native that bears one or two nodding yellow bells, and Fritillaria acmopetala, which has flirty green flowers touched with burgundy. In a rock garden or other dry spot, consider Fritillaria michailovskyi, with clusters of yellow-skirted dark purple flowers on 8-inch stems.

Fritillaries are not found in every garden, and they aren't found in every home center or catalog either. But for a spring palette that goes beyond the ordinary, it's worth noting them in the photos you take and wish lists you compile during your spring walks so you can plan your fall planting. Seek them out at the Fall Bulb Festival or in catalogs and next spring's garden can be something special. 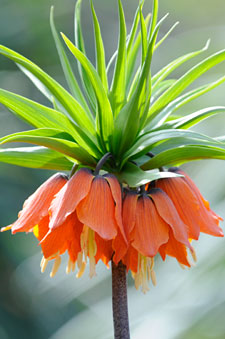 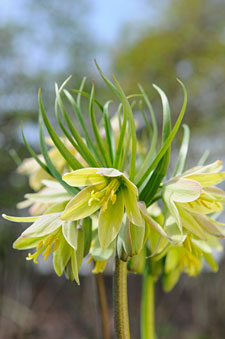 Unlike many spring bulbs, the checkered fritillary is a little bit shade tolerant, and prefers moist soils.