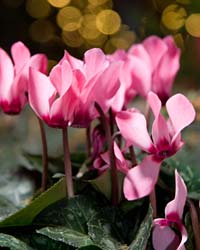 There is much cheer to be found in the dainty flutterings of a cyclamen. Such springlike blossoms uncurling during the unlikely months of winter speak of renewal and hope, while reminding us of the delicacies that will bloom in our own gardens a few months hence.

When cyclamen was named by the Greeks, they called on the word for circular, kyklos, referring to the shape of the tuber. Victorians believed the cyclamen spoke of diffidence or timidity. We twentieth-century gardeners focus more on the cyclamen’s ornamental value, glad for its resemblance to a flock of hovering butterflies and grateful for the heart-shaped foliage that lasts for months.

The many species of wild cyclamen growing throughout the Mediterranean area (and in some Chicago gardens as well) are not to be confused with the hybridized cultivars we find in retail shops. In the late 1800s, plant breeders in England and Holland began to cultivate the cyclamen parent, Cyclamen persicum, expressly for indoor use. Plants with the largest flowers, mostly pinks and purples, were crossbred. Advanced breeding today has expanded the range to red, salmon, magenta, and white, as well as splotched bicolors. Petals are frilled, folded, crested, doubled, and often fragrant. Foliage is an attractive mound, often with silver tracery on top and burgundy beneath.

To grow a cyclamen to its fullest potential, place it in bright, not direct, light in a cool room (50 to 60 degrees). Water the soil, taking care to keep water off the crown, and feed with a dilute fertilizer every two weeks from fall through bud set. Prune out dead flowers or stems and yellow foliage as soon as possible, and avoid sudden temperature changes, drafts, and misting — but maintain good humidity.

When the plant has finished flowering, try to bring it back into flower for next year. Reduce watering, maintain good light, and allow all the leaves to turn yellow, and the soil to dry out. Late in May, put the pot outdoors on its side in a shaded area and allow normal rainfall to water the tuber. In the fall, repot the cyclamen in a pot only 1 inch larger. Bring the developing plant indoors to a bright (and cool) spot, and begin watering and fertilizing. With luck and patience, your “poor man’s orchid” will speak to you once again of hearts and flowers.