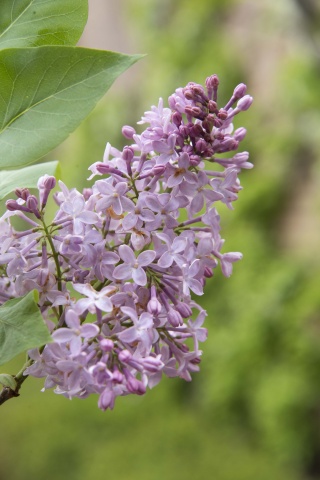 The appeal of the common lilac is due to the haunting fragrance of its usually abundant pale purple blooms. This multi-stemmed shrub has an irregular outline and can become leggy over time. Syringa vulgaris is the wild species from which all modern lilac cultivars are derived. Hybridization efforts have tended to focus on bloom color, fragrance, and overall habit of the plant. The species is native to rocky hillsides in the Balkan Peninsula of southeastern Europe.

Members of the genus Syringa, commonly known as lilacs, are shrubs or small trees prized for their showy and fragrant blooms in late spring. The individual flowers are tubular in form and are borne in large panicles. While the common name of the plant has come to define a shade of pale purple, some species and hybrids have pink or white blossoms. Lilacs begin to set buds for the following year shortly after they finish blooming; if pruning is desired, it should be done immediately after flowering to maintain flower production the next year.

Lilacs are native to cooler temperate areas of southeastern Europe and eastern Asia with winter temperatures below freezing; there are no lilacs native to North America. The genus includes at least 12 species and numerous hybrids and cultivars. The Chicago Botanic Garden's collection contains over 50 varieties of lilac and more than 800 plants.