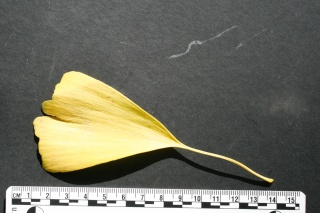 The Saratoga Ginkgo, introduced by the Saratoga Horticultural Foundation, Inc. in San Martin, California, is a male clone that will not produce the distinctive smelly fruit. It has unusually large and pendulous leaves. The leaves are deeply divided, elongated, and resemble a fish-tail palm leaf. These unusual leaves give an overall lacy appearance to the foliage. Saratoga Ginkgo has symmetrical branching and matures into full, dense, pyramidal form. It is slightly smaller than other selections, but not a dwarf. It is about one-half to two-thirds the size of the Autumn Gold Ginkgo. Saratoga Ginkgo has the typical outstanding golden fall color shared by all Ginkgoes and works well as a specimen or street tree. It is one of the most pollution-tolerant trees and works well in the city. The Ginkgo is an ancient deciduous conifer and evidence has been found which shows this tree coexisted with the dinosaurs. Ginkgo is sometimes called the maidenhair tree due to its beautiful fan shaped leaves that resemble a maidenhair fern frond.