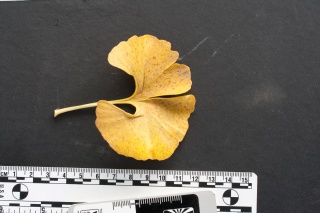 'Mariken' is a dwarf Ginkgo form. Its leaf size is in proportion to its size, making it appropriate for a bonsai or container. It is a male clone, which will not produce the distinctive smelly fruit, and will mature to small 3 foot by 8 foot spreading, shrub like tree. 'Mariken' won the American Conifer Society's 2010 Conifer of Year. The Ginkgo is an ancient deciduous conifer and evidence has been found which shows this tree coexisted with the dinosaurs. Ginkgo is sometimes called the maidenhair tree due to its beautiful fan shaped leaves that resemble a maidenhair fern frond. It is one of the most pollution-tolerant trees and works well in the city. Insignificant green flowers appear in the spring. Ginkgo has wonderful yellow fall color. It produces stout spurs along the branches; these spurs and the stiff branches give the ginkgo a formal, stiff, spiky appearance in winter. Golden yellow fall color is outstanding.