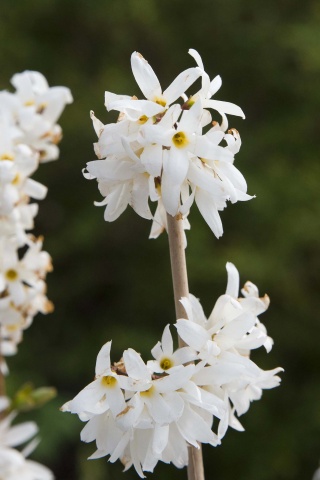 Abeliophyllum distichum, commonly known as white forsythia or Korean abelialeaf, is a rare and endangered shrub native to Korea that features white-to-pink fragrant flowers in very early spring. Growth requirements and landscape uses are similar to forsythia, and indeed, other than the color of the flowers, the two genera share a number of characteristics. First described in Korean scientific literature in 1919, by the 1930s it was being grown in North America and Europe (where it won an Award of Merit from the Royal Horticultural Society).

Abeliophyllum is used medicinally in Korea. Over-harvesting has led to it becoming almost extinct in the wild.