At times—when the gold ginkgo trees glow in the autumn light, for instance—it’s easy to overlook the ways in which the Japanese respect for nature and age are revealed in the Elizabeth Hubert Malott Japanese Garden. If you look closely, though, the effect is evocative, as seamless as a traditional haiku.

Note that the larger rocks are partially buried, as if they have been in place forever. (Rocks are believed to be the bones of the earth, an essential part of a Japanese garden). Flowering plants—such as iris, rhododendron, and plum—have a short bloom time, reflecting the yin-yang balance between the ephemeral existence of human life and the timelessness of nature. Many of the pine trees (which represent longevity in Japanese culture) are pruned and trained to give the illusion of age.

This 17-acre lakeside garden includes three islands. Only two—Seifuto (Island of Clear, Pure Breezes) and Keiunto (Island of the Auspicious Cloud)—are open to the public. Across the lake, the inaccessible island Horaijima (Island of Everlasting Happiness) is symbolic of paradise—in sight yet elusive. 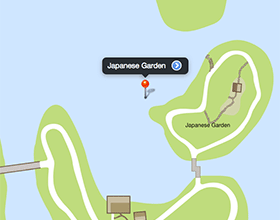