A Scientist with Orchid Fever

We all have a touch of orchid fever here at the Chicago Botanic Garden. Naturally, we wondered who among us might have the worst case (or best, depending on how you look at it). So we sent out a simple query: do you grow orchids at home? Here follows the best answer ever, from Jim Ault, Ph.D. (He’s our director of ornamental plant research and manager of the Chicagoland Grows plant introduction program.) 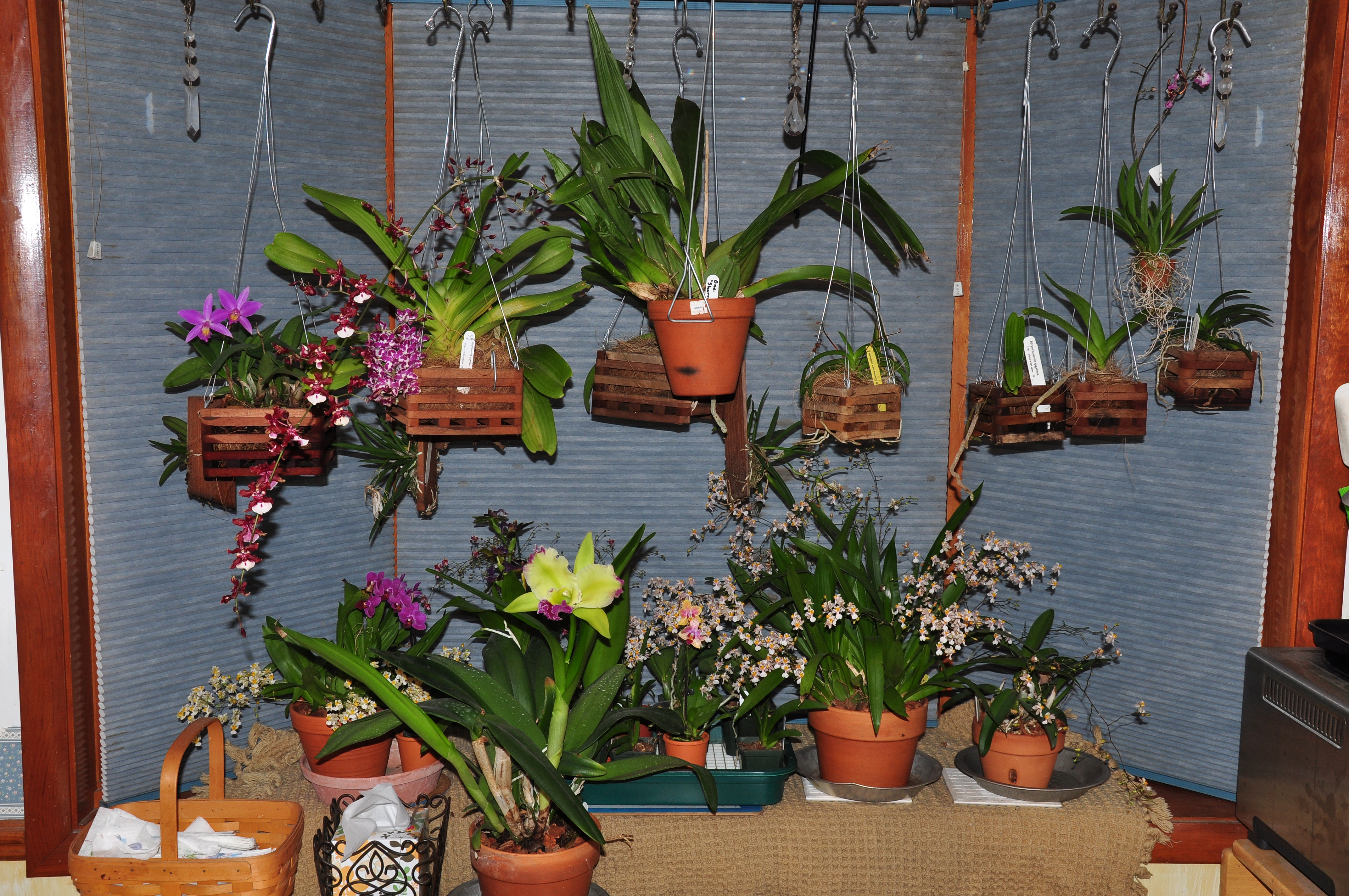 A view of the kitchen window at the Ault house.

Yes, I do indeed grow orchids at home. I haven’t counted them recently, but I’d admit to 50-plus plants.

I simply find orchids to be fascinating for their seemingly infinite variations of flower sizes, shapes, colors, fragrance (very important to me!), and for their diverse ecological adaptations (epiphytes, terrestrials, lithophytes) and the resulting puzzle of how best to cultivate them. I first got interested in orchids in the 1970s, both from seeing some in the greenhouses at the University of Michigan, and also from visiting my grandmother in Miami. She was very active in the Florida fern society of the time, and had a backyard of ferns she grew from spores, with a smaller collection of orchids. She would send me home with plants on every visit, all of which I eventually lost, as I didn’t really have a clue as to how to grow them! But I was hooked, I think safe to say now, for life.

As a graduate student in the 1980s, I had a fairly extensive collection of orchids, and was in fact breeding them and germinating their seed in tissue culture; my first breeding projects ever. This hobby actually led me to my career as a plant breeder (of perennial plants) today. I was a member of the Baton Rouge Orchid Society for five or six years, attended quite a few orchid shows and meetings, gave lectures on orchids, and had the chance to visit some of the venerable orchid businesses like Stewart Orchids in California, Fennell’s Orchid Jungle, and Jones and Scully in Florida at perhaps their peak heydays. But my orchid collection had to be abandoned in the late ’80s when I moved to Pennsylvania. Most were sold to a nursery in North Carolina, and some were donated to Longwood Gardens, where I worked from 1988 to 1995.

My orchid hobby came and went multiple times over the intervening years (decades), mostly from a lack of appropriate space to grow them, time, etc. But starting about three years ago, I began seriously accumulating plants again. There was a bit of a learning curve, as many of the hybrids I knew were no longer available; there has been an explosion of breeding new orchid hybrids, many of which were unknown to me; and also orchid names are changing rapidly due to modern DNA technology being used to revise their nomenclature. Just figuring out where to buy plants was an adventure, as most of the orchid nurseries I knew were long gone. 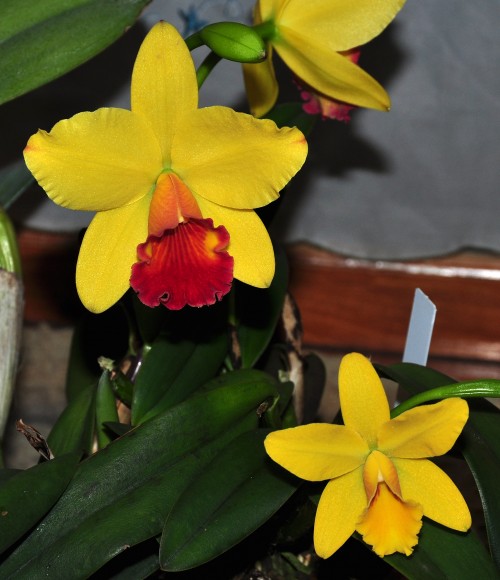 Currently I grow mostly Cattleya alliance species and hybrids, with an emphasis on the “mini-catts” or miniature Cattleyas, and also a smattering of the larger Cattleyas. Among my favorites of this group are Cattleya walkeriana selections with their heady mix of cinnamon and citrus fragrance (to my nose) and their hybrids like Cattleya Mini Purple; various species formerly in the genus Laelia such as Laelia pumila, (= Cattleya pumila), Laelia dayana (= Cattleya bicalhoi), Laelia sincorana (= Cattleya sincorana), and other closely related jewels of the orchid world.

I’m excited to have in bloom right now the diminutive Sophronitis coccinea (= Cattleya coccinea) with oversized, 2-inch wide flowers of an intense orange-red on a plant no larger than 3 inches tall. S. coccinea is a challenge to grow at all, let alone grow well, but its hybrids are much easier to cultivate, and strut their stuff with flamboyant flowers in deep red, orange, purple, and violet, often produced two and even three times a year.

I also grow a modest number of other species and their hybrids, mostly Neofinetia falcata, Rhynchostylis gigantea, and related hybrids. 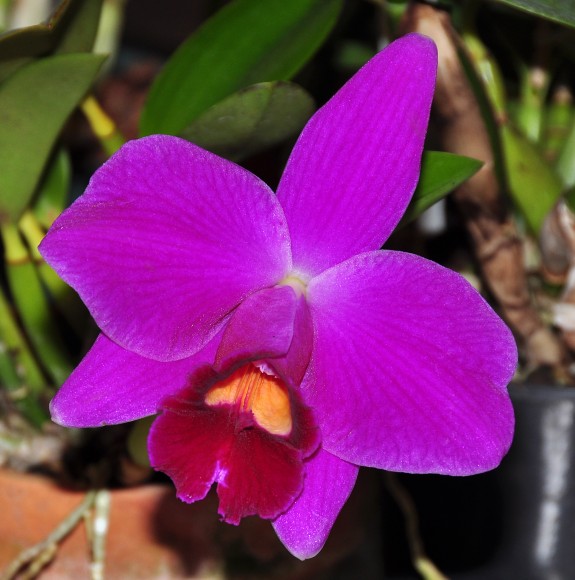 I grow most of my orchids in bark mixes, some in New Zealand sphagnum. I use both plastic and clay pots as well as plastic or wood baskets. I prefer the latter as the plants respond best to the excellent aeration around their roots that the open wood baskets provide. Unfortunately this also poses a challenge, figuring out how to hang baskets close enough to windows to provide the necessary high light needed, as well as providing sufficient humidity in the dry winter months.

My plants spend the summer outdoors on a nursery bench under a piece of shade cloth, and overwinter indoors under lights in the basement, and in nearly every south-facing window in the house! My family is to be commended for their suffering—and patience—after finding sinks and bathtubs filled with plants freshly watered, or obstructed views out windows crowded with plants. Such is life with an orchid addict. 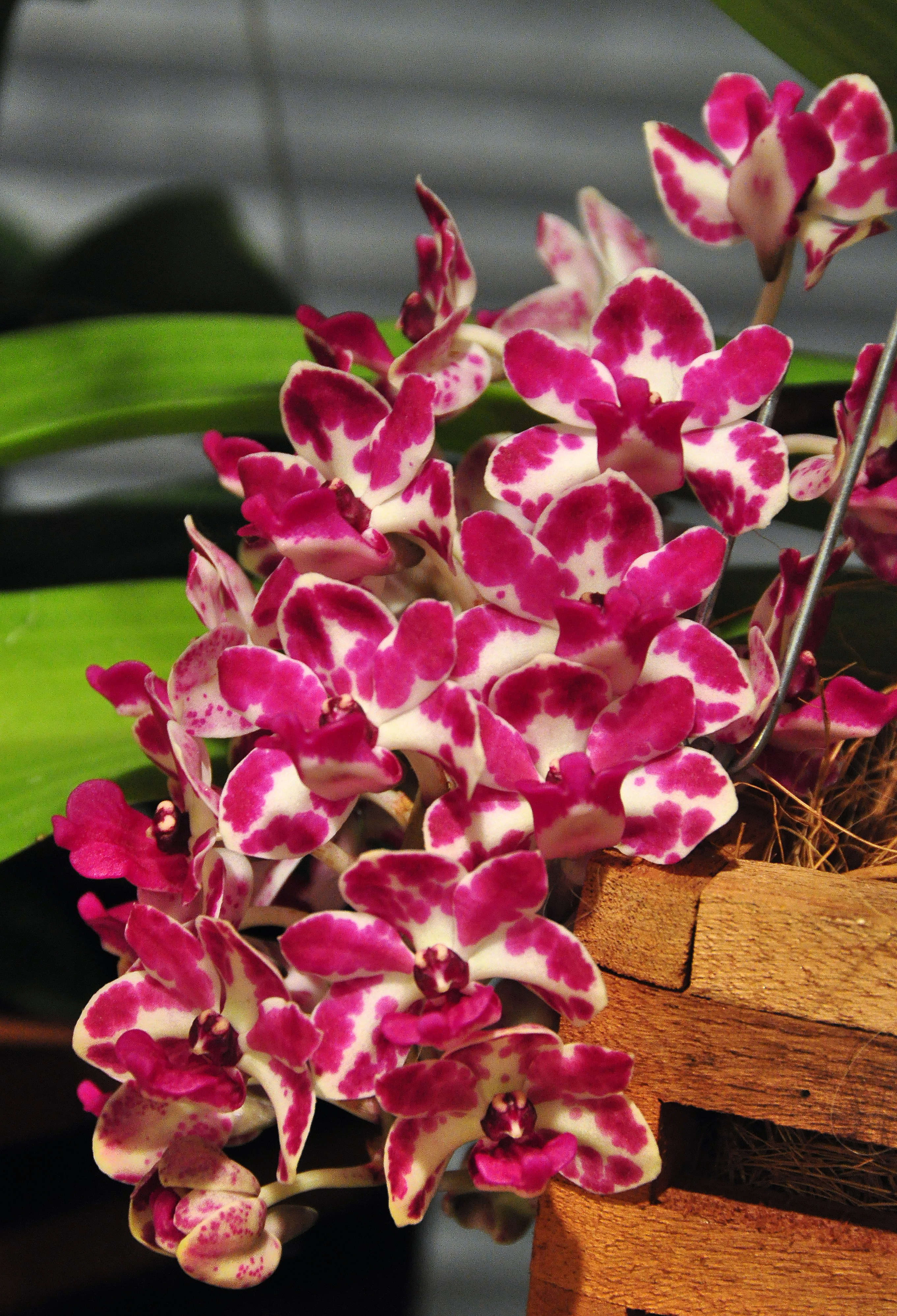