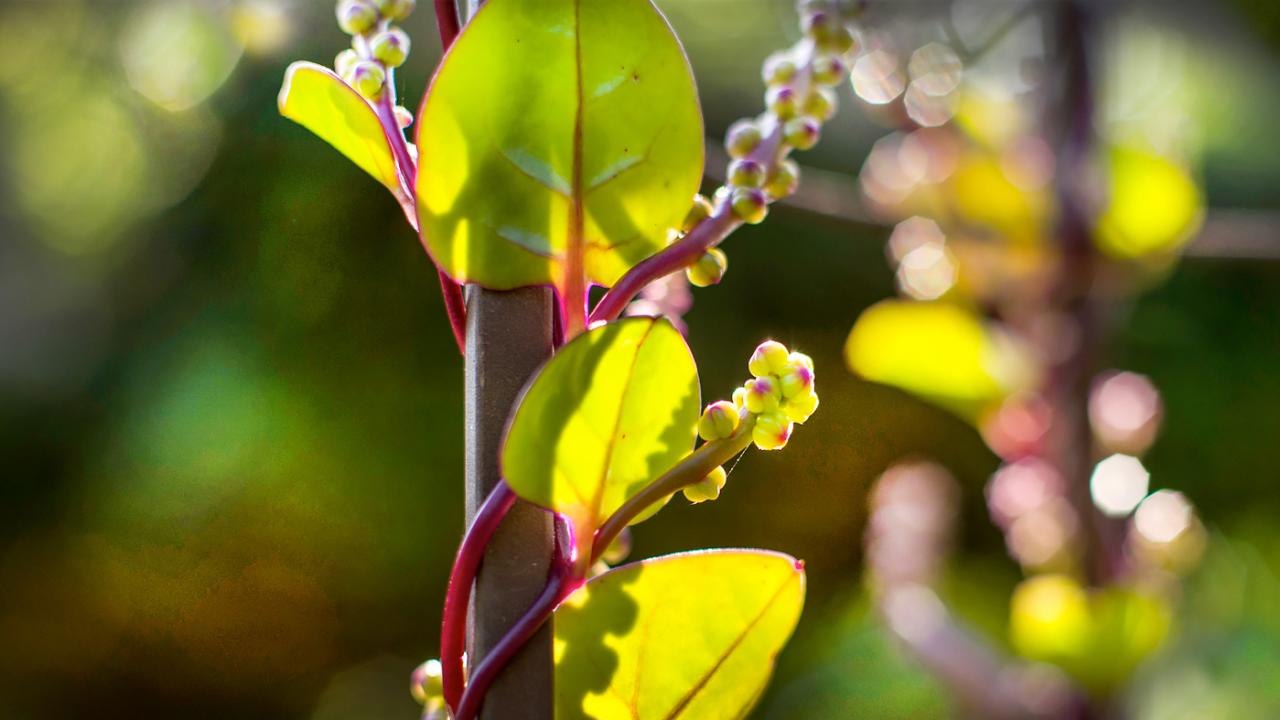 Bonsai in the Semitropical Greenhouse

In 2015, we displayed four new bonsai trees in the Semitropical Greenhouse in the Regenstein Center. 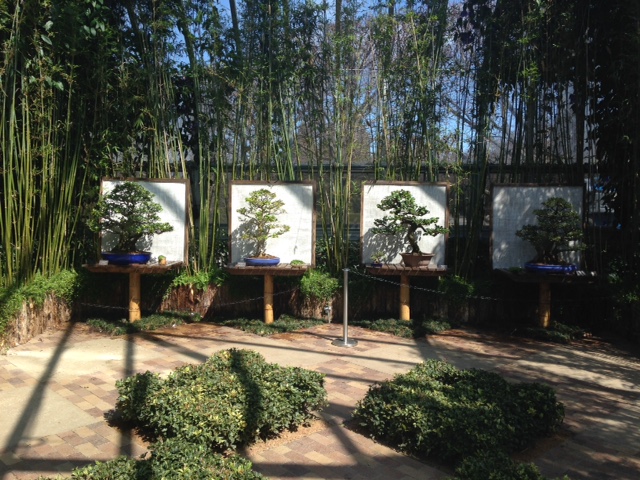 Bonsai on display in the Semitropical Greenhouse

The crape myrtle, two ficus species, and natal plum trees were on display in March, April, and May. It was the first time these trees were displayed in this fashion here at the Garden, giving visitors the opportunity to see tropical and subtropical trees that otherwise would not be able to be shown in our courtyards until late May, due to temperature requirements. 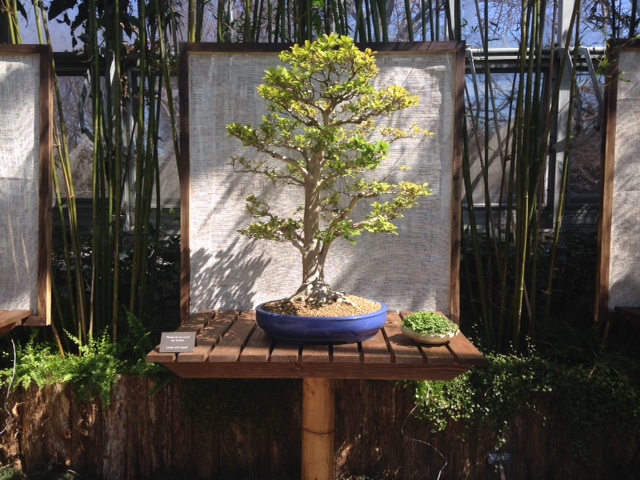 This crape myrtle (Lagerstroemia) is continuing to respond very favorably to the root work we did.

This crape myrtle (Lagerstroemia) was the focus of my previous post on repotting. It is continuing to respond very favorably to the root work we did.

Crape myrtles are a genus of about fifty species of trees and shrubs native to South Asia, Northern Australia, and some Pacific islands. Some varieties can grow as tall as 100 feet, but most species grow as either small trees or large shrubs. Some varieties are deciduous, and some are broadleaf evergreens—this is a deciduous variety.

Crape myrtles are most famous for their flowers, which grow as clusters of small blooms. Flowering typically takes place between June and August. This tree has never flowered while here at the Garden. I am hoping that with the addition of a more appropriate soil mix, fertilizer changes, and a longer growing season we can can encourage this tree to bloom in the years to come.

The natal plum (Carissa grandiflora) is a dense evergreen tree with sharp spines. It’s native to tropical and subtropical regions of Africa, Australia, and Asia. 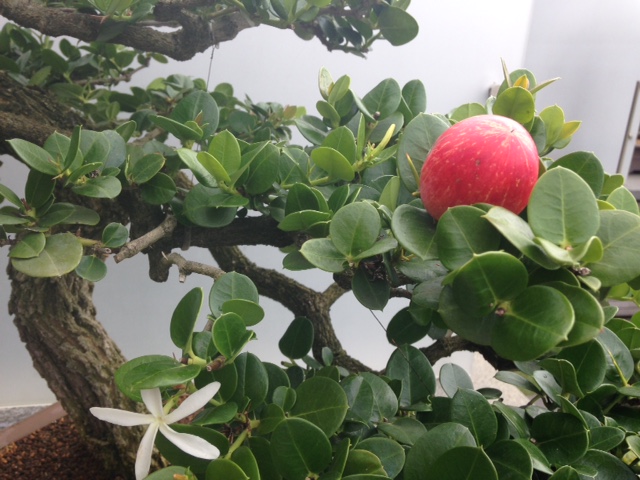 Our natal plum in fruit and flower at the same time!

Our natal plum produces beautiful flowers throughout the year. These can occur either as individual blooms or in clusters. The flowers have a powerful fragrance reminiscent of gardenia. The fruit is plum-shaped and can be red to dark purple-black in color. The fruit of the natal plum is edible and tastes like a giant cranberry—but please don’t eat ours! :) 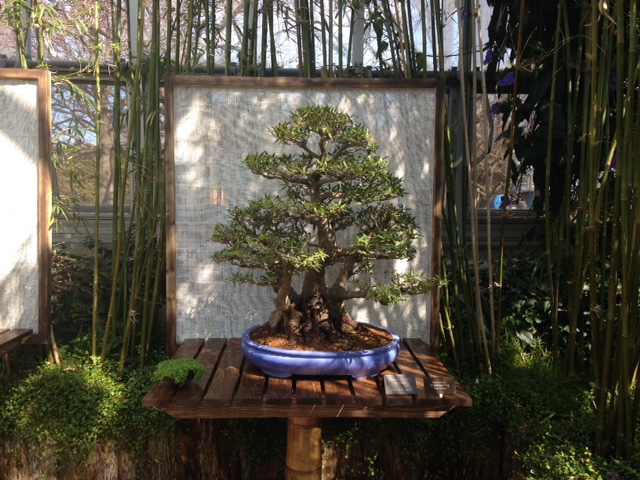 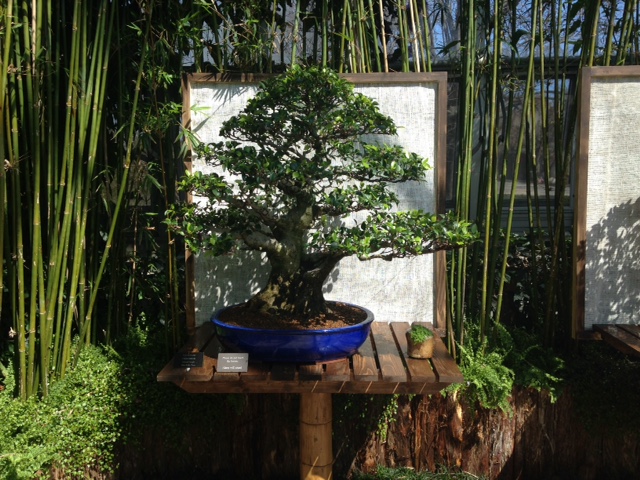 Our two ficus trees on display are monsters! The Nabari (base of the tree) on these trees are huge, and they have a great presence. Ficus are tropical and subtropical trees native to southern Asia and India. However, they are also commonly found in South American countries and the southern United States. There are hundreds of species in the ficus genus in the world, but there are only about a half dozen that are commonly used for bonsai. Ficus benjamina, Ficus microcarpa, Ficus retusa (or Green Island fig), and Ficus salicifolia are among the most frequently used. These are great examples of tropical bonsai that will love their new temporary home in the Greenhouse.

Be sure to keep a lookout for the new additions. Here is a sneak peek at one of the trees you might see…can you tell what species it is? 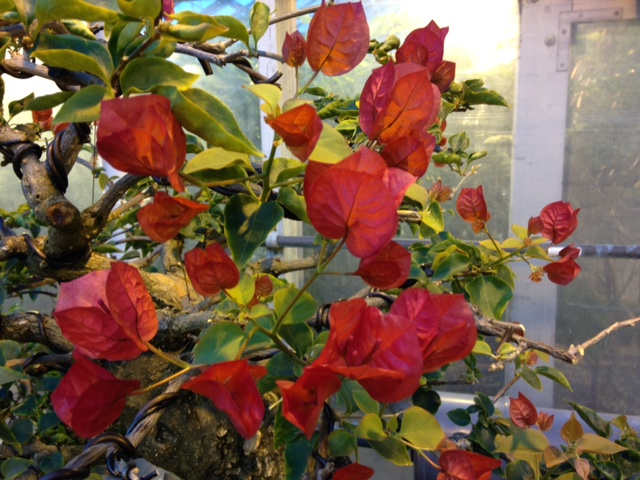 This mystery tree might be blooming soon in the Regenstein Center—can you guess what it is?

Thanks for reading, and be sure to follow me on instagram @Windy_City_Bonsai for updates and pictures of the collection!