Well, here we are with another titan arum in bloom at the Chicago Botanic Garden. (Java, the taller of our Titan Twins, began blooming at 8:28 p.m. on May 30.)

We never really considered the possibility that we might have two plants developing inflorescences at the same time. But it did not take too long to brainstorm some ideas on what we hope to learn from this rare possibility.

The plants have been named Java and Sumatra, in recognition of two of the major islands in the nation of Indonesia. Amorphophallus titanum, the Latin name for the titan arum species, is native to the island of Sumatra.

The corms of the Titan Twins were almost identical in weight when they were measured several months ago; the young inflorescences emerged from the soil within 24 hours of each other, and until recently, they were within an inch of each other in height. On May 18, Java became—and remained—the taller of the two. 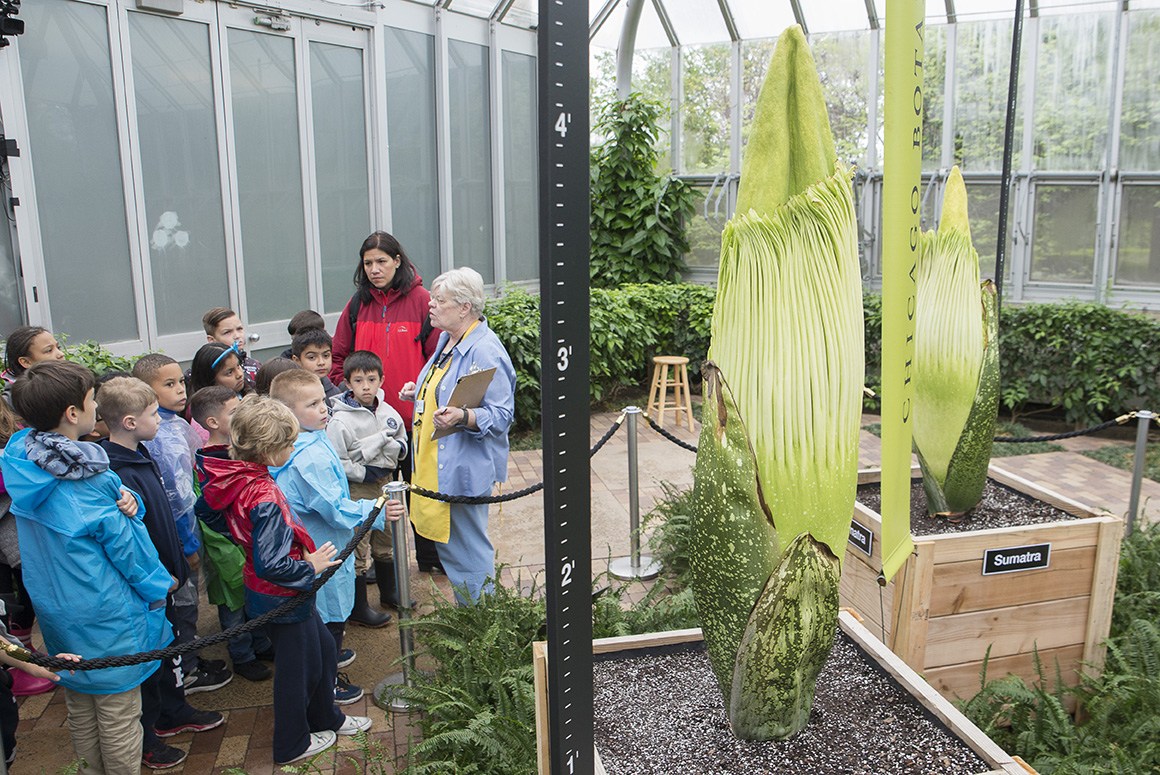 So what will we do to take advantage of possibly having two sibling plants coming into flower at the same time? We can’t cross-pollinate them, because this species has an incompatibility system that prevents successful fertilization between closely related individuals. Even if this weren’t the case, we want to maintain the highest levels of genetic diversity when producing offspring of this rare species—a conservation practice common among captive breeding programs of animals in zoos. (The Garden began collecting titan arums in 2003, as part of a worldwide conservation effort to preserve the species.) We do hope to pollinate one of the titan arums with pollen from an individual from another institution that has been stored “on ice” for just such an occasion.

Having two plants blooming at nearly the same time allows us do an experiment to answer a question about what happens to the inflorescence just after pollination.

When Alice the Amorphophallus and Sprout bloomed at the Garden (Alice in September 2015 and Sprout in April 2016), we wondered if pollination of the female flowers influences how long the plant generates odor and heat. It is possible that when pollination takes place, it signals the plant to save energy and stop these energetically expensive processes. After all, pollination of the female flowers basically signals to the plant, “job well done.” Perhaps at that point, there’s no need to continue with the energy-intense display. 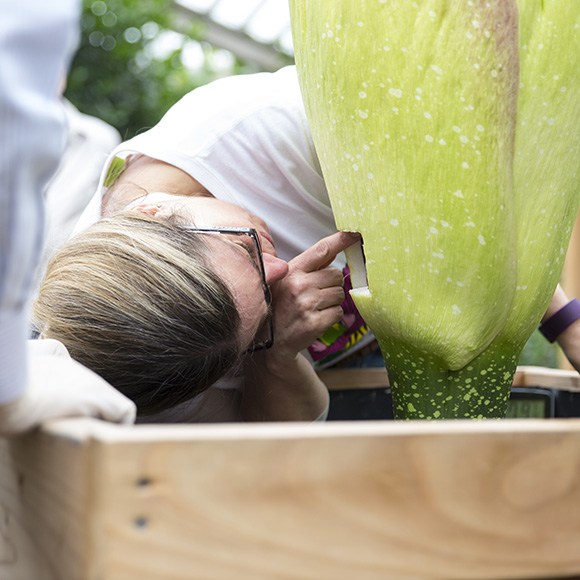 Dr. Pati Vitt checks out the pollination situation on our April 2016 bloom, Sprout.

With two plants from the same parentage blooming at nearly the same time, we can do the experiment that could answer this question. We will not pollinate Java, the first plant that came into bloom, and then pollinate Sumatra, assuming it does open. We will record heat at regular intervals through use of a thermal camera and determine if the unpollinated inflorescence produces heat for a longer period than the pollinated one. Measuring odor production will be a bit more subjective—that will require sniff tests, and an abundant supply of fresh noses. Hopefully we will find some volunteers!

We have nicknamed these corpse flowers the Titan Twins because they grew from seed from the same parent plant.