Riley Obenchain conjures a feeling of mischief and magic.

He wears a tattered straw hat, trimmed with a red poppy, that looks like something a scarecrow might wear. His bushy black eyebrows dance when he talks, bringing to mind the woolly bear caterpillars abundant in the fall. A playfulness—tinged with the macabre—also shows in the jack-o-lantern characters Obenchain created for HallowFest, the Garden’s former celebration of Halloween. 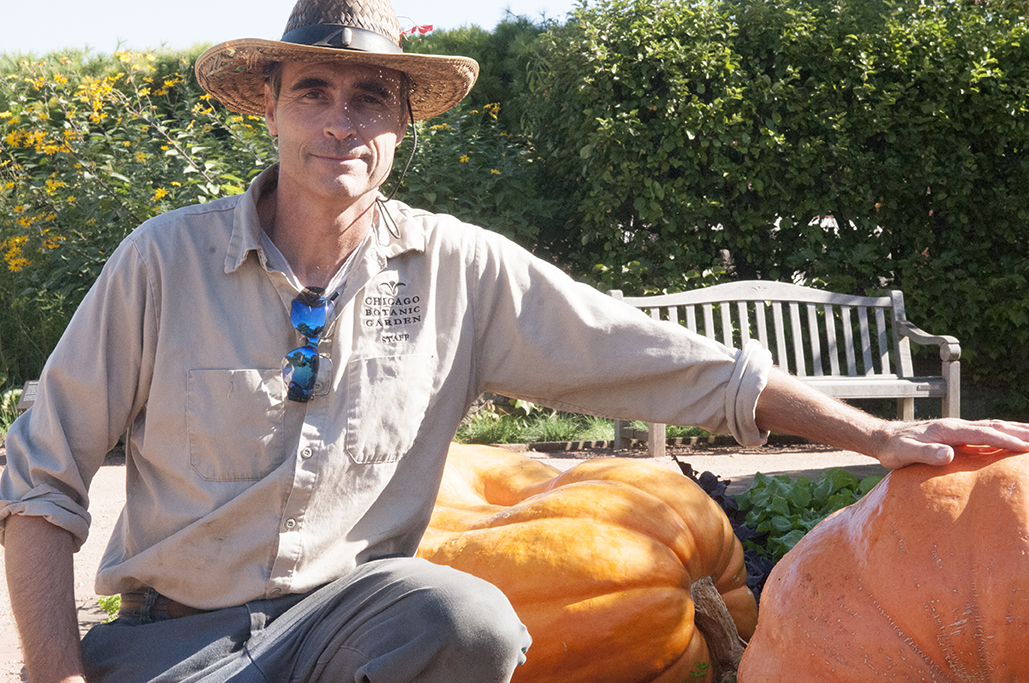 Obenchain’s ghoulish, yet somehow gallant, jack-o-lanterns provide a mild dose of horror while eliciting smiles and laughs. There’s the tiny pumpkin gripped in the long, pointy teeth of a massive pumpkin. The little guy has a sort of “Oh, no, Mr. Bill” look on his face. The big, toothy smile on another jack-o-lantern gives a mixed message. Obenchain describes it as an “I’m-happy-to-see-you-because-I’m-going-to-eat you” look.

“I get a lot of, ‘Wow! I could never do that!’” says Obenchain, who’s helped keep the Garden’s trams, lawnmowers, and other machinery running smoothly for 35 years, “but in actuality, anyone can do this.” Here are a few of Obenchain’s tricks and techniques, gleaned in a recent interview.

Where do you get your inspiration?

A lot of times, the shape of the pumpkin has the idea. The pumpkin determines what you’re going to carve. How is it going to sit? Is it a “Bert” or an “Ernie”? (A Bert has a more elongated shape, while an Ernie has a round, well, pumpkin head. Obenchain is cultivating a large pumpkin this year that has a sort of crocodile look to it.)

What are your favorite tools?

I like using old-fashioned steel knives. (The steel is more rigid than stainless steel. Obenchain uses a range of sizes and keeps them sharp. He taps them into very thick pumpkins using an old hickory log that he’s kept for years. Toothpicks, bamboo skewers, or even the occasional nail can be used to patch mistakes. A trowel with a sharpened end makes a good seed scooper.)

What sorts of other materials do you use?

Long, skinny gourds for antennae. Gourds for ears and eyes. One year I used a forked stick for the tongue of a snakelike pumpkin. (Obenchain shows photos of jack-o-lanterns carved by nephews under his tutelage. One looks a little worse for wear, with crosses for eyes and an arrow through its temples.)

What is the biggest pumpkin you’ve ever carved?

An Atlantic Giant squash (Cucurbita maxima ‘Atlantic Giant’). It topped out at 1,010 pounds. (The record-breaker could cover a small table top. Obenchain needed a hand-pruning saw to carve its foot-thick walls. The big galoot had to be moved with a forklift. Another behemoth was so long that Obenchain had to crawl inside to scoop it out, creating the ultimate Obenchain image—a man-eating pumpkin!) 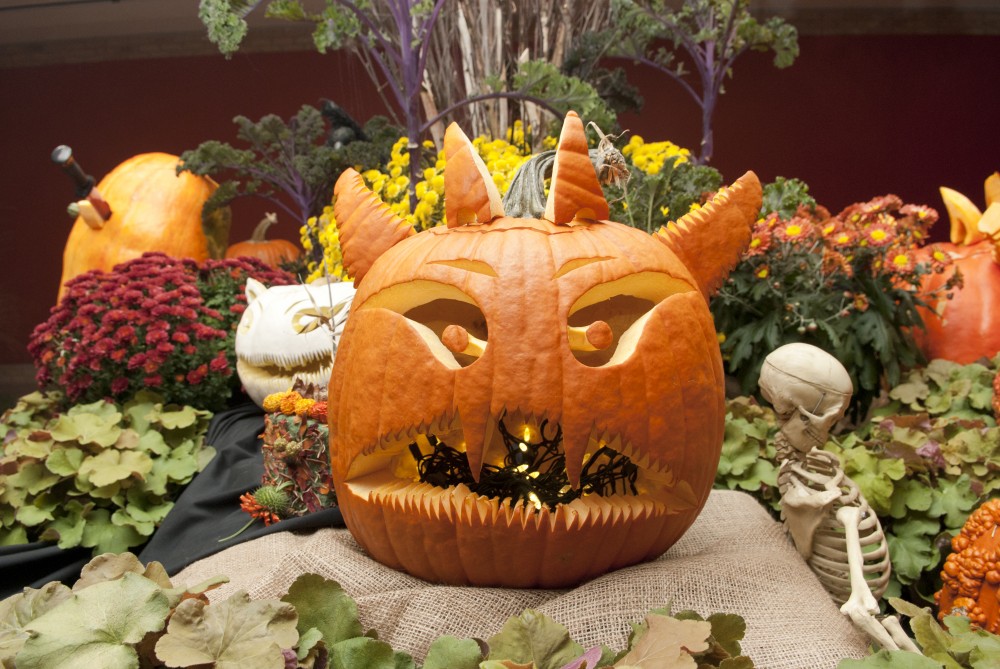 Carving stalks instead of using toothpicks to inset eyeballs ensures they don’t rot out and stay in place while your jack-o-lantern is on display.

While most of the pumpkins carved for HallowFest were from outside growers, each year, Obenchain tried to grow a few giants of his own in friendly competition with other Garden staff members. That year, he planned to grow another ‘Atlantic Giant’ with seeds saved from the thousand-plus-pound monster—if the raccoons don’t get it first! 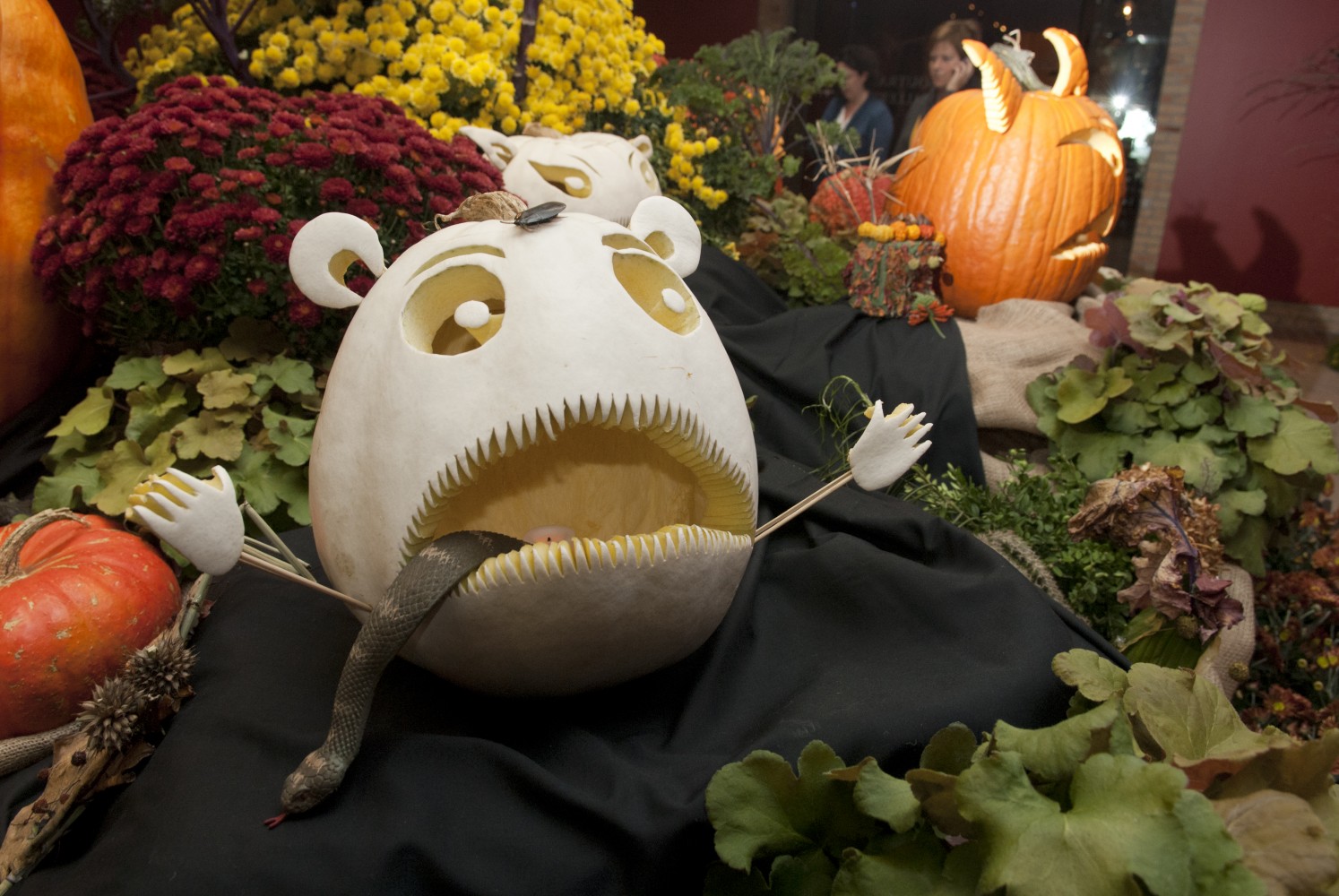 The removed pieces of the eyes of this “Ernie” are recycled as ears; leftover mouth pieces are used for hands.