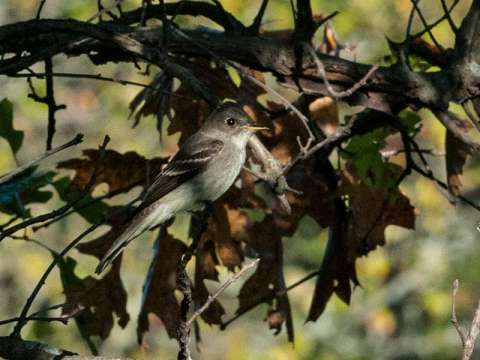 Description: Look for this woodland-nesting flycatcher in the McDonald Woods or in the Barbara Brown Nature Reserve.

In summer, seek the shelter of the trees' shade in McDonald Woods at the Garden. Have a seat on one of the benches and listen for the pewee, a bird much more easily heard than seen. Even on a warm summer day, the eastern wood-pewee sings his melancholy refrain. "Pee-a-wee. Pee-er. Pee-a-wee."

This denizen of native woodlands in Illinois belongs to the flycatcher family. Many flycatchers sit on a snag, then sally out to snatch an insect full of protein.

The pewee sports gray-olive upper parts and pale gray underparts, with two whitish wing bars. Males and females look alike; young of the year have buffy wing bars. If you get a really close look, you'll notice the adult pewee has a dark upper mandible and dull yellow-orange at the base of the lower mandible.

This bird spends the winter in Central and South America, where it can get plenty of insects to eat. It returns to the Chicago Botanic Garden and northern Illinois sometime in May to raise a family. The female builds a well-camouflaged nest of grass, plants, fibers, and lichens bound with spider webs on a horizontal branch of a deciduous tree.

If you're lucky in July and August, you might see the wood-pewee teaching its young to snatch flies, bees, wasps, and butterflies from the air. In September, family groups begin migrating southward.

The eastern wood-pewee's numbers are declining, possibly due to habitat loss both on breeding and wintering grounds. The Cornell Lab of Ornithology considers this bird a species of conservation concern.

Restoration of the pewee's open woodland habitat—which is being done at the Garden's McDonald Woods—can help keep the pewee from further decline.

Different flycatcher species feed at different levels in the forest canopy, so they don't have to share eating space. The eastern wood-pewee feeds lower than the great crested flycatcher, another bird that has nested at the Garden. The pewee feeds higher in the canopy than the least flycatcher, which migrates through the Garden in spring and fall.