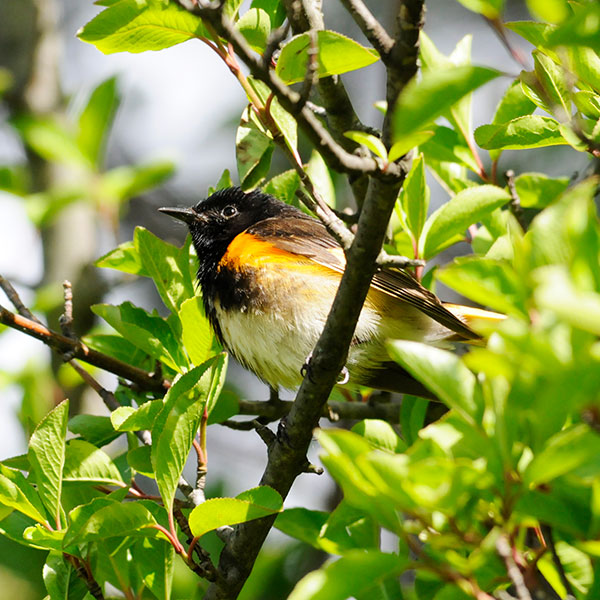 In spring, you can witness the magical, mysterious migration of songbirds. Trees and flowers open their leaves and begin to bloom, inviting insects to taste their nectar and munch on their burgeoning greenery. Thank goodness for the songbirds, who keep the insect population in check by devouring scores of the protein-filled creatures to gain the energy needed to make their long journeys to their breeding grounds and raise their young.

Ducks begin migrating in March, and some linger into April and early May. But April and May are the months for viewing migratory songbirds, which belong to the avian order Passeriformes, meaning small bird or sparrowlike. A songbird possesses a complex vocal organ called the syrinx, which enables it to produce various notes, sometimes more than one at a time. Most songbirds also have one toe pointing backward and three others pointing forward. When a songbird perches, muscles help the toes wrap around the branch to grip it. 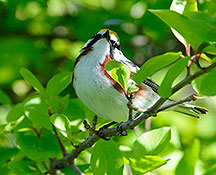 At least 6,000 species of songbirds, likely more, exist in the world. Many of the songbirds we see at the Garden are called neotropical migrants since they spend winters in Mexico, South America, and other places where insects are available year-round. These songbirds live in close quarters with the native Mexican and South American species, but when nesting time comes, birds need more space, and that's likely one reason why birds have evolved to migrate.

In spring, every bit of greenery helps migratory songbirds as they seek shelter and food. Birds also follow corridors during migration, for example, along Lake Michigan, and along rivers, including the Skokie River at the Garden.

In April, the first wave comes through. Sparrows, kinglets, early thrushes, and early flycatchers sing and hunt for food. At least 16 different sparrow species have been observed at the Garden. In May, you'll find more types of flycatchers as well as tanagers, orioles, and up to 36 different species of warblers. More than 251 species of birds have been seen at the Garden, and many of them have been found during the spring and fall migrations.

The best places to look for migrant birds in the area are near water and edges, such as woods next to a shrubby area. Here are some favorite songbird migration spots that local birders find productive: McDonald Woods, Sensory Garden, Thomas English Walled Garden, and the Waterfall Garden.

Often a songbird is named after its plumage. For example, the scarlet tanager is scarlet-colored with jet black wings, and the yellow-rumped warbler has a yellow rump.

When so many birds are flitting around, you can get distracted and not key in on some identification clues. First, find a perched bird on which to focus, and ignore the rest. Then put your binoculars to your eyes. Look at the bird's overall color and if it has wing bars. Note different colors on its chest, head, and shoulders. Write everything you see on a piece of paper and then look in your field guide immediately to find the species. Then you can go on to the next bird. Take your time and enjoy the hunt! And remember, birds do fly—you're not always going to identify every bird you see before it leaves your field of vision.