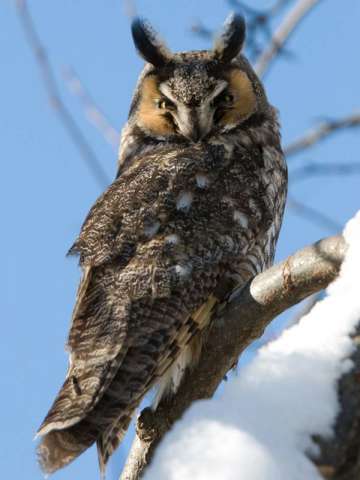 Description: This nomadic owl appears erratically and may be seen in conifer plantings or in the McDonald Woods.

Long-eared owls are nomadic birds, found abundantly some years and difficult or impossible to find others. Choosing their locations based on prey abundance (small mammals, like mice and voles), they often form fairly large groups in winter roosts where a dozen or more birds can be found together. They are also known to perform a broken-wing act in order to draw predators away from the nest sites, not unlike the behavior many people associate with the kildeer.

Like most other owls, they do not build a nest, but use the abandoned nests of other larger birds, like crows or hawks. When threatened at close range, they will extend their wings to the sides and rotate the top surface of the wing forward while swaying from side to side to make themselves look much larger and more menacing than they actually are.