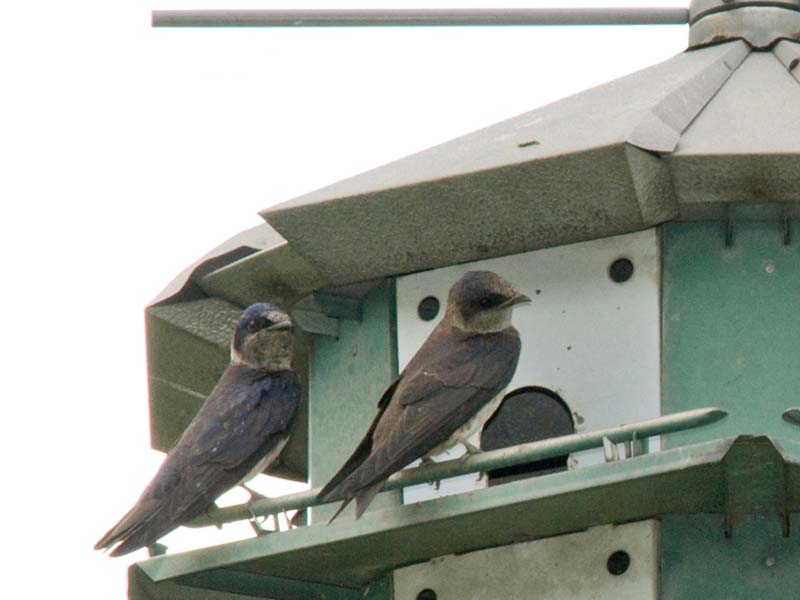 Description: The Garden's largest member of the swallow family is the purple martin. Look for them flying around or perched on the large, aluminum birdhouses on poles at various locations around the Garden.

Anyone walking the Garden perimeter in spring and summer is sure to notice the mini apartment complexes filled with purple birds flying in and out of their homes and calling “pew-pew.”

These purple martins, fascinating to watch, would not be here if it weren’t for the man-made apartments carefully tended by Garden staff, including Jim Steffen.

Purple martins once nested in natural tree hollows and other crevices near wooded ponds and marshes. Today, due to the decline of natural habitat, nearly all of the purple martins in the eastern United States rely on nest boxes in which to raise their young.

These birdhouse complexes need to be carefully placed high on a pole in an open area near water.  They need to be cleaned and removed every winter to keep nonnative house sparrows from taking over. If the houses are cared for properly, the martins will return year after year to the same place to raise their young, which is exactly what they do at the Garden.

Purple martins spend the winter in South America, and migrate to Illinois in early spring. The males come first—a few of them arriving as early as March—all wearing their bold purple plumages. The females, with lighter purple on top and sooty gray underneath, return when most of the males are already here. Both adults bring feathers, grasses, string, and mud to form a wall from the entrance to the back of the nest box. They bring fresh green leaves to the nest daily. The female lays four to five white eggs, which she incubates for a little more than two weeks. Next are a busy four weeks for the adults, who must constantly feed regurgitated insects to their offspring.

It’s exciting to watch when the young martins are ready to fledge. All adult martins in the community join to encourage the youngsters to peek their heads out of their homes, flap their wings, and take their first flights.

Purple martins gather in large flocks in the fall, often roosting in large numbers. By September they are back in South America, where they remain until it’s time to return to the Garden the next spring.

Purple martins eat only insects, and mostly while they are flying. Watch the martins snatch insects in the air and dip their bills into the lagoons for a drink. Purple martins have been lauded for eating mosquitoes, but that’s just one part of their diet—they also eat damselflies, dragonflies, grasshoppers, beetles, and other insects that are high in protein.