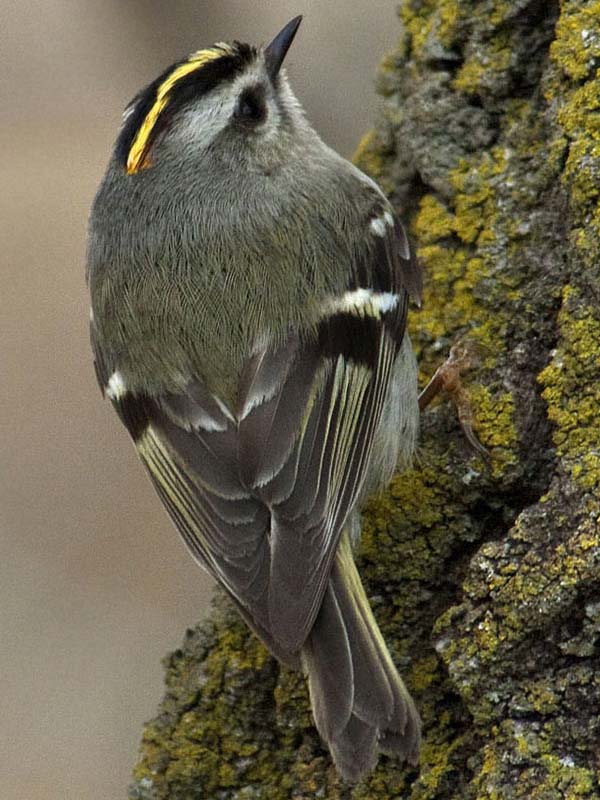 Description: This tiny migrant is most often seen in wooded areas in very early in spring and late in fall.

One day in early spring, two dainty birds, just 4 inches long, wearing golden crowns on their heads, flitted below eye level among the still-bare branches at the Helen and Richard Thomas English Walled Garden. Using their thin, tiny bills, they snatched the first of spring's emerging insects and larvae hidden in branches.

These golden-crowned kinglets seemed fairly tame as they searched for food, giving the observer a chance to see their bright golden heads, and even the red color atop the male's head he flares when excited.

Two kinds of kinglets migrate through the Garden in fall and spring: the ruby-crowned, which has a red crown, a white eye ring and two white wing bars; and the golden-crown, which has a white eyebrow and a black border around its golden crown.

The heartier golden-crowned kinglet arrives ahead of the ruby-crowned in spring and leaves later in fall. A few may spend winters in Illinois, seeking the company of chickadees, brown creepers, and woodpeckers, skilled at finding food in the colder months. Golden-crowned kinglets eat insect eggs and adults, including aphids and bark beetles, which they find in twigs, bark, evergreens, and bushes.

Sometimes you'll see them in deep woodlands, other times in backyard gardens. They seem playful and lively as they grab flying insects or larvae hidden in a branch's nook. They'll snatch food right side up and upside down.

Golden-crowned kinglets once nested only in the boreal forests of North America, but they have expanded their breeding range southward and have even been documented occasionally nesting in northern Illinois. They may spend winter as far south as northern Mexico, but many remain in the United States year-round.

April and October are prime months for seeing golden-crowned kinglets at the Garden. When walking past conifers where they often feed, listen for four soft, high-pitched notes, and see if you can find one of these avian gems.

Golden-crowned kinglets keep warm during cold winter nights by snuggling. That's what well-renowned author and scientist Berndt Heinrich discovered when he studied kinglets to see if, as he speculated, they slept in squirrels' nests at night in winter. He found no evidence of that; instead he discovered something else more intriguing—groups of kinglets huddling tightly together throughout the night in a spruce tree. They had their tails turned outward and their heads tucked into their feathers, appearing almost as if they were one larger bird. Big birds have a lower surface area to body size ratio and can maintain heat better than a small bird. So the key for a kinglet to keep warm is to cuddle.