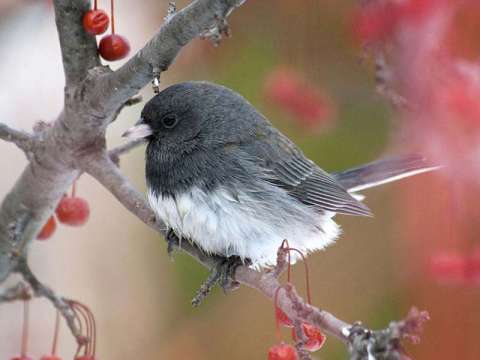 Description: The junco is a very common migrant and winter resident. It can be found in most habitats at the Garden.

The junco is about the size of a sparrow, and is closely related to that family. The male is dark gray with a white lower breast and belly. The female has brown tones atop the gray. Both have dark brown eyes and pinkish bills. When they fly back and forth from shrubs to conifers to grasses, juncos flash white outer tail feathers, like a glint of freshly fallen snow.

Juncos breed in boreal forests in the northern United States and Canada and in higher altitudes in parts of the western United States with coniferous and mixed coniferous/deciduous forests. They feed on the ground, pecking at insects and seeds and using their feet to scratch leaves away to reveal hidden morsels. When autumn comes, juncos migrate to places where they can find food that is not completely covered with snow. In winter, their diet consists mostly of seeds, both in the wild and from backyard feeders. In natural areas, they find seeds that fall onto the snow from grasses and other plants. Juncos roost in conifer trees at night. At the Garden just before dusk, these birds fly into evergreens for their evening sleep. The Dwarf Conifer Garden offers some respite for these hardy winter birds.

Though juncos seem numerous, the population of this species is declining, and ornithologists aren't certain why. Seeing these handsome snowbirds offers a bit of comfort and cheer on a cold, winter day.

Juncos feed in a hierarchy, with adult males first, followed by young males, adult females, and finally young females. During winter, juncos try to establish dominance either at feeders or in the wild. Individual birds flick their tails and lunge at one another to establish their pecking order. Females typically migrate farther south than males in winter, so they can have feeding territories to themselves without being hassled. When winter breaks, males fly ahead of the females, who arrive when males have already established breeding territories.