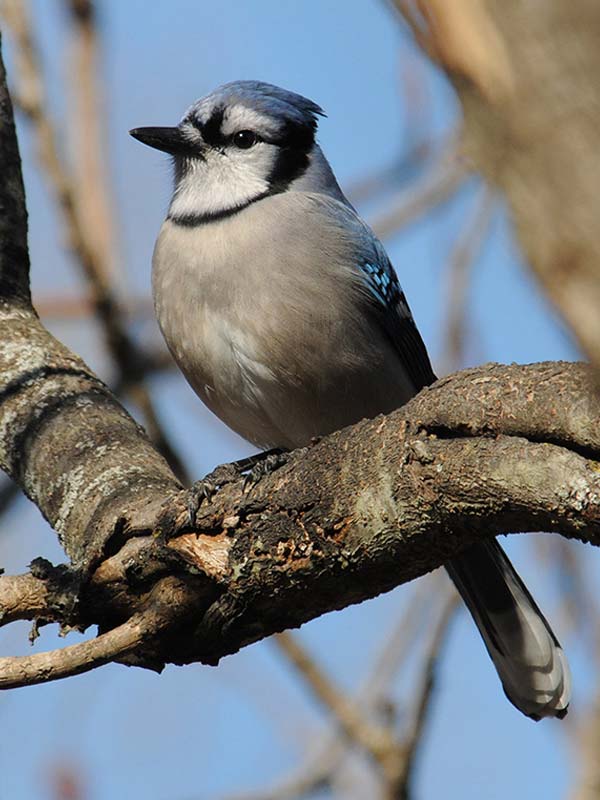 This attractive member of the crow family can be seen and heard around the Garden.

The blue jay is undisputably a handsome bird. With its deep blue plumage and matching crest contrasting with a white belly, a blue jay serves as a beacon of color on a cold, leafless winter day.

Though this species has a bad reputation for robbing eggs from other birds' nests, squirrels and crows, in turn, raid the nests of jays.

There's much to admire about the blue jay, which belongs to the Corvidae family, one of the most intelligent of bird families.

The blue jay builds a bulky nest of twigs in a tree or tall shrub. The female incubates four to five eggs. Her mate feeds her while she's on the nest. He also helps feed the young. Blue jays can be raucous, and their “jay jay jay” screech can be heard for quite a distance. During breeding season they become quiet, especially when near their nests.

Blue jays also imitate the two-syllable scream of the red-tailed hawk. Many a birder has been fooled into thinking a hawk was around, and discovers a blue jay instead.

The West Nile virus has affected many bird species in the Corvidae family, including the American crow and the blue jay. A dead or sick jay or crow alerts humans to the possible presence of the virus in a certain area.

Blue jays are omnivores; they eat seeds as well as insects and other critters. Though blue jays are often at the Garden year-round, they are actually migratory, especially in the colder regions of the United States. During winters when oaks produce few acorns, blue jays move southward, while during winters of high production, more blue jays remain in wooded forest preserves like the McDonald Woods.

If you hear a flock of squawking blue jays, follow them and you might spot an owl. Blue jays seem to enjoy harassing great horned owls. A group of jays will dive bomb the owl at its perch until it finally flies away. The owl may land in another tree, only to be harassed again until the jays grow tired of their game.

Ornithologists speculate that jays attack owls because owls might prey on the jays' eggs and young.