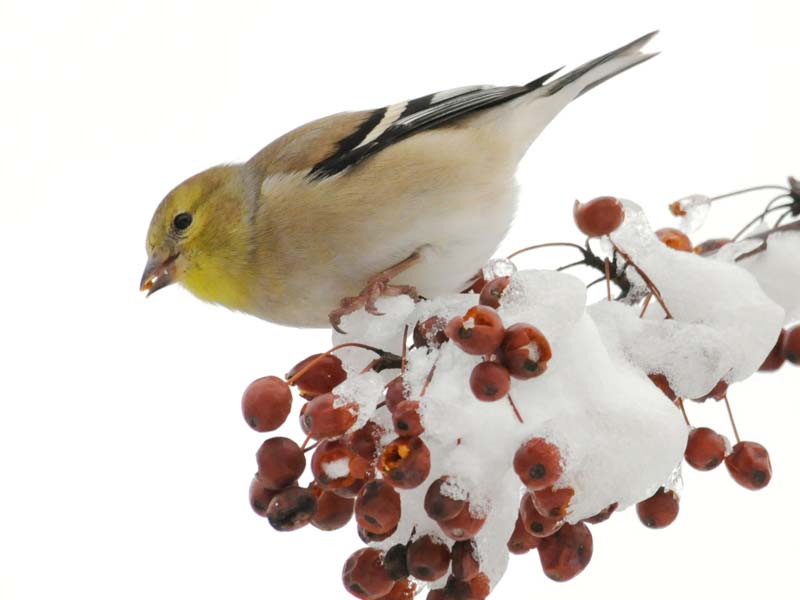 Description: These bright yellow "wild canaries" can be found in the Dixon Prairie and elsewhere. In their greenish winter plumage, this small, common finch can be found with flocks of siskins and redpolls in birches and alder or at bird feeders.

On any day of the year at the Garden, you might hear the friendly “perchickoree” song or the “potato-chip” call of the American goldfinch as it flits in undulating fashion to trees, shrubs, and grasses. The 4-inch-long bird has a slightly forked tail and short, conical beak.

In winter, the males look a lot like the drab-olive females. But come spring, the male begins to get blotches of yellow on his body until he finally molts into his golden spring and summer plumage. His head and forehead turn dark black.

While robins, cardinals, and doves have already raised a brood and may even be starting on a second one in July, goldfinches are just starting to nest. The reason? The goldfinch uses thistle down, which isn't available until midsummer, to construct its nest. Thistle down is a soft, feathery material that protects the fruiting part of a thistle plant. Many varieties of thistles, both native and nonnative, grow in the northern Illinois region.

Goldfinches are among few songbirds that feed their nestlings mostly seeds rather than insects. Thistle seeds aren't available in the wild until later in the summer, so they have to time their nesting accordingly.

In summer, walk along the Dixon Prairie to observe male goldfinches singing and performing acrobatic rituals in the sky to attract a mate. If a female likes what she sees, she'll join the male in the air and fly with him in wide circles as he sings.

The female weaves a tight nest of down and other plant fibers in a tree or shrub 2 to 30 feet high. She incubates four to six eggs for about two weeks, never leaving the nest and relying on the male to bring her food. Both parents stuff regurgitated seeds in the young ones' mouths. Roughly 17 days after they hatch, the young fledge. But even in September, young goldfinches are sitting atop thistles begging to be fed. The young quiver their wings and give high-pitched sounds to attract their parents' attention.

The American goldfinch is a true acrobat when it comes to feeding. Watch as it flies to a thistle, clings to the stalks with its agile feet, and carefully extracts the seeds.

In winter, American goldfinches hang from alder and birch trees while extracting food from the catkins.